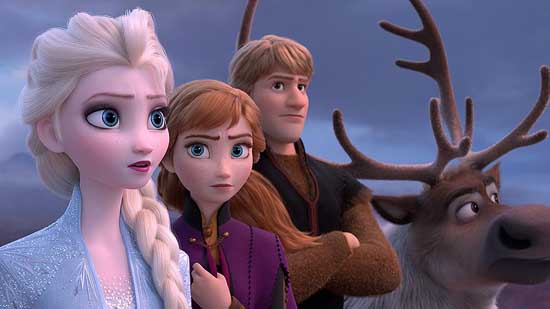 The shiniest new weapon in Disney’s all-out woke culture war, Frozen 2, which comes out later this month, will teach your toddler to be a better man and encourage you to buy that electric car. Will that make for a good cartoon?

The first Frozen came out six years ago and it was met with near-universal praise and acclaim. Yes, some thought it had a subversive feminist and possibly even pro-LGBT agenda. The idea of Elsa’s dangerous powers being repressed in secret was awfully reminiscent of the X-Men films, a comic book franchise embraced by pretty much every minority group that feels ostracized in some way. But, aside from some whispers here and there, almost everybody enjoyed the original Frozen. That was six years ago. Before Trump, Brexit, and #MeToo happened.

Idina Menzel, the Broadway phenom who plays Queen Elsa, said of the film’s male lead that he is “sort of fighting this toxic masculinity and making him really comfortable with his emotions, making him be real supportive of the women in his life and not telling them what to do.” In other words Kristoff, who is ostensibly a Scandinavian iceman, is one of those huffsplainers who wears shirts that say “This is what a feminist looks like.” I have no idea how a guy like that could make a living cutting and selling ice but apparently that’s what Disney thinks the world needs now. Long gone are the days of Aladdin’s rebellious diamond in the rough…oh, wait… Disney literally just made a billion dollars repackaging and rereleasing that story six months ago. Mena Massoud may not be Arnold Schwarzenegger but his Aladdin was still more interested in sweeping Jasmine off her feet than he was concerned with “being comfortable with her emotions.”

But that’s just the tip of the Iceberg. The plot of Frozen 2 is entirely a piece of climate change propaganda. The Telegraph put it best when they wrote that Parents should prepare themselves for catchy tunes and “being blamed for the destruction of the planet.” The plot is all about how Queen Elsa and Princess Anna’s ancestors were colonial monsters who gave the environment no regard. Disney thinks this will appeal to all the little Greta Thunbergs running around.

Of course this isn’t really anything new in terms of animated fare. When I was a child there was the atrocious Ferngully: The Last Rainforest. It was basically the story of a magical rainforest run by fairies being attacked and destroyed by evil industrialists. Turns out there are still rainforests but, sadly (#sarcasm), Kroyer films, the production company that made Ferngully, is no longer with us. Then there was the equally stupid Saturday morning cartoon Captain Planet. The only thing I remember about him (because I refuse to visit that Wikipedia page) is that he was some kind of environmental superhero whose main attribute was a green mullet, oh and Don Cheadle’s (the MCU’s War Machine) hilarious parody version. Overtly political filmmaking is rarely compelling or successful, especially when it’s directed at children.

I’m not saying that Frozen 2 will be the last film Disney makes, far from it, but this is either a pathetic attempt to spin a mainstream family film in a politically correct direction or an unfortunate boot-licking tendency that Disney has developed to try to placate the SJW hordes. Frozen was wonderful for the same reason all great films are delightful, it told a meaningful yet simple story full of a cast of relatable characters. That’s all any story really needs. As long as Frozen 2 does this, no one, from the wokiest blogger to the angriest yellow-vester, will really care about its politics. Francis Ford Coppola’s Godfather films were supposed to be a critique of capitalism but that’s got absolutely nothing to do with how beloved they’ve become. In fact, I’d say the popularity of films like that grows in spite of the politics of the filmmakers. Still, it’s a pretty gross thing to witness what should be a movie everyone can enjoy become mired in stupid political battles. The best stories reach beyond the topical and strike at the profound. That’s what made the first Frozen great and, hopefully, is what will make the sequel great as well, despite all the attempts at politicization.

By John Lee Reed, an American Conservative who specializes in cultural and political commentary.