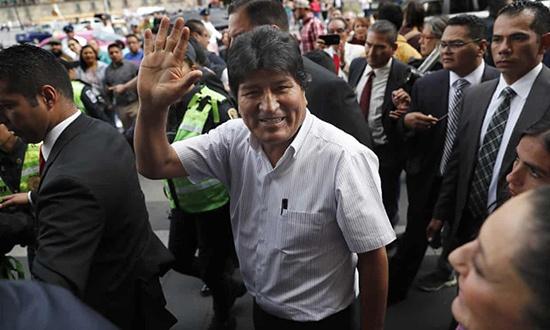 With protests growing in La Paz, the future of the country Evo Morales reshaped is in doubt

On one side of Bolivia’s political chasm people and leaders are denouncing a “coup”. On the other, they are welcoming the “return of democracy”. The dispute over what is happening in Bolivia has spilled far beyond the country’s borders, fought over by allies and critics around the world.

But the most intense battles are playing out on the streets where the crisis began just a few weeks ago, now more volatile than ever, as protesters on both sides say they are fighting for the soul and future of their country.

After weeks of escalating demonstrations over contested election results, which saw police mutiny, trade union allies desert him and then the military call for his departure, President Evo Morales submitted his resignation and fled the country.

But his departure, far from resolving Bolivia’s crisis, has only deepened it. After his allies in the legislature resigned, the next in the line of succession was a rightwing Christian who served as deputy president of the senate, Jeanine Áñez.

She seized the position of interim president with alacrity, naming a new cabinet, declaring “the Bible has re-entered the palace” while brandishing a hefty copy of the book, and warning Morales he could face prosecution if he returned to Bolivia.

Her chief responsibility as temporary leader though is organising new elections within 90 days, and for this she has shown only limited enthusiasm. On Thursday, politicians from Morales’s party and the interim government said they had struck a deal to pave the way for a new vote in 90 days. But on Friday Áñez said that deal had failed, without providing further explanation.

On the streets, protests have continued, with Morales supporters attacking heavy-handed policing, accusing authorities and opponents of targeting them for being indigenous in appearance or dress.

Clashes had resulted in at least five deaths by yesterday. Guadalberto Lara, the director of the Mexico hospital, said most of the dead were in Sacaba, in the centre of the country, and dozens more had been shot and injured. Witnesses said police opened fire on protesters, who were calling for the return of Morales from exile in Mexico.

“It’s very unfortunate,” Lara said, calling it the worst violence he had seen in his 30-year career.

Tensions were inflamed by attacks on the Wiphala, the flag of the native Andean people and one of two national flags in Bolivia. Social media videos showed police cutting it out of their uniforms, and counter-protesters burning it.

“Is this [situation] troubling? Yes, it’s always bad when the military put their thumbs on the scale, but it’s really misleading to call it a coup,” said Jim Shultz, executive director of the Bolivia-based Democracy Center.

“But there’s too much rhetoric from the right wing, speaking as if they’ve been returned to power [in democratic elections]. That is concerning.”

Until very recently, Morales had looked like that rarest of political creatures: a pragmatic and effective idealist. He came to power as part of the “pink tide” of leftwing leaders across Latin America in the last decade, whose coffers were bolstered by a regional commodity boom they pledged to spend on poverty reduction. Bolivia has the continent’s second-largest natural gas reserves.

While allies like Venezuela’s Hugo Chávez frittered away cash on unsustainable projects, Morales managed to turn Latin America’s poorest country into its fastest growing and more than halved extreme poverty.

As the country’s first indigenous president – indeed, the first indigenous head of state anywhere in Latin America – he brought both power and visibility to peoples who make up a majority of the country’s population, but had always been politically and economically marginalised.But one part of indigenous tradition Morales never truly embraced is a rotation of power and it may have cost him his legacy. While he was reshaping his country he refused to groom a successor or contemplate his departure. “He didn’t have any interest in cultivating younger leaders, men or women who would take over that role and carry it forward. It was a key mistake,” said Mark Goodale, lecturer in cultural and social anthropology at the University of Lausanne, who has researched Bolivia extensively.

“If he’d had a graceful transition from power, we’d probably have a new leader [from his Movement for Socialism], and people would be writing about the legacy of Morales. He would be considered like a Nelson Mandela for Latin America.”

There were early hints that he might want to stay in power longer than the two terms allowed by the constitution. In 2009 he told a crowd: “This will be forever.” More recently in 2017 he asked visiting dictator Teodoro Obiang, long-term president of Equatorial Guinea, how he managed to win elections with 90% of the vote.

His political career was forged in the coca-growing unions. Their machiavellian politics prepared him well for the national stage, but may also have steeped him in a leadership tradition of “big man” bosses who stayed in power for decades.

Many of those who took to the streets against him recently were from the indigenous groups that first helped clear his path to power, and were frustrated by what they saw as an illegitimate power grab in the latest elections.

Bolivia’s constitution, drawn up under Morales, sets a two-term limit. His first election victory was discounted from the tally, because it came under the previous constitution, allowing him to run successfully for a third term. Soon after, he tried clearing the way for another run at high office, with a 2016 referendum to abolish presidential term limits.

Morales was still extremely popular. He knew at first hand the poverty that he fought. He had lost four of his six brothers and sisters to malnutrition or disease in childhood, and was working from the age of five, turning his hand to everything from llama-herding and farming to football and trumpet playing.

He is charismatic and respected for the careful stewardship of the economy, the greater social equality he created, and the championing of indigenous rights. But he had also lost supporters over his apparent failure to move on environmental protection and women’s rights, including combating domestic violence and murders of women.

“He passed laws but did nothing to reform the system which perpetuates impunity,” said María Galindo, founder of Mujeres Creando, a feminist movement.

He also appeared to embrace, or at least accept, a growing cult of personality and expensive trappings of leadership – from a museum dedicated to him in his home town, to a new government skyscraper fitted with a helipad and luxury presidential suite.

When voters rejected his proposal in 2016, instead of accepting defeat, Morales brought and won a court case, arguing that term limits violated a “human right” enshrined in the constitution, for Bolivians to run freely for office and choose their leaders. The process cast the first shadow over his legitimacy, and fed suspicions among many Bolivians that he might try to tamper with the next presidential election.

“There had never been a complaint about any of the electoral processes. It was an unprecedented track record of democratic legitimacy, until you get to 2016,” said Goodale.

“As Bolivians it has cost us a lot to get back democracy and we won’t allow any government – be it from the left or the right – to take it away again,” said Fernando Velarde, a 39-year-old university worker.

The greatest controversy stemmed from a near 24-hour-long halt to the vote count, when electricity, internet and the phone supply to election headquarters were cut off. When the count resumed there had been a “drastic and hard-to-explain change in the trend”, handing victory to the incumbent, according to the head of the Organisation of American States election observation team.

The electoral fraud threw Morales’s claim of a first-round win into doubt, and as protests mounted he eventually agreed to call fresh elections.

But it was too little too late. Within days he had fled the country, and what began as a popular rebellion to protect democracy was being denounced as a coup in Bolivia and abroad.

In La Paz and its high-plateau sister city El Alto, hundreds of Morales supporters waved the Wiphala, shouting: “Coup! Come back Evo.” Even some of those critical of Morales and his attempt to stay in power fell in behind him, faced with what they saw as a rightwing power grab.

But the people who have replaced him remain defiant. “The one who said there’s a coup [against him] is in fact the only one who plotted a coup,” said politician Gonzalo Barrientos at the swearing in of the new cabinet.

And that showdown leaves Bolivia and its people vulnerable.

“This is a dangerous moment,” said Shultz. “The country is divided almost in half … and it’s unclear who will mediate, unclear how this gets down to a place of dialogue where we can move forward.”