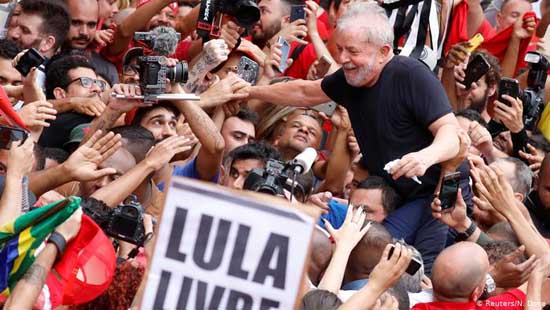 Can Lula lead his country out of crisis? Many hope he will stage a comeback, but such hope is deluded, says DW’s Astrid Prange, who is convinced the country needs a fresh start — without Lula.

The greater the crisis, the more motivated the self-appointed saviors. In Brazil, two old men have promised to lead their country out of the dead end it finds itself in. The men: President Jair Bolsonaro, and former President Luiz Inacio Lula da Silva, who was recently released from prison.

The whole thing is a Brazilian tragedy that has haunted the country since Lula’s successor, Dilma Rousseff, was forced out of office in August 2016. The outlook is bleak: High unemployment, minimal economic growth and a toxic political atmosphere have paralyzed the country.

The question is: How long can the world’s eighth-largest economy continue like this? And can Lula — who many Brazilians greatly admire for implementing welfare programs that lifted more than 30 million people out of poverty between 2003 and 2011 — lead the country out of its current crisis?

The answer: no, unfortunately not — despite Lula’s great services to the country, despite his charisma, his political skills, his popularity and his international reputation.

That is because Lula is also a symbol of the deep divides in Brazilian society. It is a society that is still struggling with the legacy of slavery and a colonial past, and one that has been plagued by ideological tribalism since the military dictatorship of 1964-1985.

Military leaders during the dictatorship swore they would defend Brazil against dangerous communists and socialists. And Brazil’s new president, Jair Bolsonaro, a former paratrooper and a self-proclaimed fan of the military dictatorship, has renewed that fight.

Although Lula’s Workers’ Party (PT) proved that it was, in fact, not a threat during its time in power, it did, like all of the country’s other parties, eventually ensnare itself in scandal. Suddenly, during the course of the massive Lava Jato (car wash) corruption investigation, PT politicians were dragged before the courts.

That means that only an alliance of centrists can lead the country out of the polarized dead end it finds itself in. Hatred of Lula and the PT is not a political program, nor is hatred for the right-wing extremist ramblings of Bolsonaro or the neoliberal reforms of Paulo Guedes, his minister of economy.

For this reason, Brazil’s political class cannot repeat the mistakes it made in 2018. Bolsonaro’s election was a direct result of the inability of centrist parties to agree on a consensus candidate with a realistic chance of winning the vote. And of the PT’s stubborn insistence upon keeping Lula as its candidate despite the clear legal collision course that put them on.

Political polarization since Rousseff’s removal in 2016 has led Brazil into a state of permanent election campaigning. Worse still, it seems as if the country’s poisoned political climate has become a business model in its own right. One that keeps society on tenterhooks and in which political phrasemakers receive more attention than they deserve.

Despite the fact that elections are not scheduled until 2022, many Brazilians have already made their decision — with their feet. Thousands of citizens have already packed their bags or left the country. The wave of emigrants is an indicator of the growing desperation with which many Brazilians view their country’s future. The message is clear: Permanent electioneering does not lead out of permanent crisis. Brazil needs a fresh start — without Bolsonaro, and, unfortunately, without Lula, either.

ELECTION 2020: The Other America