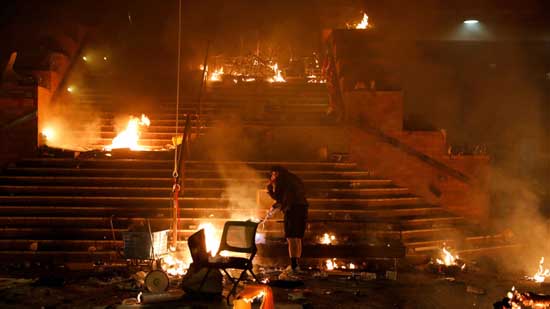 Massive fires raged at the Hong Kong Polytech University campus where anti-government protesters were holed up as they pelted riot police with petrol bombs, and pleaded for the “democratic world” to save them.

The campus turned into a battleground between the rioters hurling Molotov cocktails and rocks, and police deploying tear gas and water cannon, as videos from the scene early Monday morning show an inferno rising near the staircase to the building.

Hundreds of protesters, hiding inside the building, set the entrance on fire, either on purpose or due to ‘mismanagement’ of petrol bombs, when a police raid seemed imminent.

However, after sealing the campus off to prevent ‘reinforcements’ from reaching the area, and detaining a number of protesters, authorities apparently chose not to storm the building.

Hong Kong authorities warned that unless protesters stop using lethal weapons like Molotov cocktails, police might be forced to resort to live fire.

The flare-up comes after a two-day standoff during which protesters threw petrol bombs, stones, and javelins. Some even shot arrows at police.

Over the weekend, protesters attacked a group of volunteers who tried to help authorities clear the roadblocks and debris outside the PolyU. A man and a woman were hospitalized with head injuries as a result.

The PolyU campus became one of the recent rioting hotspots in Hong Kong’s after demonstrations against an extradition law in began in March. Although the legislation was scrapped, protests have continued with violent groups among protesters vandalizing property and attacking citizens who support the government.