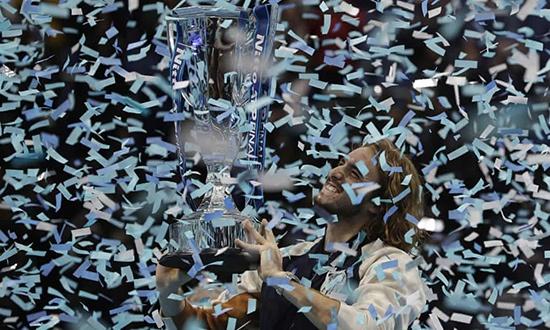 Kevin Mitchell at the O 2 Arena  –  The  Guardian

Stefanos Tsitsipas holds up the trophy as confetti falls after his defeat of Dominic Thiem. Photograph: Kirsty Wigglesworth/AP

Three years ago, Stefanos Tsitsipas arrived in London as a wide-eyed teenager, happy to offer his services as a hitting partner for Dominic Thiem, whom he knew a little. They got to know each other a lot better on Sunday night, spending two hours and 35 minutes together in front of a capacity crowd here as the 21-year-old Greek became the youngest winner of the ATP Tour Finals since 2001.

He looked gone midway through the final set before forcing a second shootout to win 6-7 (6), 6-2, 7-6 (4). “I do not know how I played so well in the second set, breaking him twice,” Tsitsipas said. “It was an excellent set for me. It was frustrating to play with such nerves in the third.

“I’m so relieved by this outstanding performance and fight. My supporters give me so much energy. I just love that. I would like to thank every single one of them with their Greek flags.”

Thiem, clearly spent, said: “It’s a tough moment for me. It was an unbelievable match. Stefanos, we are playing the most brutal sport existing. It was so close. I gave 110%, but that’s how it is. You really deserve it. You are an amazing player. I hope we’re going to have some great finals in the future.”

The quality has sometimes dipped over the years, given the event’s place at the end of the calendar, but this week has provided rich entertainment on nearly every day, as well as a couple of surprises. It was a reasonable expectation that at least one of Roger Federer, Rafael Nadal and Novak Djokovic would contest the title, but they succumbed to the workload and the excellence of their opponents.

Djokovic will almost certainly be back next year but there is no certainty Nadal will get to the line, given his injury problems, nor Federer, who would be 39.

Youth, meanwhile, prospers. Both were full of running and there was little in it until Tsitsipas forced the first break point in the fourth game, after 12 minutes. Thiem did will to hold through deuce.

By reaching the final, the 26-year-old Austrian was already guaranteed fourth place in the world rankings, two places above his friend, but Tsitsipas was not in the mood to hand out cheap favours.

Playing with painkillers for a foot injury that had bothered him most of the week, he looked to be moving without discomfort as he stayed a game in front in the serving cycle at 3-2, the rallies lengthening as the players found rhythm and confidence.

After 20 minutes, Tsitsipas had won 11 of his first 15 service points, while Thiem had to work harder for consistency with ball in hand. Each of them, though, had full trust in their single-handed backhand, a pleasing and rare sight in the game today.

Thiem, who leads Tsitsipas 4-2 in career matches – most recently when coming from behind in Beijing last month – got two break points in the seventh game with beautifully controlled volleys going forward, but his groundstrokes from deep let him down under pressure. Tsitsipas saved 11 of 12 break points against him when beating Federer in straight sets in the semi-final on Saturday and clearly does not lack for self-belief.

Thiem’s backhand faltered at 3-4 to hand Tsitsipas another look on his serve, but again he attacked the net with soft hands to save. A point from safety as he served for the second time to stay in the set, Thiem overcooked a passing backhand for deuce, and needed another deft volley to hold and force the tie-break.

Tsitsipas has the best shootout record on Tour this season, 32-12, but could not quite repair the damage of a slow start. He came from 0-3 down, swapped ends at 2-4 and saved set point for six-all with a lovely volley, his 12th success in 13 visits to the net in the first hour, before Thiem wrapped it up with an unreturnable serve down the middle.

Tsitsipas recovered quickly, breaking and holding to love at the start of the second set. A delightful chip, and delicate lob and a neat volley earned him two more break points and he raced to 3-0 with a running forehand down the line. He was playing at consistently higher level than when beating Federer and Thiem was trapped in the headlights.

He got on the board with a love hold in the fifth game and a less convincing one in the seventh but there was no containing Tsitsipas, who served out the set in 26 minutes, nearly 40 minutes quicker than the first.

As they headed for the decider, Tsitsipas had pulled 12 points clear, with hopes of another breakthrough when he won his 15th net point from 16 for his seventh break point of the match to end an 18-shot rally of the highest quality. He fashioned another quickly but wasted it and Thiem hung on with a couple of solid serves.

His serve came under pressure in the third game, however, and he dumped a backhand to give Tsitsipas his third break of the match. When the Greek held to love for a 3-1 lead, the job looked all but done.

Thiem extended the struggle to near the two-hour mark with his seventh ace and, rejuvenated, he out-hustled Tsitsipas – who botched a simple but crucial volley – to level at three-all.

The fight was back on, but it was Thiem who looked stronger, holding to love to move to within two games of the title. Breathing heavily, Tsitsipas held for four-all. Thiem’s serving arm was grooved and he was belting backhand winners at 90mph. It was a phenomenal sight.

Tsitsipas, moving with less zip, held without reply to keep the championship alive and again to force the second tie-break, the first to decide the title in the 11 years the event has been held in London.

Thiem, who had been two shots from victory in the 12th game, went 1-4 down, as the crowd rose to acclaim “Tsitsipas! Tsitsipas!” before crossing at 2-4 (as his opponent had done in the first set). The match was on Tsitsipas’s racket as he served 5-4 up. Thiem netted a forehand and Tsitsipas forced a final weary forehand from his friend and foe to end a memorable evening.