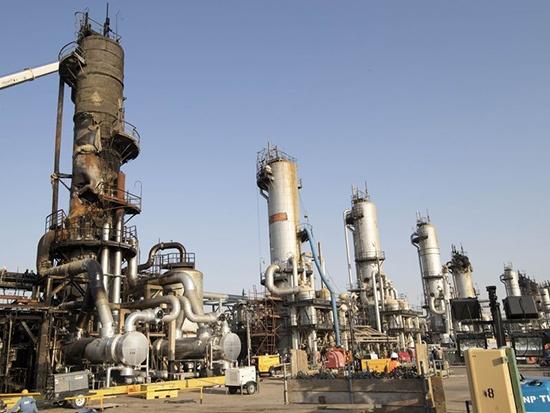 The attack on Saudi Arabia’s biggest oil plant in September added urgency to the kingdom’s push to shore up another key vulnerability: water.

The country’s daily water consumption exceeds its storage capacity, and millions of people could go thirsty if the sprawling desalination plants on which the desert nation depends were put out of action. Saudi authorities plan a building spree of reservoirs to ensure security of supply, as well as to manage periodic surges in demand.

The government will seek bids in the first quarter to install new water tanks at major cities, said Amer Al Rajiba, vice president for capacity planning and analysis at state-run Saudi Water Partnership Co. The plan calls for a six-fold increase in storage capacity by 2022.

Crippling attacks on oil facilities in September hammered home the nation’s vulnerability to potential strikes on other vital infrastructure, like the plants that make drinking water from the sea for most of its population. Saudi Arabia has no permanent rivers or lakes and one of the world’s stingiest rates of rainfall.

Saudi desalination plants are “incredibly vulnerable to an attack like this,” said Seth Jones, director of the Transnational Threats Project at the Center for Strategic and International Studies. The Sept. 14 strikes on oil giant Saudi Aramco’s processing plants at Abqaiq and Khurais temporarily curbed more than half of the state company’s production.

Saudi Arabia’s reliance on desalinated water has concerned policy makers for years. A leaked U.S. diplomatic cable from 2008 warned that residents of the capital Riyadh would need “to evacuate within a week” if the desalination plant at Jubail on the Persian Gulf coast was seriously damaged or destroyed. The Jubail plant ranked second, after Abqaiq, on a U.S. list of critical Saudi infrastructure, according to the cable, which came to light in a WikiLeaks disclosure in 2011.

Jubail supplies most of Riyadh’s water still today, and the plant is set for expansion. All of Riyadh’s drinking water will come from desalination plants by 2030 as part of a national push to conserve aquifers and surface water, according to SWPC.

Saudi Arabia had the third-lowest rainfall rate in the world, according to the United Nations’ Food and Agriculture Organization, and its limited aquifers are emptying fast. Like several of its arid neighbors, the kingdom uses groundwater mostly for farming — including a costly experiment to grow wheat in the desert.

Heightened geopolitical tensions in the Gulf region have intensified concerns over the potential risk to Saudi water supply. By dispersing storage and distribution facilities more widely around the country, the government would make it harder for an adversary to paralyze the entire water system, said Jones of the Washington D.C.-based CSIS. “I hope the attacks in September have encouraged them to do more,” he said.

As the Saudi agency responsible for contracts for the water network, SWPC said it also plans to seek bids for the construction and operation of several desalination plants.

But fortifying such facilities against attack is no easy task. Even if Saudi Arabia shells out for new defenses, it may need 12 to 18 months to train personnel to operate a protective missile system, said Douglas Barrie, a senior fellow for military aerospace at the International Institute for Strategic Studies in London.

“There is no quick fix to the threat,” said Torbjorn Soltvedt, an analyst at Verisk Maplecroft, a businesses and political risk consultant based in Bath, U.K. “In a worst case scenario, where an adversary like Iran sends swarms of drones and large volumes of cruise missiles, it is very difficult to imagine they wouldn’t succeed in what they wanted to do.”