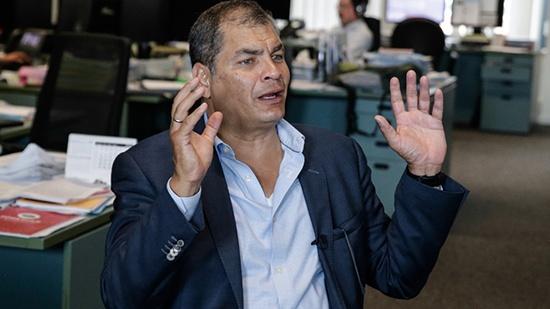 “I am very sorry, I feel bad, because I think the National Telecommunications Corporation has cut off RT’s broadcast because of me,” Correa, who hosts a weekly political talk show on the channel, said.

In this particular case it looks like RT is being censored simply because they offered me a platform for my program.

Correa’s comments come days after Ecuador’s National Telecommunications Corporation (NTC) decided to cease its broadcast of RT Spanish without prior notice or explanation.

The latter has “not yet received any explanation” from the NTC for its decision, Maya Erkova, deputy head of RT’s Distribution Service confirmed on Monday. Curiously enough, last month, Ecuador’s Interior Minister Maria Paula Romo publicly complained about the channel’s coverage of massive anti-Moreno protests, sparked by planned austerity measures, which rocked the Ecuadorian capital of Quito for weeks.

In the midst of chaos, Moreno accused Correa of attempting to “destabilize” the state. Moreno’s critics argue, however, that his quick embracing of neoliberal IMF-approved economic policies, not outside or foreign meddling, are to blame for recent turmoil.

Indeed, since the right-wing Moreno government took the reins, Ecuador has gone from being a global leader in poverty reduction to “another third world IMF basket case,” historian Enrique Rivera wrote for RT last month. A 2017 paper from the Center for Economic and Policy Research (CEPR) found that Ecuador’s poverty rate declined by 38 percent and extreme poverty by 47 percent thanks to a doubling of social spending and government programs aimed at helping the poor under Correa’s leadership.

Correa said the decision to cut RT Spanish reflects that fact that the Moreno government “keeps talking about freedom of speech,” but in reality “applies double standards,” he said.

This is a national broadcaster [NTI]. It belongs to all citizens of Ecuador, and it doesn’t belong to Lenin Moreno.

Correa has also claimed recently that Moreno enjoys a cozy relationship with much of the country’s media, which has been “distorting facts” and covered the anti-government protests selectively.

The RT Spanish team covering the demonstrations were assaulted by police attempting to disperse protesters last month, with camera crew and reporters being pushed and beaten with batons. “Our helmets saved our lives,” RT correspondent Nicolas O’Donovan said at the time.

The current leader of the Latin American country has also overseen a drastic shift in policy on the fate of Australian whistleblower Julian Assange, who was granted political refuge in the Ecuadorian embassy in London for nearly seven years under the Correa government. Assange was arrested inside the embassy in April after Moreno decided to revoke his asylum in a decision Correa called “a crime that humanity will never forget.” Human rights groups as well as renowned journalists and politicians also castigated the move by Moreno.

RT Spanish, which began its broadcast in 2009, is popular across Latin America, with a weekly audience of 21 million viewers and a monthly average of 25 million viewers, the channel says.

US has difficulty achieving ‘willingness’ from allies