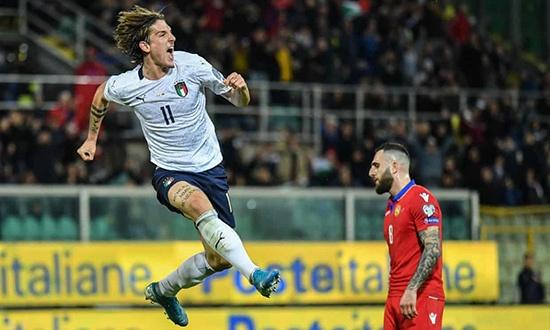 Nicolo Zaniolò celebrates scoring Italy’s second goal on a night when seven different Azzurri players found the net to make it 10 wins out of 10 in Euro 2020 qualifying. Photograph: Andreas Solaro/AFP via Getty Images

Italy produced the biggest win against European opposition in their history when they crushed Armenia 9-1 in Palermo. The Azzurri, who had already qualified for Euro 2020 as winners of Group J, had seven goalscorers with Federico Chiesa claiming their last goal in the 81st minute. Ciro Immobile and Nicolò Zaniolo were the only players to score twice.

Spain enhanced their credentials as one of the favourites for Euro 2020 by beating Romania 5-0 in Madrid. Gerard Moreno scored twice in 10 minutes in the first half at the Wanda Metropolitano, adding to Fabián Ruiz’s opener after only eight minutes.

Romania’s Adrian Rus then scored an own goal in the final minute of the first half. Spain had already won their group and will be seeded next summer, with Romania certain of a Nations League play-off place.

Switzerland won Group D and sealed their place in the finals with a 6-1 win away to Gibraltar. Cedric Itten opened the scoring for the Swiss but they had to wait until the second half before the expected glut of goals arrived.

In other qualifiers Finland, who had already qualified, lost 2-1 in Greece. The winners of Euro 2004 do not even have the consolation of a play-off place.

Sweden, runners-up behind Spain in their group, finished their campaign with a 3-0 win at home against Faroe Islands. Mattias Svanberg, a 20-year-old midfielder with Bologna, scored on his debut.

Meanwhile Norway, who have a Nations League play-off place, won 2-1 in Malta. Bosnia-Herzegovina, also in the play-offs, beat Liechtenstein 3-0.