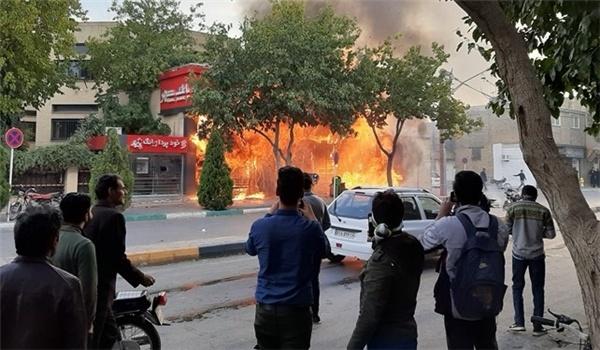 TEHRAN (FNA)- Tens of public buildings and properties, including banks, have been destroyed by rioters in Isfahan province in the past few days of protest rallies against gasoline price hike, provincial officials declared on Monday.

Meantime, an official at the Islamic Revolution Guards Corps (IRGC) announced that the security forces have arrested 150 ringleaders of the recent riots in Alborz province near Tehran.

He added that the detainees have confessed that they had been paid by individuals in and outside the country to damage public properties and launch arson attacks.

In another development on Sunday night, a number of outlaws who had attacked the office and house of Yazd province’s Friday Prayers Leader Ayatollah Nasseri Yazdi with cold weapons were arrested by the security forces.

Riots by a small number who have taken advantage of legitimate public protests against the government’s gas price hike plan in Iran are directed at sowing chaos through targeted attacks on public and private properties, forcing law enforcement to step in to stop saboteurs.

Early estimates of an intelligence body showed that a sum of nearly 87,000 protesters and rioters have taken part in protest rallies and gatherings since Friday night, mostly (over 93%) men. A large number of protesters have only been present in the gathering centers and avoided joining the rioters in sabotage attacks on public and private properties.

“The identical methods of the main core of violent rioters discloses that they are fully trained individuals who have been prepared and looking forward for the situation to rise, unlike most people who have been taken off guard by the sudden hike in gas price,” the report said.

The report shows that gatherings have been comprised of 50 to 1,500 people held in 100 regions of the country out of a number of 1,080 major towns and cities. The report says violent raids and damage inflicted on properties has been larger than what happened in February 2018 unrests.

Most cases of damage to properties has happened in Khuzestan, Tehran, Fars and Kerman provinces. The report says most casualties have resulted from armed outlaws’ attacks on oil storage and military centers, adding that a number of police and popular forces have been martyred in these attacks.

Nearly 1,000 people have been arrested across the country while over 100 banks and 57 big stores have been set on fire or plundered in just one province.

The Iranian intelligence ministry announced in a statement on Sunday that it had identified several rioters who misused the recent protest rallies against the gasoline price hikes to destroy public and private properties.

“The main culprits behind the riots in the past two days have been identified and proper measures are being adopted and the honorable nation will be informed about its result later,” the statement said.