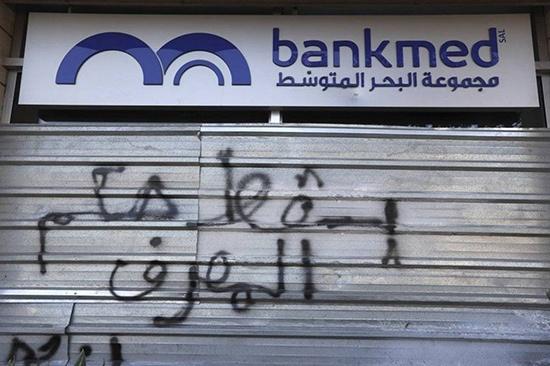 While the size of Lebanese debt is formidable, it is almost all internal and circular, and can (and should) be resolved over a weekend of tough, candid conversations.

Lebanese Eurobonds are trading at yields-to-maturity touching 80%, and these are the ones due in April 2020. Credit Default Swap levels have hit 5000 bps, up from the already ludicrous 1,500 level only a few weeks ago.

Clearly, market participants have priced in a default, with metaphysical certitude, on all bonds maturing after the ones supposed to pay off this month. Even Lebanese government officials have stated (then recanted) on multiple occasions that they will restructure, reschedule, postpone, and other euphemistic terms that confirm this view.

According to the journalist who first broke the rescheduling statement in a local paper, the minister who announced it was reading from a document, i.e. while not inevitable, this is most certainly an option being seriously considered at the highest echelons of government. So, if the smartest people in the room, as well as the insiders, are telling you that they’ll default, should we end this article right here and move on to look at the safer Venezuelan or Argentinian Bonds for our distressed debt play?

Let’s look at the numbers. The eurobonds outstanding are $29.8 billion. We know that $16 billion are held by Lebanese banks and another $3 billion by the Central Bank of Lebanon (BDL), and an estimated $600 million by individuals. According to Bloomberg, which is not necessarily comprehensive, around $5 billion are held by foreigners. That leaves $5-6 billion with unknown ownership, but, at the very least, 67-84% are owned locally. The total Lebanese debt number that keeps being thrown around is $86 billion. Thus, at worst, 5-11% is held by foreigners.

However, if we add the debt held by the central bank, namely bank deposits lent to the central bank, which is now $110 billion (60% of which is in dollars, i.e. more than the eurobonds), that makes Lebanese government debt in the order of up to $180 billion, depending on how you calculate the recoverability value of some assets. So, basically, the eurobonds held by foreigners constitute something like 3-6% of all government debt.

Why am I making a big deal about debt by foreigners? Think of a credit card with a $10,000 limit. Suppose you charge $1,000 on it and you determine that you can’t pay and decide to default. Would you default on the $1,000 or would you run up the card to the whole ten grand, after one last boondoggle in Las Vegas the weekend before you default?

While the size of Lebanese debt is formidable, it is almost all internal and circular, and can (and should) be resolved over a weekend of tough, candid conversations.

So the bonds owned locally could all be paid through the usual financial engineering acrobatics. Payment goes from central bank, to Euroclear, to local bank, and right back to BDL, all solved à la Libanaise, while we do our internal “family” restructuring that nobody outside the country has to know about.

Once you consider the face value of the bonds, the case gets even more compelling. At current market values, BDL can buy the whole lot for a significant discount. If we dispatch our favorite verbally-challenged, conversationally accident-prone minister to a packed press conference, BDL can buy the whole lot for even less, while the ministry’s communications department issues their usual clarifications — “I meant restructuring … no rescheduling … no postponement. No, I meant everything will be paid on time.”

The case for restructuring the whole system is self-evident — haircuts on deposits, devaluation, forced conversions, etc. So, why am I more bullish on the eurobonds? It’s quite simple, actually. If I were a decision-maker in the Government of Lebanon, why would I wreck my sovereign FICO 800-score, a record of never having defaulted on debt since the country’s independence, all for 5% of my debt?

It’s not because I’m a nice guy — it’s actually quite cynical and pragmatic. After the carnage is done, with the brutal local restructuring, I’d like to go back to the international markets at reasonable rates and use my intact credit record, to attract funds during the rebuilding phase.

Too wimpy to take a naked position? How about hedging your long position with a short on the bonds paying in two weeks? Who in their right mind would be preparing to default in April, right after paying $2 billion in November?

The risk in this trade is that my analysis assumes the existence of the infamous “rational man” (ubiquitous in Economics texts), which is even more “unicornal” in the history of Lebanese Government decision-making.

This is not a trade for the faint-hearted. It is the quintessential contrarian trade — this decade’s tinier version of John Paulson’s shorting subprime in 2008. It’s designed for a ballsy distressed debt hedge fund, taking a majority position (to get voting control). And the doozy on the whole thing? BDL’s gold is held in New York, all ripe for a lawsuit in case any public official wants to turn a slip of the tongue into action.