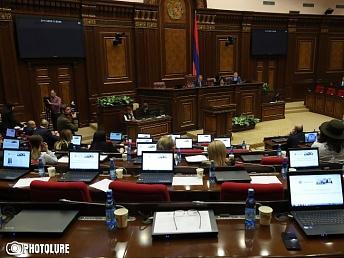 YEREVAN, November 19. /ARKA/. Armenia’s National Assembly considered today the nomination of candidates for the Commission on the Prevention of Corruption, named by the government, the ruling bloc My Step, the opposition Prosperous Armenia and Bright Armenia factions, as well as the Supreme Judicial Council.

The government’s nominee Lilit Aleksanyan said she would not reveal a secret if said that public discontent would continue if the methods and tools of the fight against corruption were ineffective and temporary.

As a solution to the problem, she proposed the introduction of an automated system for assessing corruption risks, which, for example, based on the analysis of the submitted declarations, will identify the most “risky” officials. Aleksanyan also proposed introducing a mechanism for declaring gifts and invitations to events.

Edgar Shatiryan, a candidate from My Step faction, suggested expanding the list of persons obliged to submit declarations, and also noted that the content of the declarations submitted now does not prevent illegal enrichment.

The candidates nominated by the Prosperous Armenia and the Bright Armenia factions Narek Hambartsumyan and Haykuhi Harutyunyan also expressed their commitment to the fight against corruption.

The Supreme Judicial Council’s nominee Aramais Pashinyan downplayed rumors that he is a relative of Prime Minister Nikol Pashinyan or the latter’s nephew, MP Sipan Pashinyan.

“I never met with the Prime Minister and MP Sipan Pashinyan. I didn’t even communicate with them indirectly. I don’t have any kindred ties. At least I am not aware of any,” the candidate said. The result of the voting will be announced later.