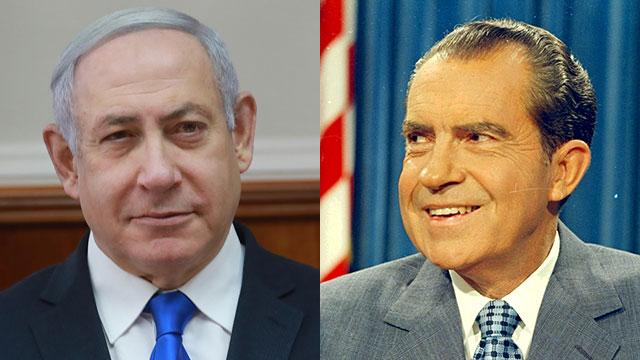 Opinion: Both were strong-headed, ambitious and stubborn veteran politicians, but both found themselves embroiled in political scandals; is Netanyahu also about to make a deal to cut and run hoping to rehabilitate his image in the future?

The 38-year-old Nixon, then a senator for California, was a rising star in American politics, making a name for himself as a staunch anti-communist.

On the night of his nomination for potential vice president, the New York Post published an article accusing Nixon of embezzling campaign funds for his personal use.

Eisenhower demanded that his running mate appear in a campaign message to convince the public to the contrary.

Nixon made good on the request and explained the accusations in what came to be known as the “Checkers speech,” improving his relations with the presidential hopeful in the process.

“Why do I feel so deeply? Why do I feel that in spite of the smears, the misunderstandings, the necessity for a man to come up here and bare his soul as I have? Why is it necessary for me to continue this fight? And I want to tell you why. Because, you see, I love my country. And I think my country is in danger,” said Nixon.

Eisenhower’s response was candid praise for what he said was Nixon’s courage.

Nixon served for eight years as vice president, proving during that time and later in his career that determination and persistence are the key ingredients for a politician’s rise to the top.

It is not clear if these characteristics are of an intellectual or hormonal nature. Either way, without them politicians find it hard to last.

In 1960, Nixon ran against John F. Kennedy for the presidency. Though he only lost by a mere 100,000 votes, Nixon’s road to the White House seemed blocked forever.

There was never American historical precedence of a vice president running for the presidency a second time.

Nixon, determined to return to politics, decided in 1962 to run for governor of California – but also lost in that race.

In a press conference following his loss, Nixon retired from politics.

“You don’t have Nixon to kick around any more, because, gentlemen, this is my last press conference,” he said.

But Nixon was not a quitter and his need for power was stronger than him.

In 1968 he reran for the presidency on the Republican ticket and won, being reelected in 1972 for second term by a wide margin.

But then Watergate happened.

In 1972, several people were caught by police while installing wiretap devices in the Democratic National Committee at the Watergate hotel in Washington, D.C., leading to a Washington Post expose that linked the break-in to Nixon’s senior aides.

Nixon fired the suspected aides and denied any connection to the scandal, but then-Attorney General Elliot Richardson turned on him after he refused to carry out Nixon’s order to fire the chief prosecutor.

He went on to testify against the president before the House Judiciary Committee, leading to the impeachment process against Nixon.

Nixon continued to claim in media appearances he had nothing to do with Watergate, voicing the famous saying “I am not a crook.”

He agreed to resign his presidency in 1974, his VP Gerald Ford replacing him and issuing a presidential pardon for any prosecution.

There several similarities between Richard Nixon and Benjamin Netanyahu, from their will to rule to their no-holds-barred survival mentality.

In 1993 Netanyahu ran for the leadership of the Likud party when the so-called “hot tape” became public.

An anonymous caller phoned his wife Sara, demanding Netanyahu give up his nomination or the tape allegedly containing evidence of Netanyahu’s affair with another woman would be released.

Netanyahu appeared on TV, admitting guilt but claiming the tape was an extortion attempt by a “senior official in Likud.”

While many others would have kept quiet, Netanyahu didn’t give up. He made the whole scandal irrelevant and won the nomination for the leadership of Likud, and eventually the premiership in 1996.

He suffered a second blow in 1999 when he lost the elections to then-Labor leader Ehud Barak and resigned from the leadership of the party.

At a press conference following his resignation, it seemed Netanyahu was retiring from politics, telling the media: “Sara, come on, we’re going home.”

Netanyahu’s need to regain power was far stronger than him, and he was willing to endure several setbacks in order to get there.

Returning to Likud under Ariel Sharon (to whom he lost the 2002 party primaries) and agreeing to serve as the finance minister, all in order to stay in the loop.

In 2006, he again ran for the premiership and lost to Ehud Olmert and the Kadima party, with Likud falling to an all-time low 12 seats in the Knesset.

But Netanyahu has never been a quitter.

In 2009 he ran again for the premiership and managed to form a government, despite his party having fewer seats than Tzipi Livni under Kadima.

In both of the election cycles so far in 2019, he was not able to form a government, while Attorney General Avichai Mandelblit was deciding whether to indict him in three separate corruption cases.

Does he believe he will manage to escape the attorney general’s decision to indict him, which is expected to be made this week. Or does he, like Nixon, believe his insistence on remaining in power will help him secure a better plea deal in order to save the country from the current political whirlwind?

It’s hard to say, but perhaps Netanyahu can see some comfort in Nixon’s life following his resignation of the presidency.

He transformed into an important political analyst in the U.S. and a respected diplomat who met with leaders from all over the world.

In fact, the ’80s, Nixon was even chosen in a Gallup poll as “one of the most admired people in the world.”