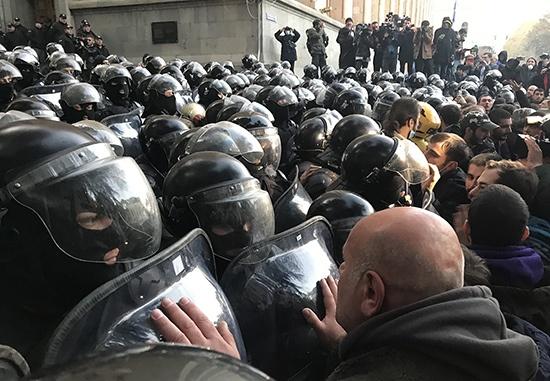 Thousands of protesters attempted to shut down parliament after the government promised and then reneged on electoral reform. Police removed the demonstrators, but the political crisis seems far from finished.

Riot police forcibly removed protesters from around the Georgian parliament building on November 18 as the crisis deepened over a broken promise from the government to reform the country’s electoral system. Opposition parties have demanded snap elections under a new system that wouldn’t give a leg up to the ruling party, as the current one does.

Police used water cannons and tear gas to evict the protesters who had been camping for several days outside parliament. Earlier in the day, opposition activists had sealed the Georgian parliament’s gates with padlocks and chains and stood vigil at the entrances so that members couldn’t get in. Parliamentary committee meetings failed to convene as picketers prevented lawmakers from the governing Georgian Dream from entering the assembly. Reuters estimated the protestors numbered 20,000 over the weekend.

“By blocking [the parliament], we hope to show to the public, and to [Georgian Dream Chairman Bidzina] Ivanishvili first of all, that there is no more business as usual,” Zurab Tchiaberashvili, a member of parliament from the European Georgia party who was manning one of the entrances, told Eurasianet. “The government has to understand that they have passed the point of no return when they can continue governing the country like before.”

Police issued warnings, telling protesters to unblock entries to the parliament. “In case of attempts to storm government buildings or continued blockade, police will react according to law,” police said in a statement.

As dusk fell they did react, with hundreds of armored officers using their riot shields to muscle the protesters away from the parliament building. Many of the protesters resisted, and others shouted abuse at the officers, but there were no apparent uses of excessive force. In less than an hour all demonstrators were forced to the nearby streets where they continued to protest.

The protests broke out last week as the government walked back its promise to amend the country’s election code. On November 14, the ruling Georgian Dream party rejected its own bill intended to level the electoral field and provide a more equitable representation in parliament. Following the protests, Georgian Dream officials dug in their heels and said they were through debating electoral reforms and that next year’s parliamentary vote would be conducted under the current system.

“We call upon our opponents to start preparing for the elections and stop blaming the lack of public supporting on the election system,” said Tbilisi Mayor Kakha Kaladze, the general secretary of Georgian Dream, adding that its patience with protesters will not last forever. “If the destructive campaign continues, the government will take the appropriate measures.”

Opposition parties remained unfazed by the warnings. “We will continue to stand here,” Tchiaberashvili said before the blockade was dispersed.

Ivanishvili, the country’s behind-the-scenes ruler, offered himself this summer to change the election system. That promise now appears to have been a trick to defuse those protests, and the failure to pass the reform bill a poorly staged effort to mask that ruse.

Georgia currently has an electoral system mixing proportional and majoritarian elements in elections for its 150-seat legislative assembly. Voters check on the ballot the name of an individual representative running in their district and also the name of their preferred political party. Individual representatives take 73 seats in the assembly, while the other 77 are distributed among parties based on a proportion of national vote. That has allowed Georgian Dream to amass a dominant majority in parliament out of proportion with its electoral popularity. The rejected bill would have switched Georgia to an entirely proportional system, which would distribute the seats more equitably.