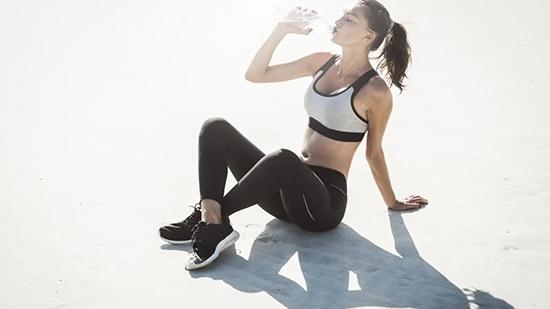 The best part about exercise is getting to the end.

You thought you might never get there, because you’d most definitely just stepped into an alternate universe where 45 minutes stretches to three days. But you made it, like the kick-arse – albeit sweaty and sore – human you know yourself to truly be.

Endorphins are pouring through you and, damn, you are feeling great. So great, that you need a reward. Of the boozy variety.

So you dash to the pub with your mates for a cold beer, maybe a G&T, or an Aperol spritz.

It tastes delightful. And yet, it seems utterly incongruous with the hard work you’ve just put in, if not just plain silly.

The human body treats alcohol as a toxin, and in the rush to be rid of it, muscle-building and fat-burning may be put on hold.

According to the Australian Institute of Sport’s chief of nutrition strategy, Professor Louise Burke, alcohol after exercise certainly won’t have a positive effect, aside from perhaps giving you some fluid.

The problem, she says, is that the human body treats alcohol as a toxin, and in the rush to be rid of it, muscle-building and fat-burning may be put on hold.

“Because our bodies consider alcohol to be a toxin, we need to process it as quickly as possible and so it will take over metabolism in that period and may interfere with other processes you might like to have happened post-exercise,” she says.

Those processes include protein synthesis, which is how your muscles recover and grow.

One 2014 study, published in PLOS One, found that consuming alcohol after a tough workout – even if with a protein shake – negatively impacted the body’s repair process and adaptation to training.

The other process that may be affected is burning fat.

“The change in metabolism that occurs when you have alcohol in your system means you’re temporarily storing fat rather than processing it,” Professor Burke says. “It tends to be stored around your abdomen.”

Also, alcohol is a diuretic, which means it can promote dehydration – not ideal when we should be replacing fluids following a sweat session.

Professor Burke says this is more of a concern if your favourite drink has higher concentrations of alcohol.

One study found that when people consumed drinks containing 4 per cent alcohol after exercise, their urination increased and rate of recovery lowered.

Professor Burke says the cognitive effects of alcohol are another concern, as getting sauced can, of course, lead to poor decisions. For example, she warns you might make bad food choices over properly refuelling.

“The thing with alcohol is it lowers our awareness of what’s going on and our ability to stick to a plan so sometimes we end up doing behaviour that’s counter to our goals because it distracted us from the better course of action.”

If you burn calories in the gym and then go to the pub, have three drinks (and) a burger … you’ve blown your calorie budget for the day.

“If you burn calories in the gym and then you go to the pub, have three drinks, then you get into the peanuts and have a burger on the way home, suddenly you’ve blown your calorie budget for the day.”

But she stresses that one beer after a jog isn’t going to send your health goals hurtling backwards. She is more concerned about excessive drinking.

Exercise physiologist Jace Kelly agrees. “If you’re going out after the gym to have two wines with friends over dinner on a Friday night, you’re probably not going to be too negatively impacted,” he says. “But a Friday night binge will certainly impact your body’s ability to recover.”

It’s usually recommended that people refuel within about 45 minutes of exercising, unless they had a pre-workout feed.

Mr Kelly says for most people, about an hour between finishing their workout and their first wine is a good minimum to aim for.

Mr Kelly advises people consider what state they are in prior to exercise (i.e. are they stressed, unfed, dehydrated) and how intense their workout is when deciding how much time to spend refuelling their bodies afterwards, before consuming alcohol.

After a high intensity session like F45 Training, he says “that’s definitely going to require a lot more attention to replenish energy stores and proteins”.

But if you do a 15-minute session on a spin bike? “You’re not going to need to refuel for an hour.”

For most people, about an hour between finishing their workout and their first wine is a good minimum to aim for.

Rather than setting a strict time rule, Professor Burke’s advice is to ensure you tick off whatever it is you need to get done before thinking about grog – that could be having a protein shake, rehydrating, stretching.

“That does two things for you: it looks after your priorities and it slows down the process where you will make a decision about having alcohol,” she says.

“If you’re sitting down and having a meal that’s well chosen, you’ll drink at a more reasonable pace.”

The ideal post-workout feed will depend on what activity you do. Professor Burke says many types of exercise, including circuit work or resistance training, will require a protein source to aid muscle recovery.

Others may also require carbohydrates – particularly if you’re running or swimming – to replace glycogen stores or water and electrolytes to replace fluids lost through sweat.

“In some cases you can get a better return for what you’ve put in by the way you treat the post-exercise period,” Professor Burke says.

Sophie is a homepage editor, digital journalist and producer for The Age.