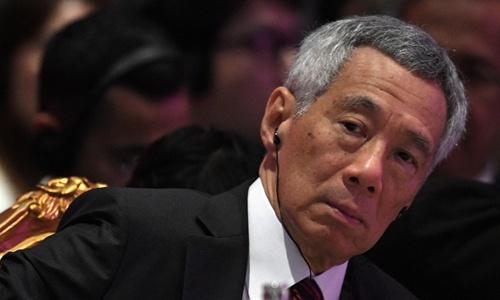 Singaporean leaders tend to be blunt when it comes to Chinese affairs. The ongoing turmoil in Hong Kong is no exception. Political and business leaders from Singapore, including Prime Minister Lee Hsien Loong and his wife Ho Ching, who is also the chief executive officer of Temasek Holdings, have talked about the situation on different occasions. Their statements have attracted widespread attention both at home and abroad. Why are Singaporean leaders outspoken on Hong Kong affairs?

To answer the question, we should start from what they have talked about.

During an interview with CNN on October 6, Lee said issues within Hong Kong like housing are quite fundamental “and these are not radically addressed.” Speaking at an event organized by the Japanese Chamber of Commerce and Industry in Singapore on October 10, Lee noted many domestic issues in Hong Kong are behind the unrest, including housing, jobs, medical care and education. He said that the current riots in Hong Kong are a bad thing for Singapore, adding it is “much better for us that Hong Kong [remains] prosperous and stable.”

At Singaporean NTUC (National Trades Union Congress) National Delegates’ Conference on October 15, 2019, Lee said, “If it [riots in Hong Kong] happens to us… It would become impossible to govern Singapore, to make and carry out difficult decisions, or to plan for the long-term good of the nation… Confidence in Singapore would be destroyed. I think Singapore would be finished.” Speaking at Forbes Global CEO Conference the next day, he said, “The demonstrators, they say there are five major demands, and not one can be compromised. But those are not demands which are meant to be a program to solve Hong Kong’s problems. Those are demands which are intended to humiliate and bring down the government.” During the East Asia Summit held recently in Thai capital Bangkok, he reiterated that solutions to the Hong Kong issue have to be found within the “one country, two systems” principle “because Hong Kong is ultimately part of China.”

From Lee’s statements, it can be inferred that he has been focusing on three aspects of the situation in Hong Kong – why did the turmoil happen; how it can be resolved; what is the significance or impact it has on Singapore.

According to the city state’s leaders, escalating riots in Hong Kong are alarming for Singapore.

People often compare Hong Kong with Singapore. It means the two have many similarities. They are both Asia’s four little dragons. Singapore’s GDP was around $364,156 million in 2018, with a growth rate of 3.1 percent. Hong Kong’s GDP in 2018 was $362,992 million with a 3 percent growth rate. Both are also crucial financial centers in the Asia-Pacific region.

Moreover, the two are both export-oriented economies. Either internal or external turmoil would be damaging to the economic development and social progress of the two places. That’s why Lee mentioned Singapore is vulnerable if what happens in Hong Kong takes place in Singapore.

As Lawrence Lau Juen-yee, a Hong Kong economist, wrote that the protests in Hong Kong will profoundly affect the city’s status as an international financial center. The riots will without doubt lead to the outflow of capital, talents and wealth and one of their primary destinations is Singapore, another financial center in the region.

It is common sense that no investor would put him/herself in a dangerous place. It is reasonable to believe that the situation in Hong Kong will cause the outflow of capital, talent and wealth. But the riots’ destructive impact on the city, China and the region can hardly be ignored by Singapore. Foreign investors’ pessimism would severely affect the confidence of countries in the region – triggering concern over economic development. After all, Asia-Pacific region is where Singapore is located and where it can find partners for common prosperity.

The author is a research fellow with the Charhar Institute and the College of ASEAN Studies at Guangxi University for Nationalities. [email protected]
Newspaper headline: Why HK violence concerns Singapore