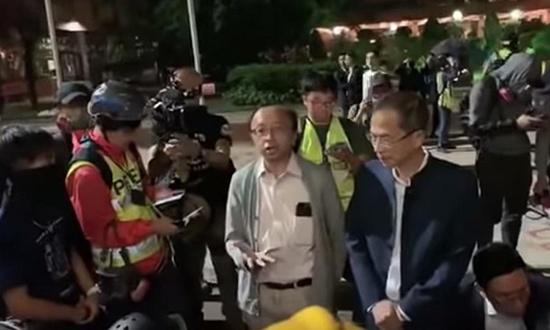 Hundreds of young protesters left the Hong Kong Polytechnic University (PolyU) as a politician and a law professor guaranteed that they wouldn’t be physically harmed if arrested. By Tuesday evening a credible estimate was that around 100 hard-core protesters remained inside.

On Monday evening, Jasper Tsang Yok-sing, former Legislative Council president, and Eric Cheung Tat-ming, principal lecturer and director of clinical legal education at the Department of Law at the University of Hong Kong, entered PolyU to persuade the students to leave the campus, which had been surrounded by the police from Sunday evening.

Tsang said the police would record the personal information of the underage people and take pictures of them before letting them go home. He said he could guarantee that the adults would not be physically hurt during the arrest outside the campus.

The involvement of Tsang could be seen as a hopeful sign for the larger situation outside the PolyU campus, as he is a veteran politician of the pro-Beijing political camp who managed to impress both sides as an impartial president of the legislature between 2008 and 2016.

Tsang is the founding member of the largest pro-Beijing party, the Democratic Alliance for the Betterment and Progress of Hong Kong (DAB), and is regarded as being a trusted Beijing adviser.

Some who have read a recent interview he gave see in him the sort of flexibility and fresh thinking that might help to resolve what had come to be seen as a virtually irresolvable standoff between pro-government forces and protesters.

It is obvious that the DAB leader’s action to help resolve the tense situation at PolyU and more broadly in the city would not have occurred without coordination with the Lam government and, indeed, with Beijing’s point man on Hong Kong, Deputy Premier and Politburo Standing Committee member Han Zheng, who reportedly spent the past weekend in Shenzhen.

To put it another way, Jasper Tsang walking into the university amounts to Beijing walking in and offering an olive branch. But whether the Tsang intervention can become the beginning of crisis resolution dialogue is, of course, an open question.

Meanwhile, police maintained their siege at PolyU and there were wildly differing accounts of who and how many students and non-student protesters had departed voluntarily or otherwise or remained inside, and for what reasons.

Cheung said as of 7pm, more than 500 people had decided to leave while 200 were under 18 year olds. He said he believed that it would be difficult for the police to charge these people, who only stayed in PolyU and were not seen to have participated in any illegal activity, such as throwing petrol bombs. He said such lenience was necessary because a lot of people in the public wanted to prevent a large-scale massacre or bloodshed.

Derek Liu Kin-kwan, president of the university’s student union, said on Tuesday morning that there were still 200 to 300 people staying in the campus. Liu insisted that those who stayed in the campus only wanted to safeguard the university. He added that some of these people were willing to leave the campus if they would not be charged for “rioting.”

Liu said Monday that there were about 500-600 people in the campus while about 60-70% of these people were PolyU students.

Ip Kin-yuen, a Legco member representing the functional Education constituency and the chief executive of the Hong Kong Professional Teachers’ Union, together with more than 50 secondary school principals, also entered the campus. Ip said those who decided to stay had lost trust in the police. Some principals said they spent hours trying to persuade their students to leave.

At 5pm, Hui Chi-fung, a Democratic Party lawmaker, walked out with a dozen of students from the campus freely.

Chief Executive Carrie Lam on Tuesday morning said she strongly hoped to end the situation in PolyU peacefully. She said about 600 people, including 200 underage people, had left the campus while more than a hundred people stayed.

Lam said the government had provided medical treatment to those who were injured or felt sick in PolyU and had allowed underage people to go home without immediate arrest. She said the police reserved the right to take follow-up actions.

She said she hoped the remaining hundred “rioters” could surrender.

On Monday, people had tried to escape from the campus three times. At 8:30am, about a hundred protesters walked out from PolyU and arrived at Chatham Road South, HK01.com reported. Police fired tear gas canisters and rubber bullets at them, forcing many of the protesters to retreat back to the campus. About 50 protesters were arrested in Tsim Sha Tsui East at 9am; many of them were beaten up with their heads bleeding.

During their third escape at 1:30pm, some people were injured by police while many were arrested, StandNews reported. Some retreated back to the campus. At 2pm, police allowed 14 members from the Hong Kong Red Cross to provide medical treatment to the injured. In the afternoon, at least 70 people were sent to hospital, mostly suffering from hypothermia.

In the evening, about one hundred people successfully escaped by climbing down with a rope from a bridge. When police found out that someone were escaping, they fired tear gas and arrested some people while most left by motorbikes.

On Monday afternoon, thousands of people blocked key roads in Tsim Sha Tsui. They had clashes with the police on Chatham Road South. From 6pm, more people arrived Tsim Sha Tsui, Jordan and Hung Him, calling for the release of the students and protesters in PolyU.

Between 8 and 9pm, thousands of people gathered on Salisbury Road while tens of thousands of people showed up on Nathan Road. As the MTR stations in Tsim Sha Tsui, Jordan and Yau Ma Tei were closed, protesters formed a long human chain to pass necessities from Mong Kok to Jordan.

Major clashes happened on Nathan Road in Jordan as police fired many rounds of tear gas and rubber bullets at protesters, who resisted by throwing hundreds of petrol bombs. Protesters were in a defense mode and did not charge forward. Between 9 and 10pm, the police subdued and arrested dozens of protesters in the district. The arrested included some white-collar workers and local residents.

Late night clashes also occurred at the intersection of Austin and Cox’s Roads in a usually quiet neighborhood. Several hundred black clad “raptor” protesters were quickly dispersed by Special Tactical police, rounded up in a children’s playground and arrested.

Three police vehicles ploughed into a crowd of protesters in Yau Ma Tei, causing a stampede. At least 60 people were arrested. Police on Tuesday denied that it was dangerous driving.

Clashes were seen on Chatham Road South and Salisbury Road. Police dispersed the crowds and arrested well over 100 people.

The crowd dug out bricks from the pedestrian sidewalks and threw them onto the roads. Bamboo sticks and debris were also used to block the roads. On Nathan Road in Tsim Sha Road, a traveler bus was set on fire. Firefighters came to put it out.

At midnight, some protesters went home while some others continued to gather in Mong Kok and Yau Ma Tei. More clashes happened in the district. A crowd of a hundred or so people who were firebombing on Jordan Road was dispersed, with some members arrested, around 3am.

With police custody their best option, some inside PolyU were determined to fight on.

“Even if we surrender they will still put us to jail. It seems we have two options, but actually we only have one … which is jail,” one of the protesters, a mechanical engineering student who gave his name as Matthew, told AFP inside the campus.

The new phase of mass disruption, which began last week, has caused chaos throughout the international financial hub, with schools closed, train lines disrupted and major roads blocked by barricades.

With the crisis deepening, China’s ambassador to Britain upped the ante on Monday.

“If the situation becomes uncontrollable, the central government would certainly not sit on our hands and watch,” Liu Xiaoming said. “We have enough resolution and power to end the unrest.”

In another signal, China insisted Tuesday it had sole authority to rule on constitutional matters in Hong Kong, which it rules under a special model giving the city greater freedoms than enjoyed on the mainland.

The warning came as it condemned a decision by the city’s high court on Monday to overturn a ban on face masks worn by pro-democracy protesters.

“No other institution has the right to make judgements or decisions,” he said.

A mainland scholar who requested anonymity to speak freely about such a sensitive subject said while the parliament had the right to take away what it gave, the timing of the announcement was ill-advised.

“Such a statement would gravely affect people’s views on the principle of ‘One Country, Two Systems.’”

Carrie Lam has repeatedly insisted that her unpopular police force can contain the unrest, and said Tuesday there was currently no need for the People’s Liberation Army to intervene.

– With additional reporting by AFP