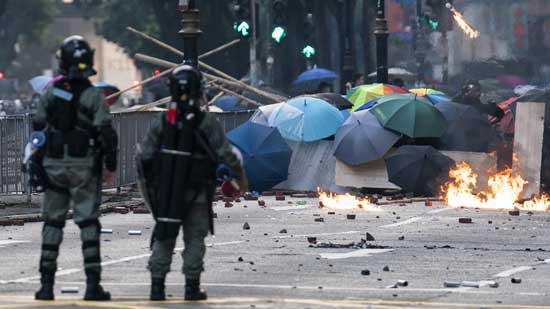 George Galloway was a member of the British Parliament for nearly 30 years. He presents TV and radio shows (including on RT). He is a film-maker, writer and a renowned orator.

In my experience of the regime change operations in East and Central Europe in the early 1990s, the creation of zones described as “democracy” or “anti-communist zones” by the insurgents was usually the beginning of the end game.

Normally the zones would be in the center of the capital cities, handy for the foreign news crews and heavily composed of English speakers wearing “velvet gloves”.

The prototype most remembered was in Prague, the anniversary of which fell at the weekend.

The only reverse I saw was in Bucharest.

Arriving there before the bodies of Nicolae and Elena Ceaușescu were quite cold, to write my book “Downfall”published by Futura, I followed the rubric “keep checking the square”. Whatever happened next I figured would happen in “the square”.

Although the red royal family had been deposed and were dead, the mob wanted more blood, namely that of democratic Romania’s first president Illyescu and prime minister Petre Roman.

“All the communists and Jews must be hanged” one “democracy” protester told me in the square one night. It was the first time I had personally encountered the phenomenon of “anti-Semitism without Jews”. Later, I would spend Shabat with Romania’s Chief Rabbi – who’s flock had long left the country – who would tell me how much more he feared Romanian “democracy” than the communists.

Anyway, late one night before retiring I went out to check the square.

There I found the Romanian masses – the coal-miners – their helmets shining from their pit-lamps, roughly clearing the square of those who’d just torched the parliament. It turned out that the English-speakers in not so velvet gloves didn’t quite speak for all Romanians.

I saw the same thing this week when the Chinese army finally moved en masse into the torched streets of Hong Kong. And the welcome they received from the non-CNN classes when they did.

Their mission -to clean up the once golden city-state – was surely supported by all right-thinking people in the territory the breaking point for whom was surely the turn in the protesters’ tactics from burning public buildings to burning the public itself.

Together with the surrender of the hold-outs amongst the rioters who’d commandeered the Polytechnic, it marks a significant turning point in what had become an existential challenge to Chinese rule in Hong Kong.

My own rule of thumb would be that when protest moves from the fluid and temporary to the static and permanent, it ceases to be a protest and becomes a challenge for power. And no regime on earth still capable of resisting can possibly tolerate that for long.

A protest has demands capable of negotiation and even concession. A challenge for power has “transitional demands”, ie demands which if conceded would represent the surrender of power to the challenger. China could not be expected to surrender and therefore its challengers must be made to do so.

I argued here last week that though all power in the end comes out of the barrel of a gun, in this case China had no need of guns. Just men.

Men to fill every street and public space in Hong Kong and to deny that space to the western-sponsored challengers for power. Finally, after presumably long deliberation and certainly a great deal of patience or inaction, the Chinese state has begun to move decisively. There will be no “democracy” zones in Hong Kong, and certainly no “anti-communist” zones either. Soon it will no longer be necessary to keep on checking the square.