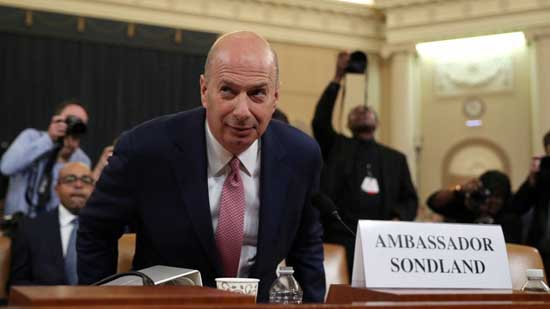 House Democrats tried repeatedly to goad their diplomatic witness into “admitting” the elusive quid pro quo of aid withheld pending a probe, but the best they could get was confirmation he told Trump “Zelensky loves your ass.”

US Ambassador to the EU Gordon Sondland played the ‘can’t recall exactly’ card as Intelligence Committee Chair Adam Schiff and Democratic Counsel Daniel Goldman pushed him to confirm President Donald Trump had made the release of foreign aid to Ukraine contingent upon President Volodymyr Zelensky’s launch of a corruption investigation. Sondland did say he believed that there was a quid pro quo in his prepared remarks, but in his later testimony he was hazy about where that belief came from.

The diplomat said there was no direct discussion of “security assistance” from Trump and that he “made the connection” with the “investigation into Biden” only after the transcript was published. His recollection of conversations with Rudy Giuliani, whom he believed was conveying the president’s desires, was vague, he said. Apologizing for his unreliable memory – Sondland has already “corrected” his testimony once, after apparently having his recollection refreshed by reading colleagues’ testimonies – he told a disappointed Schiff he couldn’t recall how the notion that the White House was holding up military aid awaiting the announcement of the probe became his “presumption.”

One thing he did remember? Telling the president that “Zelensky loves [his] ass.”

“It sounds like something I would say!” To chortles from the audience, Sondland continued: “That’s how President Trump and I communicate. A lot of four-letter words. Three letter.”

“Putting it in Trump-speak by saying he loves your ass he’ll do whatever you want, meant that he would really work with us on a whole host of issues,” Sondland explained, acknowledging that Zelensky was “eager” to work with the US.