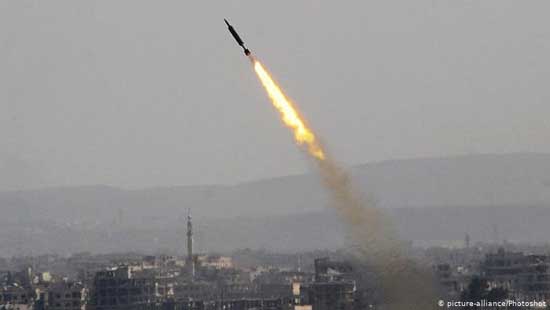 Israel has said it attacked Iranian and Syrian military targets near Damascus in retaliation to Syrian rockets fired towards Israel the day before. Syria’s air defenses destroyed most of Israel’s missiles.

Israel carried out “wide-scale strikes” on dozens of Iranian and Syrian military targets near Damascus in what it said was a counterattack for the previous day’s rockets on the Israeli-controlled Golan Heights, the Israeli Defense Forces announced on Wednesday.

The Quds Force is an elite arm of Iran’s Revolutionary Guards.

At least 14 people, including three civilians, were killed in Israeli strikes, said the Syrian Observatory for Human Rights, a war monitoring group. Among the dead were 11 Iranian and allied militia members as well as Syrian army personnel, the watchdog said.

According to SANA, the attacks were carried out from “Lebanese and Palestinian territories.” Israel sometimes carries out attacks on Syria from planes flying over Lebanon.

But the Syrian Observatory for Human Rights said Tuesday’s rockets were fired from around Damascus by groups loyal to President Bashar Assad’s government.

Israel says it has carried out hundreds of strikes in Syria against Iranian targets to establish its military presence and prevent weapons being delivered to the Lebanese Hezbollah, which is backed by Iran.

The series of strikes follows on from last week’s escalating tension between the Israeli military and the Gaza-based Palestinian militant group Islamic Jihad, which is allied with Damascus. Israel had recently carried out a targeted killing of a top commander of Islamic Jihad.

The operation was accompanied by a second strike, unconfirmed by Israel, on an Islamic Jihad leader in Damascus that killed his son and another person.

“Yesterday’s Iranian attack on Israeli territory by firing missiles … is the best proof of Iran’s real cause in Syria. The Iranian position poses a threat to Israel’s security, stability in the region, and the Syrian regime,” Adraee said.