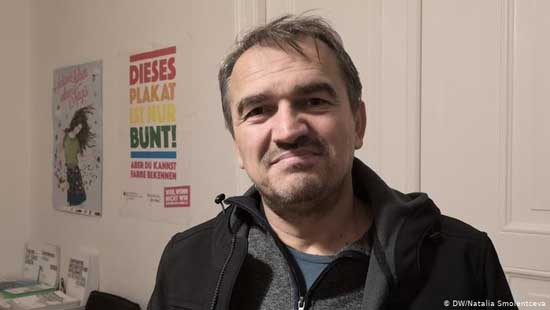 As anti-Semitism remains one of Germany’s most serious problems, one Berlin NGO is bringing Muslims and Jews together to fight discrimination through education. That means challenging mainstream German attitudes.

One November evening in Freiburg, 19-year-old Samuel was changing after working out at the gym when suddenly someone grabbed him from behind and tore off his skullcap. “You dirty Jew,” the aggressor shouted, throwing Samuel’s yarmulke into the garbage.

Shocked and fearing for his life, Samuel shared the incident on Facebook. Before the attack he would sometimes get “a nasty look” for wearing his skullcap in public, but he had not been attacked before, he told DW.

Many people asked Samuel about the nationality of the attacker, with the assumption that he was Muslim. Samuel found the question irrelevant. “Anti-Semitism is anti-Semitism,” he said, “no matter who is doing it.”

With anti-Semitism increasingly visible in Germany, one Berlin NGO is bringing Muslims and Jews together to fight discrimination through education.

Aycan Demirel, a Muslim from Turkey, was often witness to anti-Semitic incidents in Berlin’s Kreuzberg district. In 2000 he worked as a social worker and lived just next to the Fraenkelufer synagogue.

“Hostility, anti-Semitic talk about Jews — I’ve seen this time and time again in everyday life and in my work with local youths with migrant roots,” Demirel told DW. He decided to take a stand against anti-Semitism in the community.

The idea to create the Kreuzberg Initiative Against Anti-Semitism (KIgA) was born in the kitchen of the apartment that Demirel shared with the future journalists Doris Akrap and Deniz Yücel. In 2017,Yücel would be imprisoned in Turkey for just over a year after being accused of espionage.

At the time, anti-Semitism was not only a topic in Germany, but in Demirel’s native Turkey, as well. On November 15, 2003, two bombs exploded in front of Istanbul’s synagogues, killing 24 people. “This attack moved us,” Demirel said. “We did not want to stay silent about it.”

Fifteen years on, KIgA has become a well-known center for educational activities to combat anti-Semitism and Islamophobia in German society.

Following the arrival of more than a million refugees since 2015 — many of them Muslim — German media speculated about a new anti-Semitism, “imported” from Syria and Arab countries. The coverage worried Demirel.

“Today we need to be very cautious talking about Muslim anti-Semitism, because we have a right-wing avalanche coming at us, whose main focus is anti-Muslim sentiment,” Demirel said. Instead, he wants to define Muslims as partners in the fight against anti-Semitism.

“As religious minorities, Muslims and Jews have a lot in common,” Demirel said.

In October, a synagogue was attacked in the eastern German city of Halle. The gunman killed two people after failing to enter the synagogue. He confessed to having anti-Muslim and anti-Semitic motives.

It marked a turning point, after which “anti-Semitic threats can no longer be ignored by anyone,” Felix Klein, the government’s commissioner on anti-Semitism, told DW the day after the attack.

“Jews should not be portrayed only as victims, as those who were persecuted, and concentration camps prisoners,” Klein said. “This distorted image misshapes the perception of Jews.”

Demirel said many people he had encountered in his early advocacy believed that anti-Semitism was history.

“We go to memorial sites, attend the Anne Frank exhibition, and that’s supposed to be just fine,” Demirel said.

KIgA has developed several educational methods, including discussions and workshops for school children and teachers. The work addresses not only the Holocaust, but also contemporary conspiracy theories and the Israeli-Palestine conflict.

Demirel’s daughter is 10. Because of her father’s work she has visited a number of synagogues and Jewish museums. She attends school in Kreuzberg. Do her classmates know as much about the issue as she does? “Hardly,” Demirel said. But they already use the word “Jew” as a slur in the schoolyard, interchangeably with homophobic and ableist insults.

Almost 1,800 anti-Semitic offenses were reported across Germany in 2018 — an increase of 20% on the previous year. According to the Research and Information Portal for anti-Semitism (RIAS), in Berlin, two anti-Semitic incidents are reported per day.

Nearly 30% of the incidents in Berlin are linked to far-right groups. “But it would be a simplification to say that anti-Semitism is only a problem among the far-right,” Alexander Rasumny, of the research and reporting center RIAS, told DW. More than 40% of the cases do not have an easily identifiable political motive.

“The fact that there is a party in the German parliament and local state parliaments that brings an anti-Semitic stances into the political mainstream contributes to the normalization of hate,” Rasumny said, referring to the  far-right Alternative for Germany (AfD). After the 2017 elections, the party ended up with 94 seats in the federal parliament, the Bundestag, and still retains 91.

Rasumny said German families had failed to discuss their own Nazi histories, which could contribute to increasing anti-Semitic attitudes.

“While the debate took place at state level [in politics], many families still haven’t touched upon that topic at home,” Rasumny said.

A recent study by the foundation Remembrance, Responsibility and Future (EVZ) found that 35% of Germans believe that their relatives were victims of the Nazi dictatorship. But fewer than 20% say members of their families were perpetrators, which Rasumny considers a “twisted perception” of the Nazi era.