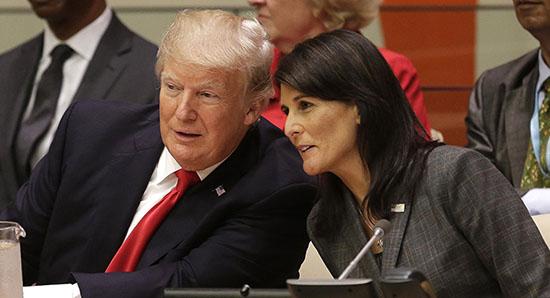 In August, Nikki Haley tweeted about her “complete support” for US Vice President Mike Pence, rejecting “false rumours” of her intention to take part in the 2020 elections.

Former US Ambassador to the United Nations Nikki Haley was “under active consideration” to replace Vice President Mike Pence ahead of the country’s 2020 election race, according to the anonymous author of a book that hit shelves on Tuesday.

In the more than 250-page book titled “A Warning,” the author who was only identified as a “senior official in the Trump administration,” describes Haley as one of those who have been “in the lurch for weeks, months, or longer” on how long their tenure at the White House might last.

According to the author, Haley, who stepped down from her job in late 2018, was seen as the ideal candidate to “step in as vice president” instead of Pence.

“Although Mr. Pence has been loyal to a fault, the president is always eager to ‘shake things up’, and Trump’s view of loyalty, of course, is self-serving to the extreme,” they wrote, claiming that “on more than one occasion, Trump has discussed with staff the possibility of dropping Vice President Pence in advance of the 2020 election.”

The author refers to some of Trump’s closest advisers who allegedly suggested that Haley could “help shore up the president’s unpopularity with women,” something that they assert only “demonstrates how little this White House understands women in the first place.”

Haley Denies ‘False Rumours’ of Her Push for 2020 Election Ticket

The remarks come after Haley’s new book titled “With All Due Respect: Defending America with Grit and Grace” was released earlier this month, in what added further fuel to speculations about her considering a 2020 run, given the timing of the book’s release.

This was preceded by Haley rejecting in August “false rumours” of her drive to run for the presidency in a tweet, where she also signalled her “complete support” for Pence who “has been a dear friend of mine for years.”

In a separate development that month, President Trump emphasised Pence is “100 percent” his 2020 election running mate after a Wall Street Journal op-ed called for Pence to be replaced by Haley.

“I love Nikki. She’s endorsed me. She’s my friend. She’s a part of my campaign. But Mike [Pence] has been a great vice president. He’s 100 percent, Trump told Fox Business Network, adding that “you can’t break up a team like that.”