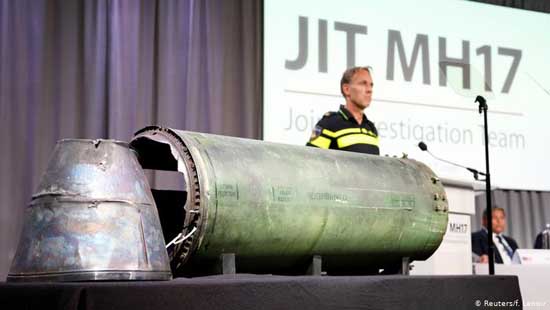 Dutch-led investigations into the downing of Malaysian Airlines flight MH17 over Ukraine have unearthed new evidence that points the finger squarely at Russia. It could implicate the Kremlin, writes Konstantin Eggert.

March 9, 2020 is set to be one of the most unpleasant dates in the Kremlin’s diary. On this day, a court in the Hague will start hearing the case against those suspected of shooting down Malaysian Airlines flight MH17 over Ukraine on July 17, 2014.

298 passengers and crew died when the airliner was hit by a surface-to-air BUK missile over the territory controlled by Russian-backed separatists. The Dutch-led International Joint Investigation Team (JIT) claims the missile launcher was brought into Ukraine from Russia.

So far the JIT has talked about four suspects who will in all probability be tried in absentia — three Russian citizens and one Ukrainian. All have murky post-Soviet military biographies and none is known to the wider public.

However, recent JIT revelations may change this picture. On their website, the investigators published recordings of intercepted telephone conversations between the pro-Russian rebels and, among others, Russian Defense Minister Sergei Shoigu and Vladislav Surkov, President Vladimir Putin’s adviser and point man for Ukraine.

These recordings highlight Russia’s extensive influence on the self-proclaimed Donetsk and Luhansk People’s Republics. In one recording, Alexander Borodai, a Russian citizen who in 2014 posed as the “prime minister” of Donetsk, states unambiguously that his main goal is to “defend the interest of the Russian Federation.”

This is not the first time that such recordings have surfaced. Ukrainian security services as well as the investigative portal Bellingcat made public similar tapes in the past. Moscow has always categorically denied any involvement in the downing of flight MH17 and denounced the material as “fake news” and “manipulation” as part of Kyiv’s “propaganda effort.”

Establishing the chain of command

However, the new recordings are official documents and will be used as the prosecution’s evidence in the Dutch court. They dispel the Kremlin’s assertions that the separatists are independent actors. In fact, they prove exactly the opposite: there are no “republics” to speak of.

It is the Russian emissaries that run these territories in close contact with the top brass in Moscow. The court must find out what chain of command was in place that ordered the BUK missiles into Ukraine. After the recent JIT publications, it’s increasingly likely that the evidence will lead all the way to the Kremlin.

Few people believe that the downing of the Malaysian Boeing was deliberate. It is most likely the rebels thought they were shooting down a Ukrainian air force transport plane. They even boasted about it on social media before reality kicked in and they had to delete their posts.

The trial will crush the Kremlin’s assertions that “Ukrainian nationalists” unleashed a civil war against the peaceful people of the predominantly Russian-speaking Donbas region and that Russia has nothing to do with it.

Russia’s Ukraine policy itself may become the focus of the trial. The West has largely forgotten about the war which very much suits the Kremlin. A trial based on the new evidence may change this, with negative consequences for Moscow.

Despite assertions to the contrary, the Russian leadership cares about Western public opinion. It hopes to wear the West down, force it to abandon support for Ukraine and implicitly recognize Moscow’s unofficial supremacy in what remains of the post-Soviet space.

Putin is trying to compel Ukraine’s president, Vladimir Zelensky, to abide by the Minsk peace agreements and grant special status to the Russian-controlled Donbas region. Putin’s thinking is that European and maybe even US sanctions against his regime will then be eased if not abandoned altogether.

A trial implicating the Russian leadership will severely damage its current strategy, force the Ukrainian presidency to adopt a hard line vis-à-vis Moscow, and muffle those EU voices calling for a renewed dialogue with Putin.

Moreover, if top figures of the Russian regime are indeed implicated, relatives of the victims may decide to sue the government for compensation. The Kremlin could offer payments to avoid a scandal. But this would be tantamount to admitting culpability.