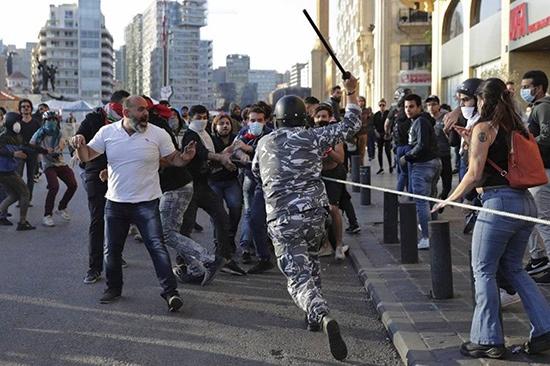 Hundreds of young protesters thronged around the parliament building, blocking the entrances and vowing to disrupt the session.

BEIRUT: Thousands of protesters rallying against the Lebanese political elite blocked roads in central Beirut on Tuesday, preventing lawmakers from reaching the parliament and forcing the postponement of a legislative session.

The session had been scheduled even though the country is still without a Cabinet following the prime minister’s resignation amid unprecedented demonstrations that have gripped Lebanon since mid-October.

The protesters scuffled with riot police as they closed all roads leading to the parliament building in Beirut.

When one legislator headed toward the building and could not reach it and turned back, his bodyguards opened fire in the air to clear the way. No one was hurt in the shooting.

The protesters are questioning the constitutionality of a parliament session in the absence of a government. An earlier session last Tuesday was postponed amid the protests.

Prime Minister Saad Hariri resigned his government on Oct. 29 in response to the protests, which erupted over proposed new taxes but have since snowballed into calls for the government to resign and for the entire political elite that has ruled Lebanon since the end of its 1975-90 civil war to step aside.

The political deadlock comes as Lebanon is passing through its worst economic and financial crisis in decades. The country, which suffers from widespread corruption, has one of the highest debts in the world, standing at $86 billion, or 150 of the GDP.

Meanwhile, Lebanese banks reopened to customers on Tuesday after a week-long strike during which bank employees refused to come to work, fearing for their security amid random capital controls that have angered clients.

On Monday, the Banks Association declared formal controls, limiting withdrawals to $1,000 per week, and allowing transfers abroad only for “urgent matters.”

However, most banks on Tuesday were allowing depositors to withdraw only $500 from U.S. dollar accounts.

Heavy police and army reinforcements were deployed in downtown Beirut since late Monday to cordon off the area around the parliament.

“We are here today because there is a parliament session that is anti-constitutional,” said protester Rania al-Akhras, speaking in English and decrying the ineffectiveness of the legislators. “What they need to be doing is selecting a prime minister and a government.”

Later Tuesday, the parliament’s secretary-general, Adnan Daher, read a statement saying that the session has been postponed “until a new date is set.” He added that current parliamentary committees will continue their work as there was no session on Tuesday to elect new committees.

President Michel Aoun has not set a date for consultations to select a new prime minister and there are deep divisions between the country’s political powers over the shape of the future Cabinet.