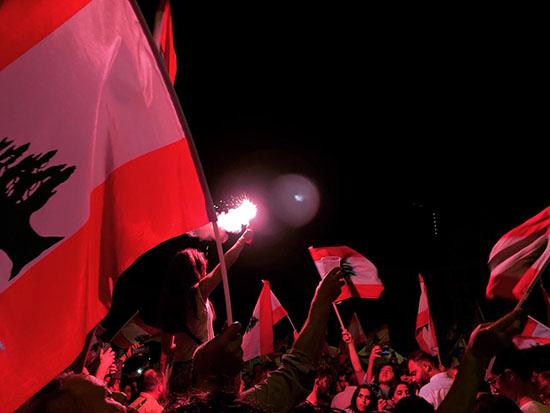 Hizbullah at first backed and then withdrew support for street protests in Lebanon in part because of its support for neo-liberal economic policies and its loyalty to the ‘Awn government, writes As`ad AbuKhalil.

The New York Times in its first coverage of the protests in Lebanon, actually fabricated a story that protesters stormed Hizbullah offices in the southern suburbs in Beirut, which had not witnessed any protests. There were no offices of Hizbullah MPs targeted. There were offices of the other major Shi’ite group, Amal Movement, targeted in Nabatiyyah, but all the anger against the dominance of Amal and its corrupt leadership was automatically transformed in Western media — in all of them — as protests against Hizbullah.

In his first speech after the outbreak of the protests, Hizbullah leader Hassan Nasrallah alienated many of his (corrupt) allies when he asserted that those protests could not be blamed on foreign conspiracies or on embassies, but are local indigenous protests motivated by socio-economic grievances.

But Nasrallah seemed of two minds about the protests  in his two later speeches: On the one hand Hizbullah sympathized with the protesters in their rage against corruption and socio-economic injustices, but on the other hand he disagreed with the demand to bring down the government and administration of President Michel ` Awn.

Nasrallah seemed to give his enemies a reason to defy him by declaring red lines for the protestors and anyone wishing to infiltrate them. By strongly supporting the administration and cabinet (referring here to an Arabic word inaccurately described as “government” in English-language media), Nasrallah was expressing solidarity with his Christian ally ` Awn and his Free Patriotic Movement.

In the most recent election last year, despite its very strong showing, (with the largest number of nationwide votes, followed by its Christian ally), Hizbullah sensed that people in its areas of dominance — South  Lebanon and the Biqa` valley — are fed up with corruption and the lack of economic opportunities.

Furthermore, Hizbullah has struck a solid alliance, since at least 2005, with the Amal Movement.  Amal (the movement headed by Parliament Speaker Nabih Berri) has a terrible reputation for corruption and mismanagement.  Crowds all over south Lebanon in the first two days of the uprising chanted obscene slogans against Berri and his wife because Amal cracked down on the demonstrations with the tacit support later of Hizbullah.

Berri’s wife is accused of requiring all major businesses in the south of awarding her a substantial share.  Berri, Jumblat, and Ja`ja` are three warlords who profited immensely — first from the war and later (in the case of Berri and Jumblat) from state budgets and projects.  Hizbullah had declared its intention to fight corruption and assigned its MP, Hasan Fadallah, to lead the charge.  But there have been no results of Hizbullah’s fight against corruption whatsoever, and Fadlallah — when asked about progress in his mission — says files have been transferred to the justice system. But the justice system in Lebanon is notoriously corrupt, and files invariably end up being frozen if they deal with corrupt politicians or their cronies.

Hizbullah was since its inception in the mid-1980s aloof from government services, and only joined the cabinet reluctantly after the 2005 assassination of former Prime Minister Rafic Hariri.  It has had ministers in cabinets since, but their performances have not been remarkable at all.  While they have not been accused of corruption, they have never fought within or outside the government against corruption.

Moreover, Hizbullah is not a progressive party when it comes to social justice.  It identifies with the struggles of people in developing countries, but it does not have a critique of capitalism beyond general outlines.  Hizbullah’s minister, Muhammad Fneish, supported the privatization of the electric company of Lebanon, when he held the energy ministry.  In the current crisis, Hizbullah stood by the “reform paper” which was presented by Sa`d  Hariri at the suggestion of the IMF.

Hizbullah does not object to privatization per se and speeches by Nasrallah during the crisis have not revealed much appreciation for the severity of the current economic crisis. In his last speech, Nasrallah spoke about encouraging industrialization and agricultural development, but those are long term goals and can’t be activated instantly to deal with the current crisis.

Hizbullah’s agenda in Lebanese politics is political through and through: their attention to economic matters has been scant. Their role in discussion of budget priorities within Lebanese cabinets has been rather minimal, often sticking to the position of their allies.  Hizbullah only objects to excesses of neo-liberal policies, which the pro-Saudi/pro-U.S. rulers impose, but not to neo-liberalism itself.  Hizbullah has been willing to allow its partners in government (the pro-Saudi camp) to pursue greedily capitalistic policies as long as its arms are not made to be an object of political disagreement in the government.

This crisis has revealed that Hizbullah can’t maintain its position anymore, in which it claims to fight corruption while maintaining its alliance with the Amal Movement and `Awn’s Free Patriotic Movement. Its Shi`ite ally has been notoriously corrupt, and helped itself to the state coffers. Its Christian ally struck a deal with the now resigned Prime Minister Sa`d Hariri at the expense of its earlier promise to root out corruption, and to hold accountable those elements of past Hariri administrations who mismanaged and/or embezzled public funds.

Hizbullah, being notoriously worried (and not always without reason) about Western/Israeli plots against its arsenal — the only factor deterring Israel from attacking Lebanon — prioritizes its alliances over its declared goal of fighting corruption in Lebanon.

The mass base of Hizbullah was clearly sympathetic to the protests, especially in the first two days.  Chants against Berri did not necessarily offend supporters of Hizbullah because the party historically complained about the corruption of the Amal Movement.  Nasrallah in his speeches did not come to the defense of Berri; in the last three speeches, Nasrallah did not even mention Berri. For that, Berri supporters on social media made unambiguous criticisms of allies who betrayed their movement. Relations between the two parties have become strained as a result.  Relations could have deteriorated further (the two sides engaged in bitter armed clashes in the 1990s) if it was not for Hizbullah deciding to withdraw its supporters from among the protesters in the streets.

Hizbullah watched as Amal thugs beat up demonstrators in downtown Beirut (typically, all Western media blamed Hizbullah, when the thugs were identified by name and they all belonged to Amal).  In Nabatiyyah in south Lebanon, the Amal-Hizbullah-dominated municipal council crushed the local protests and Hizbullah supporters also participated in breaking up protests groups.  Hizbullah in the south was willing to protect the corrupt political order in order to avoid frictions with its Shi`ite ally.

Hizbullah became suspicious as the protests went on, partly because a situation of total breakdown scares the party, and partly because enemies of Hizbullah in Lebanon (the pro-Saudi elements, like the Lebanese Forces, the party of Walid Jumblat, and the movement of Sa`d  Hariri) smartly decided to (hypocritically) join the protests to steer them in a different direction. They wanted to deflect from the leftist influence in the demand to bring down the whole regime and bring about total socio-economic transformation.

What started as a galvanizing radical protest movement later developed into different protests with radical, regional variations. For example, the protests in Jal-Ad-Dib in East Beirut were sabotaged by a carnival for the thugs of the Lebanese Forces, while the pro-Saudi goons of Ashraf Rifi infiltrated the protests in Tripoli.

Hizbullah could have continued to support the protests instead of withdrawing from the street, although Nasrallah feared sectarian provocations, which the other side has been skilled at.  Nevertheless, Hizbullah’s mass base has become fed up with massive corruption and socio-economic injustices.  The base of Hizbullah is fully supportive of the resistance movement of Hizbullah (and that is true of the entire Shiite community) but won’t tolerate a preservation of the corrupt order.

Shi`ites know that Nasrallah lives an austere and ascetic life, and that he has never been tainted with corruption.  But that deserved reputation of incorruptibility does not apply to all politicians and cadres of Hizbullah.  In the most recent speech, Nasrallah offered to turn over to the court any person within Hizbullah who is accused of corruption.  But that is not enough, because the justice system is the last place to address corruption and to punish those who are guilty.

The protests in Lebanon don’t give any signs of waning, and the public rage is real despite recent attempts by the ruling class to exploit and infiltrate the protest movement.  But it was ironic that Hizbullah (the party that is least accused of corruption and of embezzlement of public funds) decided to stand in defense of the political order and in particular a weakened President ` Awn.

As’ad AbuKhalil is a Lebanese-American professor of political science at California State University, Stanislaus. He is the author of the “Historical Dictionary of Lebanon” (1998), “Bin Laden, Islam and America’s New War on Terrorism (2002), and “The Battle for Saudi Arabia” (2004). He tweets as @asadabukhalil.