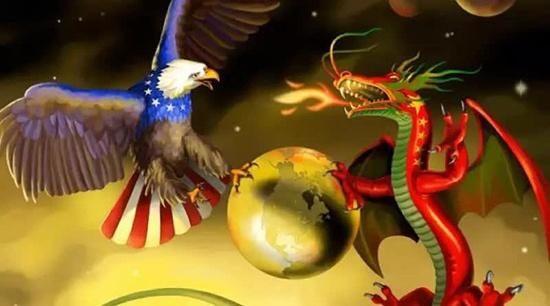 While on the one hand, the alarming speed of Beijing’s rise both on the economic and military fronts witnessed a steep increase in speculation among American leaders and theorization by scholars about Chinese intentions, recent scholarship is engaged in building new theories but the essence remains the same as to how to contain China.

For instance, an article in Foreign Affairs magazine titled ‘The United States Should Fear a Faltering China: Beijing’s Assertiveness Betrays Its Desperation’ in October 2019 contained such theorization and pointed at the fresh imperative to deal with China at a moment when its relative economic decline is pushing it toward a more aggressive posture on the military front. The article notes: “China’s economic conditions have steadily worsened since the 2008 financial crisis. The country’s growth rate has fallen by half and is likely to plunge further in the years ahead, as debt; foreign protectionism, resource depletion, and rapid aging take their toll. China’s economic woes will make it a less competitive rival in the long term but a greater threat to the United States today”.

After the turn of the 21st century, it was evident that American political and scholarly debate had begun to express such contentions. For instance, American scholar John Mearsheimer, by making a historical analysis of the United States’ own behavior as a rising power in the past and then comparing it to Chinese behavior now, argued that China’s rise was bound to be hegemonic. He postulated in 2005 that if China maintained the pace of economic growth and military buildup that it was making at the time, it was likely to be locked into intense security competition with the US, with the possibility of military conflict.

US Containment strategy toward China was visible in the policies adopted by the administration led by president George W Bush which was further strengthened by subsequent administrations led by Barrack Obama and Donald Trump through their Asia pivot and Indo-Pacific strategy respectively. The Bush administration in an attempt to contain Chinese ambitions not only expressed its commitment to protect Taiwan from Beijing’s territorial claims, it expanded arms sales to the island. The administration reportedly shifted the focus of US missile defense plans from Europe to the Pacific and called for long-range weapons targeting China’s growing military power.

American leaders and scholars alike continued to express concerns over Beijing’s ever-growing expenditure on military modernization in the absence of palpable threats, lack of transparency in its military strategy, hegemonic policies in the South China Sea and maintenance of special relationships with “rogue” regimes in Sudan, Iran and North Korea. Some scholars saw impeding danger in China’s increasing demand for energy resources (oil and natural gas) and export of Chinese goods with import regulation.

The US for long was concerned with the Chinese failure to maintain international standards on intellectual-property rights within its territory, leading to a surge in cases of duplication, piracy and counterfeiting and losses for American companies. Beijing was allegedly involved in a process of industrial espionage to secure updated technology, which indicated that multinational companies had to reveal many operational and technological secrets as a precondition to gain access and operate in the biggest market of the world. Although China reportedly showed seriousness in implementing its commitment under the Protocol of Accession to the World Trade Organization, it adopted policies contradictory to free trade and principles of the organization after joining.

Many American experts argued that Beijing accepted few obligations requiring it to give up or substantially reduce its stronghold on the key sectors of the economy. While Beijing made concerted measures to insulate its energy sector from global markets, the steel sector emerged as an international leader because of supportive measures adopted by the Chinese state. It was only under pressure from its major trading partners such as the US and the European Union that Beijing modified or removed some of the policies that were contradictory to its WTO obligations. China adopted discriminatory value-added tax (VAT) to discourage foreign competitors and encourage key indigenous industries.

This apart, adoption of special policies to discourage the use of imported components for making telecommunication equipment and rejection of suggestions for unilateral liberalization since 2006 indicated Beijing’s ambitions to take quick economic strides without taking international norms seriously. While the mammoth size of the Chinese market and its low-cost products attracted many major economies to engage in trade with and invest in the country helped its economy to grow rapidly, the US remained concerned as to the Chinese engagement with the world on its own terms.

From a military and strategic perspective, the US not only viewed Chinese assertion of indisputable sovereignty over the South China Sea at the expense of the territorial claims of Vietnam, Malaysia, the Philippines and others as violation of international laws, but it suspected Beijing’s geopolitical moves as strategic maneuvers to gain control over strategic sea routes. A historical factor that has informed US scholarship contributing to deep-rooted mistrust and irreconcilability between American and Chinese geopolitical interests is Beijing’s isolation from world politics during much of the Cold War era and its denial of membership in the United Nations until 1971. It is argued that as a former superpower (Middle Kingdom), this development might not have been glossed over by China, such that it was likely to adopt retributive policies once it rose to prominence again.

Dr. Manoj Kumar Mishra has a PhD in International Relations from the Department of Political Science, University of Hyderabad. He is currently working as a Lecturer in Political Science, S.V.M. Autonomous College, Odisha, India. Previously, he worked as the Programme Coordinator, School of International Studies, Ravenshaw University, Odisha, India. He taught Theories of International Relations and India’s Foreign Policy to MA and M.Phil. students.