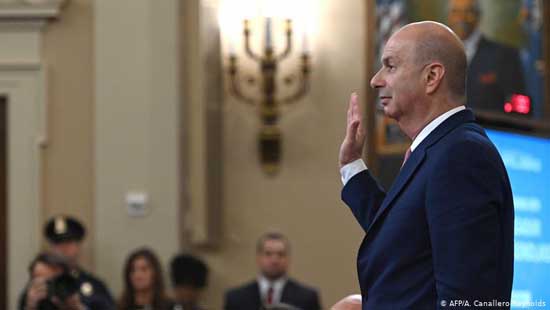 US diplomat Gordon Sondland has testified that Donald Trump’s personal lawyer was pursuing a “quid pro quo” with Ukraine. The envoy to the EU is a crucial witness in the impeachment inquiry into the president.

US Ambassador to the European Union Gordon Sondland told an impeachment hearing on Wednesday that he was directed by President Donald Trump to work with his personal lawyer Rudy Guiliani on pressuring Ukraine.

Sondland said in prepared remarks that Giuliani had sought to push Ukrainian President Volodymyr Zelenskiy to investigate the 2016 US election and the son of former Vice President, and potential 2020 election rival, Joe Biden.

“We followed the president’s orders,” Sondland told an open hearing of the House Intelligence Committee. “We did not want to work with Mr Giuliani. Simply put, we played the hand we were dealt.”

He said “it was no secret” that there was a “quid pro quo” with Ukraine — in other words, that Ukraine’s president would be invited to a summit at the White House in return for launching a probe into Biden.

That contradicts Trump’s account that there was no exchange of favors between the countries.

“Was there a ‘quid pro quo?’ As I testified previously, with regard to the requested White House call and White House meeting, the answer is yes,” Sondland said.

‘Everyone was in the loop’

Ambassador Sondland told committee members that Secretary of State Mike Pompeo and other senior officials in the Trump administration were kept informed about the Ukraine discussions. He also said he voiced “concerns” to Vice President Mike Pence that the suspension of US military aid to the eastern European country “had become tied” to the investigations sought by Trump.

“They knew what we were doing and why,” he said. “Everyone was in the loop.” He added that statements from other witnesses suggesting he was engaging in “rogue diplomacy” were “absolutely false.”

Responding to the testimony, a Pence spokesman said any conversation about the link between military aid and investigations “never happened.”

Sondland acknowledged under questioning that Trump never directly spoke to him about military aid to Ukraine being conditional on political investigations. Rather, he said, this was his “personal guess” based on comments from Guiliani.

Speaking to reporters while the hearing was underway, Trump said he wanted “nothing” from Ukraine and denied demanding a quid pro quo. He added that Sondland was “not a man I know well.”

Sondland, a wealthy hotelier and Trump donor, is the most anticipated witness to front the Democrat-led inquiry, which began last week. Democrats are seeking to establish whether the president’s attempts to pressure Zelenskiy amounted to an abuse of the power of his office.

House Intelligence Committee Chairman Adam Schiff called Sondland’s testimony “a very important moment in the history of this investigation” and said it showed “for the first time that knowledge of this scheme was pervasive.”

The inquiry stems from a phone call Trump made to Zelenskiy on July 25 in which he prodded Kyiv to investigate Joe Biden and his son Hunter, who was on the board of Ukrainian energy firm Burisma.

Trump and his allies have dismissed the impeachment hearings as a desperate attempt by Democrats to oust him from power.