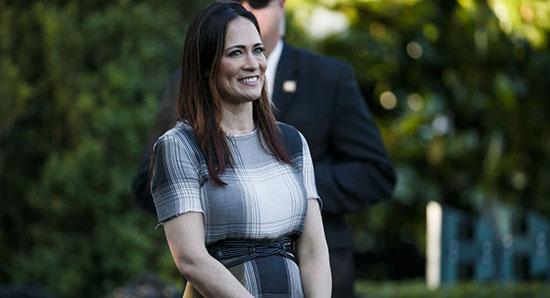 White House Press Secretary Stephanie Grisham in a Tuesday interview with a Virginia radio station alleged that Trump staffers made a surprising discovery when they moved into the White House in January 2017.

‘We came into the White House – I’ll tell you something, every office was filled with Obama books. And we had notes left behind that said ‘You will fail’, ‘You aren’t going to make it’. And in the press office, there was a big note taped to a door that said, ‘You will fail’. And they had filled, they had filled the…’ Grisham said, before cutting herself off.

Following the broadcast, The Daily Mail detailed Grisham’s allegations that the Obama team left cabinets in the press office ‘filled’ with books by US President Barack Obama with one particular ‘You will fail’ note, which she claimed had been taped to the inside of a cabinet door.

Susan Rice, who served as National Security Adviser in the final years of the Obama administration, was one of the first to respond to Grisham’s story. “This is another bald-faced lie”, Rice said, cited by The Daily Mail.

Rice said in her memoir ‘Tough Love’ that she left a kind note to her successor, Michael Flynn, offering “my best wishes for his success in a job so crucial to the nation’s security”.

ABC News correspondent Jonathan Karl tweeted that he took photos in the West Wing on the first night of occupancy by the Trump administration, stressing that he saw no offices “filled with Obama books”.

​Cody Keenan, a former Obama speechwriter, humorously tweeted that he had left his cell phone charger in the office.

​Ex-Obama aide Rudy Mehrbani tweeted that he did a final sweep of a floor in the Eisenhower Executive Office Building (EEOB) as the old administration headed out the door.

​The former Press Secretary to First Lady Michelle Obama tweeted a picture of the note left for her successor.

​The Daily Mail said, citing seven unnamed former West Wing aides – all of whom came to the White House at the beginning of the Trump administration – that they alleged to hearing about the mean notes on day one.

“It was a mess that first week […] Yeah, there were mean notes left in odd places. One in a deputy press secretary’s office, one inside a desk drawer in upper press, another on a bathroom mirror. They were all about how we were doomed to failure”, an anonymous former Trump administration aide said, cited by The Daily Mail.

Another unnamed source told the UK-based media outlet, justifying the striking lack of photographic proof, that staff was frantically adjusting to new offices and new roles, and “it didn’t make the top 20 list of things we were thinking about”.

A third unnamed source, cited by The Daily Mail, claimed that after Grisham made her story public on Tuesday that “those notes definitely happened. They even left us Russian vodka in the cabinet […] They were trolling us from the minute we got there. It was definitely just ridiculous. We were trying to find the bathroom, and we get these notes saying ‘You will fail’ and ‘You’re not going to make it'”.

Grisham responded later in the day to pushback from former Obama staffers by emailing that she was “not sure where their offices were and certainly wasn’t implying every office had that issue […] In fact, I had a lovely note left for me in the East Wing, and I tracked the woman down and thanked her […] I was talking specifically (and honestly) about our experience in the lower press office — nowhere else. I don’t know why everyone is so sensitive! […] At the time we saw it as a kind of a prank, and something that always happened. We were so busy trying to learn where the bathrooms were and how to turn on the lights, it wasn’t that big of a deal”.

In her post-pushback email, Grisham claimed that a mean note was inside of cabinets belonging to what she described as the “lower” staffers.

“The books were inside the cabinets of lower press [staffers], as was one of the notes, which was taped inside […] I believe others have come out saying this was true. Either way – this shouldn’t be a big deal, I was telling an anecdotal story in response to a question about when we first took office”.

According to US-based media outlets, jokes and trolling between old and new administrations in the White House are not uncommon.

The New York Post recalled a curious episode from the Oval Office, in which the Clinton administration left the West Wing in 2001 and junior staffers famously removed the ‘W’ key from their computers before heading out. The incoming president was George W. Bush, who was differentiated in name from his ex-president father, George H.W. Bush, by the ‘W’.