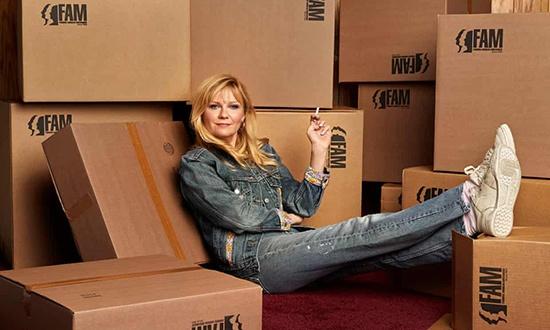 On Becoming a God in Central Florida takes aim at pyramid schemes, and Dunst is tipped for awards season – but she’s trying not to care about that

On Becoming a God in Central Florida is ostensibly a show about multilevel marketing – but it’s really about what we are content with.

The Showtime comedy follows new mother Krystal Stubbs as she climbs the ranks of a pyramid scheme, Founders American Merchandise (FAM), so she can keep her house.

Alexander Skarsgård is her desperate husband, Travis, convinced there is more to life for him than his “J-O-B”, spelled out with disdain each time it is referenced by devotees of FAM.

Set in 1992, the aspiration theme is very relevant to the capitalism-gone-rampant 2019 we live in. What are we happy with? Would we be happy if we had what our neighbour had? Why is one person happy with exactly the same thing that makes the next person is so unhappy?

Kirsten Dunst plays Stubbs, and says the show encapsulates the fallacy of the “American dream” being sold to people via multilevel marketing scams. The scams have enjoyed a recent resurgence, with people recruited to sell a product – in FAM’s case home-cleaning products – and to recruit other people to sell the products to get a cut of their sales.

People are lured with promises of six figures a year, but the model is unsustainable. Those at the bottom often end up losing their money as they buy products they can’t sell.

“I’m really fascinated by [multi-level marketing scams] and how they prey on people who have the least money to give, and the [lowest levels of] health. It just destroys families … [Pyramid schemes are] a big part of … our culture and I didn’t really know much about it. I just thought it was a really good way to to talk about the American dream, … what it does to people,” she says over the phone from Los Angeles.

“People focus on money, and you can’t survive on minimum wage. But then everything you see, money is the focus; people aren’t happy with what they have.

“These schemes … prey on people that are emotionally in distress as well. So it’s just awful that it’s even legal to do that.”

At the beginning of the TV show, Stubbs is very happy with what she has: a healthy daughter, a loving (if distracted) husband, a house and a job at a water park. But Travis strives and strives for so much more that he ends up in an early grave.

All Stubbs is left with to keep a roof over her baby’s head and food on the table is Travis’s part in the FAM. Her motives certainly provoke compassion but she pushes the limits of empathy each episode. She recruits her lovely, generous neighbour, for instance, even though she knows it’s a scam, and he ends up putting his family’s livelihood at risk. It’s the kind of character that would be lauded as “complex” if it were a man, and Dunst says originally Stubbs was not written as a woman.

“I don’t think it would have been as interesting [if Stubbs were male] because she wears her emotion so in front of you,” Dunst says. “She doesn’t care about what anyone thinks of her, and she can be very aggressive and a little nuts. And I think that’s fun to watch.

“I think … that makes her more vulnerable … You care about her more because she is like she’s just coming from a place of trying to survive with her daughter.”

Dunst gave birth to her son only five months before she began shooting, and at times on set she felt crippled with exhaustion.

“Being a parent, your emotions are way more easily active – and I think that’s bad and good,” she says.

“There’s an anxiety that happens with mums where you just think of the worst thing that could possibly happen in every situation. It starts to go down, I think, the older they get, but oh my god, in the beginning it was just like a horror movie that would run through my head, of shit that can happen to him.”

Dunst has spoken during her press cycle about feeling under-appreciated by industry peers in a career that has spanned Dick, Jumanji, the Virgin Suicides and Melancholia – but no awards. She’s trying hard not to care about the awards buzz building around her performance.

“When I said that [I felt underrated] I mostly meant Marie Antoinette and Drop Dead Gorgeous. Those movies were not reviewed well, and everyone loves them now. I feel like a lot of things I do, people like later.”