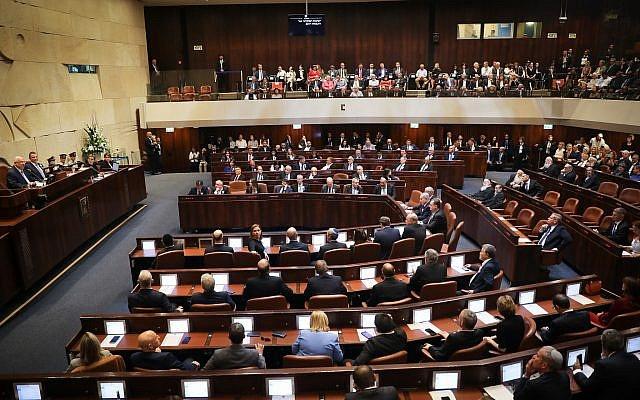 After Gantz and Netanyahu fail to build government, never before used electoral law opens last window for any MK to win majority backing — or new elections will be triggered

The plenum hall of the Knesset during the opening ceremony of the 22nd Knesset, in Jerusalem on October 3, 2019. (Hadas Parush/Flash90)

Israel’s political system was to make history Thursday, entering for the first time a specially designated 21-day grace period in which any member of the Knesset will have the opportunity to become prime minister.

Blue and White chairman Benny Gantz said Wednesday night that he had failed to form a coalition government, handing the mandate back to President Reuven Rivlin after 28 days. Prime Minister Benjamin Netanyahu had also failed to cobble together a coalition after he was given the first chance to form a government after the September 17 elections.

During this time, a majority of 61 serving MKs may ask Rivlin to appoint as prime minister any member of Knesset who agrees in writing to take on the role.

That includes those who have already failed to do so in previous rounds, according to Article 10 of Israel’s Basic Law: The Government, so Netanyahu and Gantz are both still in the running.

Any MK who wins majority support during the 21-day period, which begins Thursday and ends at midnight on December 11, would then be appointed prime minister-designate by the president, the law states. That MK then has a further 14-day window to form a government and get it approved by the Knesset.

If no such government is approved, the 22nd Knesset must be dissolved and Israel will find itself headed to its third election in the span of a year.

Both Rivlin and Knesset Legal Adviser Eyal Yinon issued special announcements and directives on Wednesday about the rules for the next 21 days, as Israel has never experienced this phase of the electoral process before.

Yinon wrote that lawmakers will be allowed to recommend more than one candidate, who will be accepted on a first-come, first-serve basis.

If December 11 passes without a new prime minister-designate, the law requires that the Knesset dissolve itself, with election day scheduled for a Tuesday at least 90 days later. Elections for the 23rd Knesset would thus likely take place in early March.

With March 10, 2020 likely to be the nearest Tuesday, which is also the day of Purim, the vote may be moved so as not to coincide with the Jewish holiday.

Israel’s political system has been at an unprecedented impasse since the April 9 election when it first failed to produce a government.

When coalition talks collapsed on May 30, Netanyahu, fearing that the mandate would go to his rival Gantz, pushed Likud and other parties to vote to dissolve the short-lived 21st Knesset, triggering new elections on September 17.

But that vote, too, produced no clear winner, and after Netanyahu could not assemble a coalition by mid-October, the opportunity went to Gantz.

Rivlin urged both leaders to form a unity government of Blue and White and Likud. He suggested a power-sharing agreement whereby, he indicated, Netanyahu would take a leave of absence if he is indicted in the three corruption cases pending against him. The attorney general is expected to announce charges against Netanyahu in the coming days.

But talks broke down over who would serve as prime minister first; Netanyahu’s insistence on negotiating on behalf of the bloc of 55 right-wing and religious lawmakers who backed him; and Gantz’s refusal to serve under the prime minister facing criminal charges.