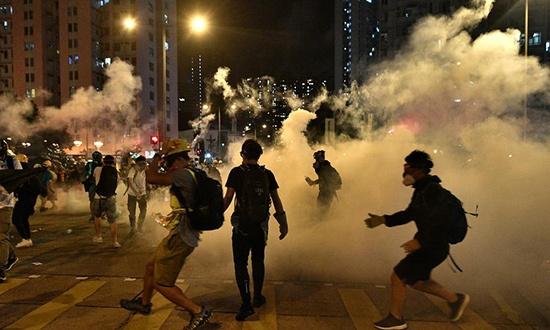 Despite the mutual exchange of acrimony over a US Senate bill requiring the president to monitor human rights abuses in Hong Kong, Washington won’t take substantive action against the territory. Neither will China take extreme measures to suppress violent protests in Hong Kong.

The US Senate last night unanimously passed legislation to put in place an annual review of Hong Kong’s special trade treatment under US law. Styled “The Hong Kong Human Rights and Democracy Act,” the bill also allows (but does not require) the president to impose sanctions on officials deemed guilty of human rights abuses.

China’s Foreign Ministry denounced the bill, claiming that it “neglects facts and truth, applies double standards and blatantly interferes in Hong Kong affairs and China’s other internal affairs.” It warned that “China will have to take strong countermeasures to defend our national sovereignty, security and development interests if the US insists on making the wrong decisions,” the statement said, urging the US to “stop interfering.”

The war of words is unlikely to give rise to any concrete actions. Existing legislation (the 1992 Hong Kong Policy Act) already gives the US president the authority to end the special trading status that Hong Kong enjoys with the United States. The Senate bill, which almost certainly will be passed by the House of Representatives as well, adds nothing to presidential powers already in place.

Veteran China observer Willy Lam, a longstanding critic of the Chinese regime, told Bloomberg News today that the United States is unlikely to tamper with the Hong Kong trading relationship. That would blow up trade negotiations with China and leave the two countries to fight a prolonged and mutually injurious trade war. That is why Beijing will issue “very high-sounding, rhetorical responses” but won’t take any specific measures against US interests. Lam added, “The Chinese will, of course, cry foul, but the real reaction may not be that severe. They will watch the situation and make a judgment later.”

Hong Kong police evicted all but a handful of the demonstrators who occupied Hong Kong’s Polytechnic University, allowing more than 1,000 of them to leave. According to news agencies, the police arrested protesters over the age of 18, but released them as if they were minors, many directly to parents gathered outside the university.

China has no intention of repeating the 1989 Tiananmen Square catastrophe, which scarred Chinese politics for a decade. Although People’s Liberation Army soldiers donned jogging shorts and appeared on the streets of Hong Kong to clear debris left by the demonstrations, the PLA is entirely unsuited to urban counterinsurgency. Hong Kong’s police gradually are regaining control of the city as large-scale arrests and exhaustion wear out the demonstrators.

The Senate bill is unlikely to have any bearing on the outcome of US-China trade negotiations that remain underway, as President Donald Trump told reporters today in an impromptu news conference. US stocks fell today after Reuters quoted unnamed sources close to the Trump Administration saying that a partial trade deal might not be concluded before the end of the year. As a matter of self-interest, though, Washington and Beijing are likely to come to some kind of compromise before the next (and more damaging) round of US tariffs is scheduled to go into effect in mid-December.

The Trump Administration wants a deal, however. The New York Federal Reserve now forecasts annualized GDP growth of just 0.4% during the fourth quarter while the Atlanta Federal Reserve forecasts just 0.3% growth, after weaker-than-expected reports this week on US retail sales and industrial production. The US has been in a manufacturing recession during the first three quarters of 2019, and overall growth may fall to near zero in the final quarter. That’s not the kind of economy that Trump wants as he goes into the 2020 presidential campaign year.

China meanwhile would like to defuse the trade war. Although the direct effects of US tariffs are limited to somewhere between 0.5% and 1.0% of GDP growth, China does not want the additional burden of employment in selected manufacturing sectors while it tries to maneuver through a thicket of domestic economic issues. Chinese officials with whom I spoke recently think that the trade war accounts for about a third of China’s growth slowdown. The Chinese government, they report, is more concerned about imbalances in the housing market and inefficiencies among the state-owned enterprises. But the trade war complicates Beijing’s attempts to address structural problems, and the Chinese government is eager to defuse the situation.