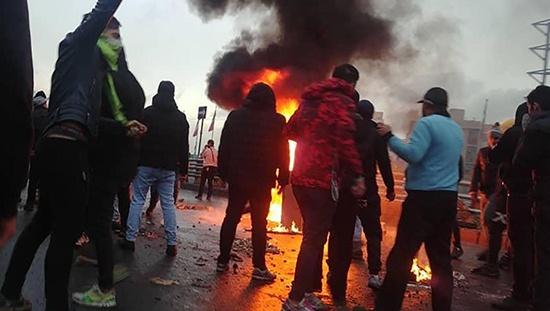 Amnesty International said on Nov. 19 that more than 100 protestors had been killed in 21 cities in Iran during unrest that broke out over a rise in fuel prices.

Snipers have shot into crowds of protestors from rooftops and, in one case, from a helicopter, Amnesty said.

The anti-government protests began on Nov. 15 after fuel price rises of at least 50 percent were announced.

An Iranian official said they had subsided on Nov. 19, a day after the Revolutionary Guards warned of “decisive” action if they did not cease.

The London-based Amnesty International said that at least 106 protesters in 21 cities had been killed, according to credible reports from witnesses, verified videos and information from human rights activists.

The reports “reveal a harrowing pattern of unlawful killings by Iranian security forces, which have used excessive and lethal force to crush largely peaceful protests,” it said.

Intelligence and security forces did not return the bodies to their families and forced others to bury bodies quickly without an independent autopsy, Amnesty said.

But social media videos posted in defiance of an internet block showed protests continued in several cities on Nov. 17 night and a heavy presence of security forces in streets. The images posted on social media could not be verified by Reuters.

About 1,000 demonstrators have been arrested, authorities said.

Members of the security forces and police have also been killed in the protests. Three were stabbed to death near Tehran, the semi-official ISNA news agency reported on Nov. 18.

Hundreds of young and working-class Iranians have expressed their anger at squeezed living standards, state corruption and a deepening gap between rich and poor.

Social media footage has shown protesters burning pictures of senior officials and calling on clerical rulers to step down, as well as clashes between security forces and protesters.

State television said funerals will be held for security guards killed in the protests, adding that thousands of Iranians had rallied in several cities to condemn the unrest.

The U.N. human rights office said it had received reports that dozens of people had been killed. It voiced concern about the security forces’ use of live ammunition and urged authorities to rein in its use of force to disperse protests.

“It is clearly very significant, a very alarming situation and widespread across the country,” U.N. human rights spokesman Rupert Colville said in Geneva.

On Nov. 17, the powerful Revolutionary Guards warned of “decisive” action if the protests went on. The Guards and their affiliated Basij militia quelled unrest in late 2017 in which at least 22 people were killed.

Frustration has grown over a sharp currency devaluation and rises in prices of bread, rice and other staples since Washington began to apply pressure on Iran to make nuclear and security concessions.

The government said the price rises were intended to raise around $2.55 billion a year for extra subsidies to 18 million families struggling on low incomes.