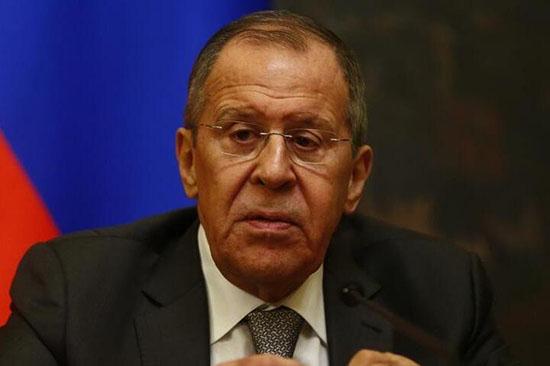 Russian Foreign Minister Sergey Lavrov vowed on Nov. 20 to complete the obligations, undertaken by Moscow under the Russian-Turkish memorandum on Syria.

Speaking at a news conference in Moscow, following the meeting with his Bahraini counterpart Khalid bin Ahmed al Khalifa, Lavrov commented on statements by the Turkish top officials on Russia‘s failure to comply with the deal, sealed by the presidents of the two countries in Sochi on Oct. 22.

Withdrawal of the YPG/PKK terrorists is almost complete, and if there are still some “tiny areas” left, Russia will accomplish its work “till the end,” he said.

Alexey Yerkhov, Russian ambassador in Ankara, had contact with the Turkish government, during which Russian diplomat was reassured that it was “a misunderstanding,” he added.

“Yesterday (Nov. 19), after the Defense Ministry made this statement in response to Ankara’s allegations of non-compliance with the Sochi agreements, there was a contact between representatives of the Turkish government and our ambassador, during which our ambassador was assured that it was a misunderstanding, that no one in Ankara questioned the work that Russia has done. Neither [Turkish Foreign Minister] Mr. Çavuşoğlu, my colleague and friend, nor [Turkish Presidential Spokesman] Mr. Kalın spoke about any resumption of Operation Peace Spring. That, in general, it was, as I said, a misunderstanding,” Lavrov said.

On Monday, Çavuşoğlu said the U.S. and Russia have not yet fulfilled the agreements signed with Ankara on northern Syria. He also added that Turkey would do everything necessary to achieve the results in preventing a terrorist threat. The position was supported by Kalın, who called on Moscow and Washington to accomplish the agreements with Turkey on Syria.

Lavrov confirmed Moscow had noticed that after the U.S. announcement to stay in Syria to defend the oil fields, the SDF — another name used by the terrorist YPG/PKK — leadership returned to their separatist pursuits, counting on Washington’s help.

“Apparently, someone in the leadership of the SDF decided to stake on the fact that the Americans will constantly support them. It would be a wrong choice. I believe that in the interests of the Kurds, in the interests of ensuring the rights of the Kurds, there is no alternative but to take a course of dialogue with the legitimate authorities of the Syrian Arab Republic,” the minister said, adding that this could also contribute to ease Ankara’s concerns over the security on the Turkish-Syrian border.

The YPG, the PKK’s Syrian offshoot, is the main force that constitutes the SDF. U.S. reliance on the YPG and SDF in the anti-Daesh/ISIS fight has angered Ankara and strained relations.