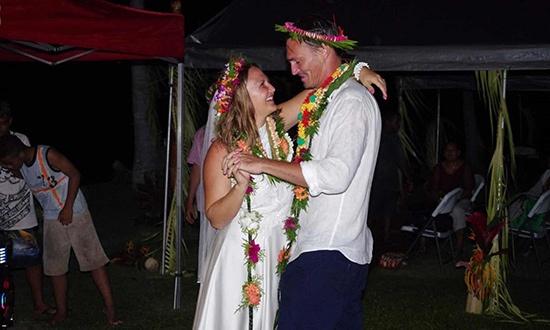 Rachelle Bergeron was working to prosecute labour traffickers, paedophiles and abusers when she was gunned down

At about 6.15 on the night of 14 October, Rachelle Bergeron put her dog in the car, drove out to one of the places she liked to jog, and went for a run.

It was the usual nightly routine for 33-year-old Bergeron, who had moved from the US to Yap, a state in the Federated States of Micronesia (FSM) in the north Pacific, in 2015.

In the four years she spent on the island, it had become home, with Bergeron becoming the acting attorney general, meeting and marrying a German pilot who had spent more than a decade on the island, and becoming a key part of the small and tight-knit community.

Though her work meant Bergeron dealt with dangerous people, Yap, which has a population of 11,000, is sleepy and largely peaceful. Guns are tightly regulated in Yap, and gun violence very uncommon.

But an hour after she set off on her run, her husband, Simon Hammerling, says he started to get worried. At the time he was with Deesha, a 12-year-old girl the couple were planning to adopt.

“It started to get dark outside and started to get rainy a little bit … and in my head I was starting to think, why is Rachelle not back yet? Then I heard her car drive into our yard at about 7.15-ish,” he says.

Then, as Bergeron was letting the dog out of the back of the car, she was shot from behind. Three shots were fired – police would later determine from a shotgun – one hitting her shoulder, one her upper leg, and one hitting and killing her dog.

From inside the house, Hammerling and Deesha heard the gunshots.

Hammerling ran outside. There was no sign of the shooter. Bergeron was on the ground, the dog was clearly dead.

“Initially, I saw the dead dog and for a moment I thought, well that’s a relief, they killed her dog and Rachelle is in shock, or whatever. I couldn’t think straight,” Hammerling says.

When he reached Bergeron and saw the extent of her injuries, Hammerling called the police, and his friend and colleague Amos Collins, who had a flatbed truck, which Hammerling knew he would need to get Bergeron to the hospital.

“I arrived at the same time as the first officer on the scene,” says Collins. “Rachelle was unconscious on the ground next to the house. Simon’s neighbour, who is a nurse, was there. We immediately picked up her body and loaded her in my flatbed and drove to the hospital.”

Hammerling performed CPR on Bergeron throughout the drive to the hospital. At the hospital, he stood waiting outside while the doctors, many of whom he and Bergeron knew personally, worked to save her. His friends gathered around him and they prayed.

“I really thought everything was going to be OK,” Hammerling says. “When they called me back in I thought they were going to say she’s stabilised … But then the doctor shook his head and I couldn’t believe it.”

The Yap Memorial State hospital medical chief of staff, Dr Bodunrin Mandela, said that though Bergeron was rushed to the hospital, her wounds were fatal, with shrapnel piercing her body in 21 places.

“She has multiple gunshot injuries, she was dead on arrival, she lost a lot of blood, it was too late already,” Mandela told Radio Australia.

Based on the exit wounds, Mandela said Bergeron was clearly shot at close range, estimating that the shooter was within three metres of her when the shots were fired.

Two men have since been charged over the shooting. There have been reports that Bergeron might have been targeted for her work as a prosecutor trying to disrupt human trafficking rings in Yap.

Bergeron was raised in Waukesha, Wisconsin, the oldest of four children. After law school at the University of Florida, she built her career on fighting for survivors of human trafficking, working with the International Justice Mission, a US-based human rights advocacy group, in Washington DC and India, and later with Sanctuary for Families, a not-for-profit that provides support to victims of domestic violence and sex trafficking.

We named her Rachelle, which meant ‘little lamb’, we should’ve come up with something like ‘fierce tiger’

At her memorial service in Wisconsin, her father, Thomas, said: “We named her Rachelle, which meant ‘little lamb’. Turns out it wasn’t quite accurate, we should’ve come up with something like fierce tiger.”

He told the story of how, while she was working in India, Bergeron had been stopped by a vendor in a market who had boasted of how his textiles were handmade by nine-year-old children. Thinking he was talking to an interested shopper and not a lawyer specialising in human trafficking, he gave Bergeron information about the factory where the children were working, which her organisation then investigated.

Bergeron was planning on moving to Wyoming in 2020 with Hammerling and Deesha for a new job. Her father told a local Wisconsin paper that she had discussed her plans to move back to the United States over the phone with him the night before she was killed. But they were planning to spend one last Christmas in Yap before the move.

Rachelle Bergeron had spent the last four years living in Yap, in the Federated States of Micronesia. She became acting attorney general for the island.

Bergeron’s death has rocked the small and tight-knit community of Yap. At a memorial service, which was attended by more than 300 people, the island’s governor, Henry Falan, said: “It is with great sadness that we have come to this day, it is very upsetting on so many levels, first the senseless taking of a human life … a selfless woman, is so tragic beyond words. Second, it is beyond my ability to comprehend, given the traditionally peaceful nature of culture of the Yapese people.”

Laura Tiningdad, from the Yap Womens’ Association, with which Bergeron worked closely, said the death “broke my heart” and that the association would name the women’s centre after her in name of all the work she did with women in Yap.

‘Wanton indifference to the value of human life’

The FBI sent a team to aid FSM police in their investigations. Two weeks after the shooting, Francis Choay Buchun and Anthony Rutun Teteeth were charged with Bergeron’s murder.

Yap is small enough that Hammerling knew both men – Buchun was an acquaintance, and Hammerling said he would have spoken to him a few times. He only knew Teteeth by sight.

Complaints filed before the Yap State supreme court allege that Teteeth, who worked for a local business, and Buchun, who worked for Yap’s Aircraft Rescue and Fire Fighting Facility, spent more than a month planning Bergeron’s murder and arranging to obtain weapons and ammunition illegally.

Court documents allege that on the night of the murder, Buchun provided Teteeth with the murder weapon and drove him to Bergeron’s home, where Teteeth “recklessly and with wanton indifference to the value of human life fired a shotgun three times towards Ms Rachelle Bergeron”.

Some believe the men targeted Bergeron because of her work on human trafficking.

While Hammerling says Bergeron did not talk about specifics of her cases with him, one of Bergeron’s former co-workers, who did not want to be named, told the Guardian Bergeron worked on cases on domestic abuse, labor trafficking, age consent, and gender-related violence in Yap.

Rachelle Bergeron with one of the couple’s dogs, Nubs, in Yap. Nubs was not the dog that was killed in the shooting.

Robert B. LaManna, the assistant attorney general of FSM, says they have not ruled out the fact that other people might have been involved in Bergeron’s death, saying it is “certainly possible, and is something we are looking into.”

“We don’t have a clear idea of motive at this stage,” says LaManna. “It’s possible it was retaliation against Rachelle’s work as a prosecutor. It’s true that Choay [Buchun] had a case pending against him, and that Rachelle was going to prosecute that case.”

Hammerling says Bergeron was concerned about the release of Buchun on bail in September.

“She was concerned,” he says. “She said that guy was dangerous.”

“She would be getting threats every once in a while. She did say that some of these guys she’s trying to put away are dangerous. But I don’t know if Rachelle ever really felt like she was in a life-threatening situation.

Hammerling, speaking to the Guardian just days after Bergeron’s funeral, says he thinks he will go back to Germany for a while, while Deesha stays in Wisconsin with Bergeron’s parents. He does not blame Yap for his wife’s death.

“Nobody in Yap, while I was there, has ever shot somebody,” said Hammerling. “I don’t even know the last time somebody shot a person. They like guns to shoot bats and stuff and just to show off.”

Bergeron’s body was flown back to the US for an autopsy and burial on 2 November in Brookfield, Wisconsin.