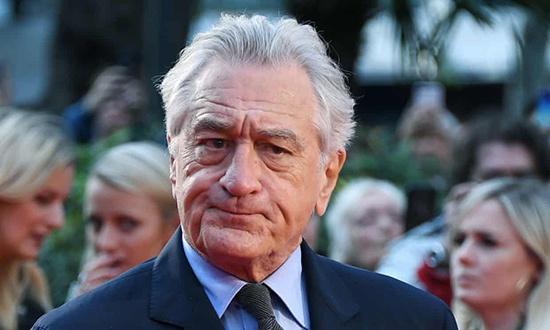 The actor has predicted the president might start a war to get a third term. It’s far from the first time De Niro has made his views clear

Robert De Niro has a dire prediction about the presidency of Donald Trump. Were the president elected to a second term, it wouldn’t surprise De Niro if Trump started a war to keep himself in office for a third term, he said in an interview with the Daily Beast this week.

The harsh words for the president are nothing new from the actor: he’s been one of the more outspoken anti-Trump critics since the 2016 campaign began. Here are some of his sharpest rebukes.

A few months before the election in 2016, De Niro joined a chorus of celebrities pointing to the absurdity of Trump’s campaign.

“What he’s been saying is really totally crazy, ridiculous … he is totally nuts,” he told an audience in Sarajevo marking the 40th anniversary of his film Taxi Driver.

“I don’t know, it’s crazy that people like Donald Trump … He shouldn’t even be where he is, so God help us,” he said.

As part of a campaign urging people to vote in the 2016 election, De Niro made what would prove to be some of his most withering comments about Trump in September of that year. “He’s so blatantly stupid. He’s a punk. He’s a dog. He’s a pig. A con. A bullshit artist. A mutt who doesn’t know what he’s talking about,” he said, among many other things, in a video.

“He’s president now … half the country is horrified, many parts of the world are, and we’re gonna see how he does. That’s it … I give the benefit of the doubt that’s he going to try his best to do the right thing,” he said in an interview.

His openness to the administration would not last long.

‘Enemy of the arts’

In May of 2017, De Niro took aim at Trump’s immigration policies, telling a crowd at a benefit in New York that they might prevent future artists and immigrants like Charlie Chaplin, being honored that night, from entering the country.

In a speech at the Brown University commencement, also in May of that year, De Niro contrasted the America of the past with the Trump era.

“When you started school, the country was an inspiring, uplifting drama,” he said. “You are graduating into a tragic, dumbass comedy. My advice is to lock the [university’s] Van Wickle gates and stay here.”

In June of 2018, De Niro earned a standing ovation at the Tony Awards for cursing out the president. “I’m gonna say one thing. Fuck Trump,” he exclaimed.

“It’s no longer down with Trump. It’s fuck Trump,” he said as the crowd rose to their feet.

The president responded not long after on Twitter, suggesting the actor was brain-damaged.

“Robert De Niro, a very Low IQ individual, has received too many shots to the head by real boxers in movies,” Trump tweeted. “I watched him last night and truly believe he may be ‘punch-drunk’.”

Speaking to the Guardian in January of this year, De Niro said he was wrong to give Trump the benefit of the doubt, and that it was clear that he was a “real racist” and a “white supremacist”.

He also compared him to some of history’s worst fascists.

“If he had his way, we’d wind up in a very bad state in this country. I mean, the way I understand it, they laughed at Hitler. They all look funny. Hitler looked funny, Mussolini looked funny and other dictators and despots look funny.”

He also compared him, unfavorably, to mob bosses, after Trump had recently called his own longtime lawyer Michael Cohen a “rat”.

“I mean, a mob boss calls people ‘a rat’. That means you lied and somebody snitched on you, so you did commit the crime. So that’s interesting, and he makes mobsters look bad because there are mobsters who will shake your hand and keep their word. He can’t even do that.”

He reiterated that Trump had less honor than a common criminal.

“Even gangsters have morals and they have ethics. They have a code, and you know when you give somebody your word, it’s your word, because it’s all you have is your word. This guy, he doesn’t even know what that means.”

‘He should not be president’

In September of this year, De Niro was characteristically blunt in speaking about Trump, saying that he “should not be president, period”.

This October, he once again returned to the gangster motif, calling Trump a “gangster president” at the premier of a film in London.

“He’s going to be history at one point, though he’d love to be president for life,” De Niro told the Daily Beast this week. “He jokes about it. I think that if he became president for a second term he’d try to have a third term, and let smarter people manipulate it into getting us into some kind of altercation: a war.”

“Trump joked about being ‘president for life’ with [Chinese president Xi Jinping] and so on. He’ll pardon anybody, he’ll do anything. The day after he was elected, I went on a TV show and said I’d give him the benefit of the doubt and say that I hope he won’t be as bad as I think he will be, but he’s turned out to be a lot worse.”