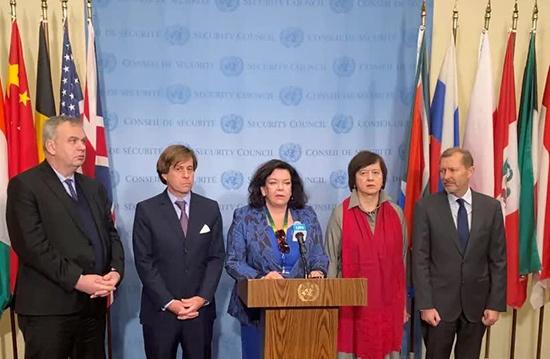 The UNSC has held that the Israeli activity over the pre-1967 lines is illegal under international law. This includes activity in east Jerusalem, the Golan Heights and the West Bank.

By TOVAH LAZAROFF  – https://www.jpost.com
The Trump Administration stood alone at the United Nations Security Council, as 14 nations out of the 15-member body slammed its new policy that holds West Bank settlements are legal.

“To us, it is obvious that this [new US policy] will escalate the already tense situation in Palestinian-Israeli settlement, Russian Chargé d’Affaires Dmitry Polyanskiy told the UNSC at its monthly meeting on the Israeli-Palestinian conflict,” the council said.

After the meeting Kuwait told reporters the US had scuttled efforts to have the UNSC issued a statement confirming the illegality of the settlements.

“We wanted a short two paragraphs emphasizing that settlement activity is illegal, undermines the two-state solution and violates Security Council resolution 2334,” its envoy said. But “one delegation objected to that.”

Prior to the meeting, the ambassadors of the five European Union members of the UNSC – the United Kingdom, France, Poland, Germany and Belgium – issued a joint statement against the US declaration.

“All settlement activity is illegal under international law,” the ambassadors said as they read from the statement. The settlements erode “the viability of the two-state solution and the prospects for a lasting peace.”

They called “on Israel to end all settlement activity” adding that they were concerned by Israeli calls for the “possible annexation of areas in the West Bank.”

The UNSC has held that the Israeli activity over the pre-1967 lines is illegal under international law. This includes activity in east Jerusalem, the Golan Heights and the West Bank.

The UN and its Security Council have passed numerous resolutions declaring Israeli settlement activity to be illegal. In December 2016, the UNSC approved resolution 2334 that also made such a declaration. The US abstained from the vote and did not use its veto power at the Security Council to destroy the resolution. Under the Obama Administration the US held that West Bank settlement activity was illegitimate.

On Wednesday the US Deputy Ambassador Cherith Norman Chalet introduced the new US policy on West Bank settlements to the council for the first time, just two days after US Secretary of State Mike Pompeo made his dramatic announcement on the issue to reporters in Washington.

“It is the position of the United States that the establishment of Israeli civilian settlements in the West Bank is not per se inconsistent with international law,” Chalet said.

The US holds that the Israeli-Palestinian conflict can only be resolved through direct negotiations, and its new position does not prejudge “the ultimate status of the West Bank – that is for Israelis and Palestinians to decide,” she said.

She charged that the real obstacle to Israeli-Palestinian peace was the rockets launched against Israel from Gaza.

Palestinian Ambassador to the UN Riyad Mansour accused the US of attempting to sabotage any attempts to achieve peace, security and stability in the region and for the Palestinians.

“We condemn this unlawful and irresponsible declaration. We consider it to be null legally, politically, historically and morally. It has no value,” he said.

It was the latest in a series of “provocative” and “irresponsible” steps taken by the US that started with the opening of the US Embassy in Jerusalem, Mansour said. In addition, the US has attacked the definition of Palestinian refugees, ending support for UNRWA and acknowledging Israeli sovereignty on the Golan, he said.

The Palestinians are confident that the international community will firmly reject the latest declaration, as it did with other previous US declarations that violate international law, and that it will not affect the legal situation in “occupied Jerusalem,” Mansour said. Such statements won’t legalize the “colonial policies of Israel,” including their annexation policy and their illegitimate settlements, he said.

“One can’t believe that the American voice today is a voice that supports peace,” he said, adding that the US is now a “voice that incites against Palestinian people.”

He accused the US of encouraging “Israel to continue with the annexation of our land.”

“Our land is not a present that can be offered by the US to the ambitions of Netanyahu, and the blood of our people is not a currency to be [used] in Israeli elections,” Mansour said.

During the UNSC debate Danon thanked the US for its policy shift, which “clearly [rejects] the false claim and historical lie that Israeli communities in Judea and Samaria are inherently illegal under international law.”

“Judea and Samaria are inseparable parts of the Jewish people’s homeland. This is not a recent development or claim, but a historical truth that will never again be denied,” he said. “The Pavlovian response of some European countries to Secretary Pompeo’s announcement only further delays the chances of ending the conflict.

“The automatic support of some European countries for the Palestinians has resulted in a propaganda campaign that starts in New York and ends in Ramallah,” he said.

“Let me be clear – Jewish communities are not an obstacle to peace!” he said, noting Israel’s peace treaties with Egypt and Jordan prove the lengths that Israel was willing to go for peace.

In addition, Israel withdrew from Gaza in 2005 and in 2009, it agreed to a 10-month moratorium on settler housing starts, he said.

He accused opponents of the settlements of having a political agenda and wanting to predetermine the parameters of a final status solution to the Israeli-Palestinian conflict.

There are two obstacles to resolving the conflict, Danon said.

“The first is the Palestinian Authority’s incitement against Israel and the Jewish people,” he explained. “We don’t hear all members of this council saying so, because it puts blame on the PA instead of on Israel.

“The second real obstacle to peace is your attempt to determine the outcome of the negotiations before they have even started,” he said. “Too many members of the international community have a habit of trying to alter the starting point of future negotiations. Perhaps this is done out of frustration that a solution to the conflict has not yet been reached.”

Such attempts run counter to signed agreements between Israel and the PA that were internationally endorsed, he said.

Danon added that the idea that a solution to the conflict must be based on the pre-1967 lines is a new idea that did not even exist when those lines were formed in the aftermath of the War of Independence in 1948.

“The Jordanian-Israeli General Armistice Agreement of April 1949 explicitly states that the demarcation line was established for military purposes only, and I quote from the agreement: ‘without prejudice to future territorial settlements or boundaries,’” he said. “That was signed in 1949 between us and the Jordanians. Adding such a precondition is an attempt to decide the outcome of the negotiations before they have started.”