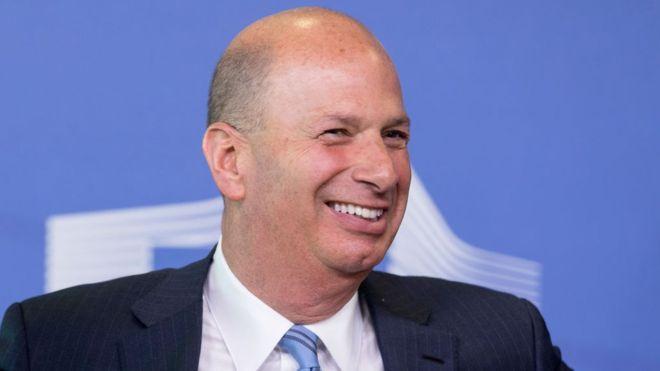 David Smith in Washington –  The  Guardian

A star witness at the impeachment inquiry has delivered a devastating blow to Donald Trump, testifying about the existence of a quid pro quo with Ukraine and insisting: “We followed the president’s orders.”

Gordon Sondland, the US ambassador to the European Union, stunned Washington with bombshell evidence that blew a hole in the White House’s defences, implicated numerous senior officials and left the US president facing probable impeachment.

Before a rapt congressional committee and a TV audience of millions, Sondland told how Trump’s personal lawyer, Rudy Giuliani, sought to condition an Oval Office meeting with the new Ukrainian president, Volodymyr Zelenskiy, in exchange for politically motivated investigations of Trump’s rivals.

“I know that members of this committee have frequently framed these complicated issues in the form of a simple question: Was there a ‘quid pro quo?’” the ambassador said. “As I testified previously, with regard to the requested White House call and White House meeting, the answer is yes.”

Sondland, a wealthy hotelier and Trump donor, has been described as one of the so-called “three amigos” the administration used to bypass usual state department channels to Ukraine. He had been billed as the witness who most alarmed officials at the White House – fears that rapidly proved to be well founded.

Wearing a blue suit, white shirt and red patterned tie, Sondland took his seat in a cavernous, ornate committee room on Capitol Hill just after 9am and offered the most explosive testimony of the inquiry so far.

He asserted that an Oval Office meeting with Trump was dependent on Ukraine announcing investigations into Burisma, a gas company linked to the son of former vice-president Joe Biden, and a widely discredited conspiracy theory that Ukraine planted evidence on a server of the Democratic party to show Russia interfered in the 2016 election.

“Mr Giuliani’s requests were a quid pro quo for arranging a White House visit for President Zelenskiy,” Sondland said. “Mr Giuliani demanded that Ukraine make a public statement announcing investigations of the 2016 election/DNC server and Burisma. Mr Giuliani was expressing the desires of the president of the United States, and we knew that these investigations were important to the president.”

Sondland acknowledged he never heard directly from Trump that the security assistance hinged on an announcement of investigations, adding that the conclusion was his “own personal guess”. But by early September, he added, “it was abundantly clear to everyone that there was a link”.

And he concluded the optics of Zelenskiy announcing investigations were more important than them actually taking place. “He didn’t actually have to do them, as I understood it.”

The 19-page opening statement was a potential death blow to Trump’s fight against impeachment, demolishing talking points made by House Republicans and conservative media. The president himself, however, attempted to downplay its significance, noting that Sondland testified about a conversation in which Trump had denied to him there was a quid pro quo.

“I said to the ambassador in response, I want nothing,” Trump told reporters, reading from notes scrawled with a Sharpie in big capital letters before boarding the Marine One helicopter at the White House. “I want nothing. I want no quid pro quo. Tell Zelenskiy, President Zelenskiy to do the right thing.”

Trump’s impeachment by the Democratic-controlled House would put him on trial in the Senate, but a Republican majority there seems likely to acquit him and keep him in office.

Sondland’s evidence also raises questions over the future of Giuliani, the former mayor of New York, who pushed hard for the investigations in Ukraine despite having no official diplomatic role. Giuliani, who had business interests of his own in Ukraine, has refused to testify or hand over documents to the impeachment investigation despite a subpoena.

Trump told him to “talk with Rudy” about Ukraine, Sondland recalled, and he reluctantly agreed, even though it did not seem appropriate to go through the president’s personal lawyer.

“We did not want to work with Mr Giuliani. Simply put, we played the hand we were dealt … So we followed the president’s orders.”

The Brussels-based ambassador, who has no previous foreign policy experience, defended his own conduct and said he acted in good faith. He also said he was always opposed to the suspension of aid to Ukraine because of the country’s need to fight against Russian aggression.

Sondland adamantly denied involvement in “some irregular or rogue diplomacy” that departed from White House policy, claiming that he kept state department and National Security Council officials informed of his activities.

“Everyone was in the loop,” Sondland told the hearing. “It was no secret.”

This included the vice-president, Mike Pence, the secretary of state, Mike Pompeo, and acting chief of staff Mick Mulvaney. There was a swift response from Pence’s office. Marc Short, his chief of staff, said: “The vice-president never had a conversation with Gordon Sondland about investigating the Bidens, Burisma or the conditional release of financial aid to Ukraine based upon potential investigations.”

Sondland also testified about a phone call he had with Trump from a restaurant in Kyiv. Previous witnesses have testified they overheard Trump asking, “So he’s going to do the investigation?” and Sondland replying, “He’s going to do it” because Zelenskiy will “do anything you ask him to”.

On Wednesday, Sondland told the committee: “While I cannot remember the precise details – again, the White House has not allowed me to see any readouts of that call – the July 26 call did not strike me as significant at the time.

“Actually, I would have been more surprised if President Trump had not mentioned investigations … However, I have no recollection of discussing Vice-President Biden or his son on that call or after the call ended.”

Asked by Democratic counsel Daniel Goldman whether he told Trump that Zelenskiy “loves your ass”, as has been relayed to the inquiry, Sondland replied in a moment of levity: “Sounds like something I would say. That’s how President Trump and I communicate. A lot of four-letter words. In this case a three-letter.”

Sondland appeared relaxed despite the high stakes, cracking jokes at various moments. Told that another witness called him “the Gordon problem”, Sondland shot back: “That’s what my wife calls me.”

But there was tense moments too. Sondland had already changed his closed-door testimony to admit the existence of a quid pro quo. When he told Congressman Sean Maloney of New York that he resented his tone, Maloney snapped back: “We appreciate your candor, but let’s be really clear what it took to get it out of you.”

Despite the onslaught, Republicans stood firm in defence of Trump. Devin Nunes, the top Republican on the House intelligence committee, dismissed “supposed bombshells” in Sondland’s testimony and repeated his complaint that Democrats refuse to call Biden’s son, Hunter, as a witness. “In their mania to attack the president, no conspiracy theory is too outlandish for the Democrats,” he said.

But their coordinated effort did little to stem the bleeding. Democrat Adam Schiff, the committee chairman, told Sondland, who looked restlessly around the room: “This is a seminal moment in our investigation and the evidence you have brought forward is deeply significant and troubling.”

George Conway, a lawyer and Trump critic married to White House counselor Kellyanne Conway, drew comparison with a crucial figure in the Watergate hearings that led to Richard Nixon’s resignation. “This is a John Dean moment,” he wrote. “It will live forever in American political history.”