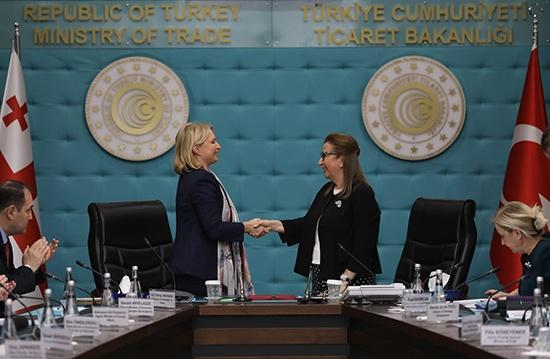 Turkey and Georgia have agreed to work on a simplified customs line which could pave the way for ending delays in transportation.

“I offered to the minister to work on a simplified customs line cooperation, and she agreed,” Pekcan said.

She added: “Our goal is to prevent loss of time and money due to delays in shipping between our two countries.”

For her part, Turnava said the meeting was held after a 14-year break.

Underlining that Turkey was one of Georgia’s biggest trade partners, she noted that Tbilisi was ready to implement all kinds of assistance and incentives for Turkish investors.

Bilateral trade volume stood at $3.45 billion with Turkey exporting $2.06 billion worth of goods to Georgia and its imports from this country amounting to $1.4 billion in 2011.

Turkey shipped $1.3 billion worth of goods to Georgia while its imports from the country amounted to $234 million in 2018.

In January-September this year, Turkey’s exports to Georgia stood at nearly $1 billion, and its imports were $179 million.

Turkey mainly sells iron and steel pipes as well as medicine to Georgia while its main import items include chemical fertilizers, iron and knitted fabric products.

There are more than 500 Turkish companies doing business in Georgia and providing jobs to some 20,000 people.

Turkish developers have completed nearly 197 projects worth over $3.5 billion in Georgia.