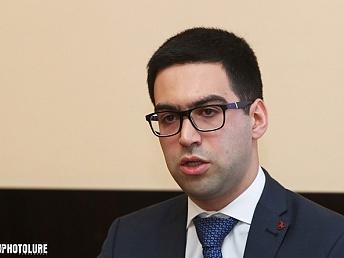 YEREVAN, November 22. /ARKA/. The government of Armenia has approved today a set of amendments to the Criminal Code and the Law on the Constitutional Court, which according to the Minister of Justice Rustam Badasyan, are another step towards reforming the justice system.

“The main goal of the proposed changes is to provide effective and complete grounds for verification of court judges’ property, professionalism, respect for human rights, impartiality, the possibility of making decisions regardless of certain ties and external influences (vetting),’ the minister said.

According to Badasyan, the vetting should not be carried out by using temporary tools and should not be temporary. The process will be permanent and the judges, after the adoption of the changes, will constantly go through the vetting process. He said no special body will be created to that end; the Supreme Judicial Council will be responsible for handling the issue.

The minister emphasized that under the proposed changes liability for committing a violation is possible only if it is committed intentionally or is of malicious negligence nature.

A violation of international obligations undertaken by Armenia in the field of protecting human rights may become a basis for initiating disciplinary proceedings against judges. The list of disciplinary fines has been expanded to include moderate penalties.

In addition, the Commission on the Prevention of Corruption is given the right to initiate disciplinary proceedings if the judges’ property and income declarations contain wrong information.

Also the Disciplinary Committee consisting solely of judges elected for five years will be replaced by the Commission on Ethics and Discipline, whose members are to be elected for a term of two years. The latter is to include not only judges, but also lawyers proposed by public organizations.

The minister also noted that in the future it will be necessary to carry out constitutional changes to provide for an opportunity to appeal against decisions on disciplinary proceedings in view of the fact that under current law decisions of the Supreme Judicial Council are final and not subject to appeal.

He also said that when hiring judges, a psychological test will be carried out additionally, and the age limit will be reduced from 28 years to 25 years.

The minister said the Law On the Constitutional Court has been amended, in particular, regarding the issue of submitting a declaration of property and income to the Commission on the Prevention of Corruption. In order to initiate disciplinary proceedings, the Commission should appeal to the National Assembly, which, in turn, may appeal to the Constitutional Court to terminate the powers of a judge on the basis of a real disciplinary violation.

In order to ensure effective fight against corruption, the changes propose to expand the concept of “family”, as well as introduce a mechanism for the mandatory submission of situational declarations. Responsibility is provided for failure to fulfill these obligations. At the same time, the changes offer the possibility to appeal the decision on the requirement to provide a situational declaration.