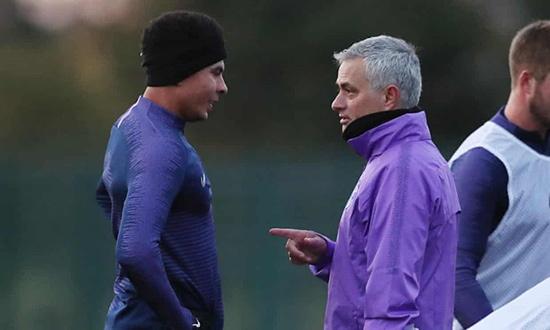 José Mourinho had a question for Dele Alli, the Spurs midfielder, who has long since mislaid his best form. “I asked him if he was Dele or Dele’s brother,” Mourinho says. “He told me he was Dele. ‘OK,’ I said. ‘Play like Dele.’”

It was a classic piece of Mourinho kidology, the kind of move he has pulled on numerous occasions and with which he seeks to establish a connection; to motivate. It is so easy to picture the scene with Alli from Wednesday – Mourinho’s first day as Spurs manager. The lacerating, direct delivery; the mischief behind the eyes. The question – and this talks to Mourinho’s latest adventure in England as a whole – is whether it still works?

Mourinho’s new club, the third he has managed in the Premier League after Chelsea (twice) and Manchester United, are at a low ebb, sitting 14th in the Premier League. A little under six months ago they were contesting the Champions League final but everything has unravelled at pace and, never mind Alli, it is difficult to say that any key player has touched his top level this season. It is the reason why Mauricio Pochettino, the most successful manager of Daniel Levy’s near 19-year chairmanship, is now out of work and why Mourinho has been tasked with finding the right buttons to press to reboot the players.

Alli is one of the greatest challenges and, on the eve of Saturday’s trip to West Ham, Mourinho found himself discussing an old tweet that was supposed to have come from the player’s account. It is important to say the tweet was a fake but it led Mourinho into a story about his appreciation for player passion, or what Pochettino would call Alli’s “naughtiness”. The fake tweet had Alli criticising Mourinho and saying he was glad he would never have to work with him.

“When I changed from União de Leiria to Porto mid-season [in 2002], I’d played against Porto a couple of months earlier,” Mourinho says. “One of the Porto players – and I have no problems saying his name because he laughs about this all the time – was Deco. For 90 minutes I insulted him and he insulted me. Big, big insults. Then I walked into the Porto dressing room and he had his head down on his hands. I went there and we talked. If it was true about Dele [and the tweet], I would be happy.”

Mourinho was in richly entertaining form. Asked how he felt about stepping into a starring role for the Amazon Prime documentary that is being shot at Spurs, he said nothing and, instead, fished into his pocket to pull out a mic pack. Then he delivered one of the all-time great eye rolls. Pochettino had not been happy about the intrusive presence of the film crew.

Good José is great to be around and the hope is he will remain in the building. The fear, of course, is that Bad José will take over. It always tends to end in tears with Mourinho but can Spurs get a bounce out of him and some short- to medium-term cheer?

Mourinho’s message was that it would be a process for him – on a micro level with Alli, for example, bringing “the real Dele back,” and, more broadly, with the implementation of a playing style that will seek to build on Pochettino’s foundations.

“One thing is the end product, another is the moment you start,” Mourinho says. “I’m going to make some tactical ticks but not incredible changes. I’m not going to try to be Einstein. I want to play offensive football but winning matches, not offensive football and don’t win a match for 10 or 11 months. But yes, attacking football. You are not going to see Harry Kane playing left-back.”

Mourinho expressed a happiness at the players he had inherited and it is no secret that he has previously tried to sign a number of them, including Danny Rose, Eric Dier and Toby Alderweireld, when he was at United.

“I am not telling about the ones recently – I go further back to Lucas [Moura] when he was at São Paulo, before he went to Paris Saint-Germain,” Mourinho says. “I tried to get him to Real Madrid. I met his mum, his dad, his agent. But PSG came into the picture. There were others I didn’t even think about buying because we know it’s impossible. So you just admire the player, wish to have him but forget about it.”

Kane fitted into this category. “When you try to buy Kane it’s just an impossible mission,” Mourinho says. “He’s one of the best strikers in the world. He just needs his team to bring him or to go with him to the next level. And what is the next level? Titles. He needs to win; with us, with England.”

Mourinho was asked how important it was to keep Kane at Spurs. “This is not about me, this is about Mr Levy and the club,” Mourinho says. “He has a vision and to keep the best players is part of that. He told me he does not sell players when the manager doesn’t want to sell. It’s great to have him on my side. I used to be in clubs that feared him.”

Mourinho said several times that he did not need new signings, which is just as well as there is no budget for a January overhaul. Any mid-season adjustments would have to be funded by sales. He completed the charm offensive with a line about wanting to “do a Mauricio” and stay at Spurs for five and a half years, making them his last club in England.

And so to the West Ham game. “I know if I do something wrong, the pundits will kill me,” Mourinho says, with a smile. His stint as one of their number was always likely to be temporary and now he is back where he most wants to be. Spurs are already a different club.