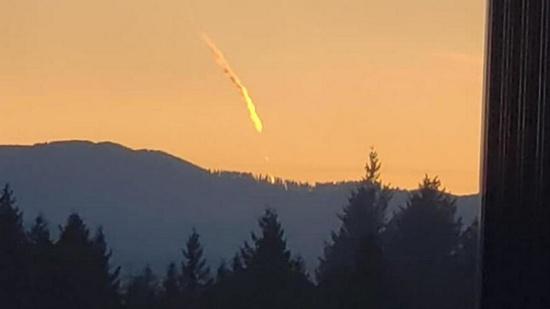 Photos of what looks like a fireball falling in Polk County, Oregon, has sparked a frantic search amid reports of a plane crash. Nothing was found, however and police now believe it was a meteor. Netizens have their own ideas.

It all started on Thursday evening, when the Polk County Sheriff’s Office received a 911 call alerting them about a possible plane crash in the area southwest of Polk County. The caller then sent a couple of photos that show what resembles a white streak an airplane might leave behind when going down.

Police rushed to locate the site of the reported crash, sending a helicopter to scan the wooded area in the hope of recovering some wreckage. However, the extensive search has turned up nothing, leaving police dumbfounded over what actually just whizzed above the rural area.

In an update on Friday, police said that they had “utilized all available aviation tracking systems and no planes have been lost.” Short on answers, police have eventually come to the conclusion that the mysterious “fireball” was likely a meteor.

“We can say with confidence that it was not a plane crash. So, we think it was some type of natural event,” Polk County Sheriff Deputy Lt. Dustin Newman said, as cited by KATU News. Meanwhile, Polk County Sheriff Mark Garton told Newsweek that police “really believe it was a meteor.” Garton pointed out that the event coincided with a “somewhat rare meteor shower” that was registered in the area. However, Sgt. Mark Robertson with Polk County police later told the Daily Mail that they “are not 100 percent sure.”

A local resident, who took the photos and sent them to police, came forward casting doubt on the police version of the events.

“I’ve seen meteors before, and they’re bright white and in five seconds they’re gone. That one lasted way too long,” Richard Romano told KATU News. Romano said he was about to go check his mail when he spotted a small aircraft approaching moments before the streak appeared in the sky.

“In the time it took to get over there, for me walking and checking the mail, it gave him time to get right there where I saw the fireball,” Romano noted.

Still being shrouded in mystery, the incident has sparked a wild guessing game with no shortage of theories, some more incredulous than others.

Some suggested rather mundane explanations, arguing that police mistook an airplane contrail for a “fireball.”

“That’s why it gets darker as the Sun goes lower. Why not claim that the sky is on fire because it’s red?” one commenter wrote under Polk County Sheriff’s Office post on Facebook.

However, not everybody agrees.

“Y’all need to learn what a contrail is. Water vapor WILL NOT stay warmer than the surrounding air that’s negative degrees for very long so the dissipate quickly,” Facebook user Brock Mecham noted.

Others were more creative in their attempts to explain the phenomenon.

“It’s SUPERMAN!!!!!!” a user suggested. “Most definitely baby superman falling from Krypton in his ship,” another chimed in.

Aliens passing by in their presumably invisible spacecraft was also among the top guesses.

Tesla CEO Elon Musk, whose ‘fiasco’ of a Cybertruck presentation made waves online earlier this week, was also dragged into the debate.

While police have yet to set the record straight about the incident, netizens have been watching for new developments with bated breath. “Where is the follow up on this you all just going to leave us hanging?” another person inquired.