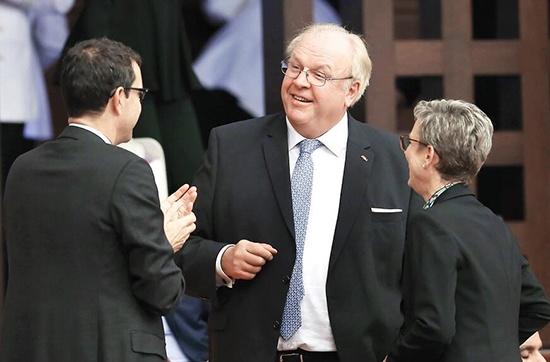 Ankara and Berlin are in discussions over a Turkish lawyer who was arrested two months ago for allegedly providing the personal data of Turkish citizens living in Europe upon the request of the German embassy.

German Ambassador in Ankara Martin Erdmann on Nov. 21 said the arrest of the lawyer who provides legal consulting services to his embassy was “not understandable.”

“This arrest is not understandable to us. For this reason, we are making intensive efforts to clarify the alleged crimes,” he said in a written statement on Nov. 21.

“Our legal adviser has provided our embassy with the usual support, which is in international terms and, in our opinion, is undeniably not forbidden. Such cooperation should be possible without hindrance,” he said.

Legal consultations are important interlocutors for the embassy in Ankara, along with other diplomatic missions, in order to clarify and better evaluate the issues related to the legislation of the country, said the ambassador.

On Sept. 18, daily Hürriyet reported that two lawyers working for EU member state embassies were arrested on allegations that they leaked information about Turkish citizens to these foreign missions.

These lawyers were accused of providing documents to Turkish national FETÖ and PKK members who “illegally” applied to get political asylum in these countries.

The lawyers, identified only by their initials Y.S. and B.D., were reportedly collecting the personal identities of these Turkish citizens living in Europe and providing this information to the embassies of some member states of the EU.

The daily claimed that the reports submitted by the lawyers were forwarded to the foreign and justice ministries and immigration departments of these European countries.

The reports submitted were used for deportations, social assistance payments, granting and canceling residence permits and deprivation of citizenship in these countries.

The lawyers were registered to the bars of Istanbul and Diyarbakır, sources told the Hürriyet Daily News on condition of anonymity.

One of the lawyers, Y.S., was contracted by the German embassy for several years for legal consulting services, sources said. He was detained in September when he traveled to Ankara to visit the German embassy.

The embassy had several discussions with the Turkish officials on the issue for the past two months. Some other staff of the EU member states are also subject to the investigation, according to the sources.