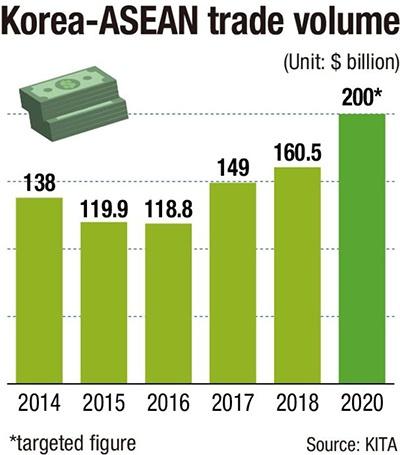 ASEAN has become the nation’s second-largest trading partner, with trade between Korea and the Southeast Asian bloc jumping twentyfold this year from 1989.

Experts said Korea should adopt a two-pronged strategy to strengthen its foothold in the region by pursuing an ASEAN-wide approach and developing strategies tailored to each country at the same time, as ASEAN member states are all different in economics, politics and culture.

According to data from the Ministry of Trade, Industry and Energy and the Korea International Trade Association (KITA), Sunday, in the first 10 months of this year, the country’s exports to ASEAN reached $80 billion.

Korea’s imports from the Southeast Asian countries reached $47.4 billion during the January-October period, indicating that Korea enjoyed a trade surplus of $32.6 billion.

The latest figures, which were released ahead of the Korea-ASEAN commemorative summit to be held from today through Wednesday, are significant as Korea’s exports to ASEAN member nations stood around $3.9 billion in 1989, with imports at $4.1 billion.

By country, Vietnam emerged as the fourth-largest export partner for Korea last year, up from 59th in 1989.

Industry officials noted that the government and business communities should cooperate more closely to put together measures to make Korea a sustainable partner for ASEAN.

“The ASEAN member states are growing at a fast pace, and they are considered to be young and dynamic markets for the future,” a KITA official said.

“To extend trade and investment in ASEAN, Korea needs to take an approach that fits the needs of each country and for specific conditions.”

In fact, Korean companies have been shifting their strategies from using the region as a production base to advancing into service sectors and growing local consumption markets.

Hong Joon-pyo, a senior analyst at Hyundai Research Institute, said companies should refrain from investing in a few fast-growing countries.

“In 2018, trade with Vietnam accounted for 42.7 percent of trade between Korea and the 10 ASEAN member states. Foreign investment was highly concentrated in Vietnam and Singapore,” Hong said.

“In order to avoid unexpected economic crisis, companies should diversify the geography of investment.”

The government said it plans to reinforce regional trading bloc and bilateral free trade agreements (FTAs) to enhance cooperation with the region.

The industry ministry vowed to promote bilateral FTAs with countries like the Philippines and Malaysia, following a Comprehensive Economic Partnership Agreement (CEPA) between Korea and Indonesia concluded in October.

It will also finalize and sign the Regional Comprehensive Economic Partnership (RCEP) next year.

This comes in line with President Moon Jae-in’s New Southern Policy that aims to boost economic ties with ASEAN to shrug off heavy reliance on China. The government set a goal of raising bilateral trade to $200 billion by 2020.

The Korea-ASEAN Commemorative Summit is scheduled for Nov. 25 and 26 in Busan in celebration of the 30th anniversary of the two sides’ dialogue relations.