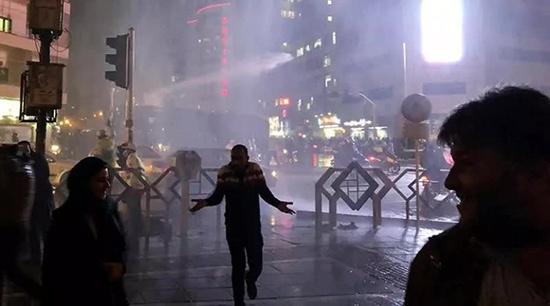 Deputy Commander of the Islamic Revolution Guards Corps (IRGC) for Coordination Rear Admiral Ali Fadavi deplored the foreign support for recent violent protests in Iran and said the US officials’ evil deeds regarding the riots were so blatant.

“For 40 years, the US has committed evil deeds against the Islamic Revolution and for 40 years, it has been defeated,” Rear Admiral Fadavi told reporters in Tehran on Sunday.

In the recent riots, the mischief and evil deeds of the Americans and their followers were blatant, and they themselves declared this, the commander added.

The Americans saw what a heavy defeat was inflicted upon them within 48 hours, he said, referring to the security forces’ success in controlling the riots in Iran within 48 hours.

“Our message (to the enemies) is the same message 40 years ago but the difference is that we are getting stronger day by day as we move forward,” Rear Admiral Fadavi stated.

Following a hike in the price of gasoline last week, a number of Iranian cities saw sporadic protests that turned violent in some cases. A number of banks and government buildings were set ablaze.

Meanwhile, anti-Iranian media outlets as well as some Western officials voiced their support for the rioters who took advantage of the protests in a number of Iranian cities.

In an address last Sunday, Leader of the Islamic Revolution Ayatollah Seyed Ali Khamenei warned that the sporadic protests and acts of vandalism in Iran would create insecurity.

Describing insecurity as the worst calamity for society, the Leader said that “all evil centers in the world” have mobilized efforts in recent days to encourage unrest in Iran.

Ayatollah Khamenei also called on the Iranian authorities to be careful that the rise in the price of fuel would not increase the price of other commodities.

The Leader also called on the people to separate themselves from a group of thugs who are encouraged by the foreign-based anti-Iranian front to foment insecurity.

Tasnim News Agency is a private news agency in Iran launched in 2012. Its purpose is to cover a variety of political, social, economic and international subjects along with other fields