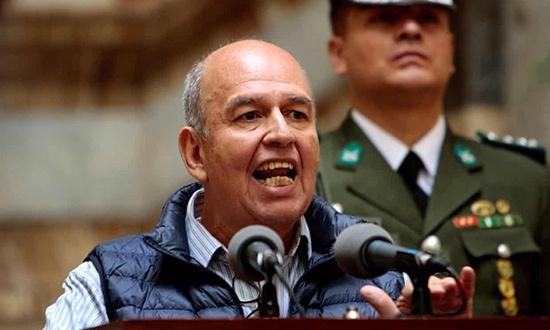 Arturo Murillo speaks to the media in La Paz. He says a recording shows the former president giving orders that would lead to citizens being starved. Photograph: Reuters

The interior minister of Bolivia’s rightwing interim government has vowed to jail the former president Evo Morales for the rest of his life, accusing the exiled leftist of inciting anti-government protests that he claimed amounted to terrorism.

In an interview with the Guardian, Arturo Murillo claimed Morales had been orchestrating efforts to “strangle” Bolivian cities by ordering followers to erect roadblocks that would starve its residents of fuel and food.

Murillo claimed that an audio recording – which supposedly shows Morales giving such instructions – was definitive proof of the alleged crime and said he was “200%” certain it was genuine.

“This is terrorism and this is sedition,” he said. “We have asked for the maximum sentence … of 30 years in prison.”

Murillo added: “Any terrorist should spend the rest of their life in prison – any terrorist – Evo Morales or whoever. It’s not about whether you’re an ex-president or white or black or a campesino … In fact, it’s even worse when it’s an ex-president. An ex-president should be sentenced twice over because people trust in their president.”

Speaking to the Guardian in Mexico City, where he has received asylum, Morales rejected the accusations as “harassment” designed to prevent his return to Bolivia.

However, he declined to rule out the audio recording being genuine. “I talk to everyone who calls me. Sometimes I don’t know them. Sometimes they seek guidance,” he said.

Murillo, who is now responsible for public security in Bolivia, is one of the leading members of a rightwing caretaker government that took power after Morales fled overseas on 11 November. Morales, 60, left after Bolivia’s police and military withdrew their support following allegations of fraud in October’s disputed presidential election.

With Morales thousands of miles away, Bolivia’s new governors have launched a propaganda campaign aimed at annihilating the leftist’s reputation and legacy. Adverts on Bolivian television depict the country’s first indigenous leader as a chaos-sowing provocateur who has brought turmoil to its streets.

“Evo is summoning people to confrontations. Evo is not letting food reach the cities,” one advert claims. “The people want peace.”

In an attempt to paint Morales as a power-crazed authoritarian, Bolivian journalists were given an official “tour” of his supposedly luxurious apartment in the recently completed £26m Casa Grande del Pueblo in La Paz.

Murillo attacked Morales as part of a group of “fake lefties … who sought nothing but power” and claimed he was finished politically.

He said he was not worried targeting a leader who still enjoys significant public support might spark further unrest. “I don’t care how much it inflames things … in life you have to take risks and have the bravery to put things in order.”

“Evo Morales has lost his political career – he has lost it all – and he will never be candidate to anything else in this country,” Murillo insisted, claiming that Morales’s crimes were so bad that “he even runs the risk of Mexico asking him to leave the country”.

Murillo rejected the portrayal of Bolivia’s new government as a coven of rightwing Bible-bashers with little interest in its indigenous majority.

The interim president, Jeanine Áñez, is a conservative Catholic who has posted racist Twitter messages belittling indigenous Bolivians and declared herself interim president while clutching a huge Bible.

The desecration of the multi-coloured indigenous Wiphala flag by security forces in the days after Morales’s flight has also caused outrage.

But Murillo denied the administration was anti-indigenous. “My grandmother wore polleras [the pleated skirts used by indigenous women in Bolivia],” he insisted.

“I have a white face. My mother is Croatian. And my father’s mother wore polleras. What problem could I have with being indigenous?” he asked.

“Please, this is a mixed country, absolutely mixed. And it’s a lie that there’s a confrontation going on between the Indians and the whites. No. It’s totally wrong. This has never happened.”

Murillo admitted, however, that he felt little affection for the Wiphala.

Asked which global figures he admired, he cited Pope John Paul II (“he was a true Pope”) and criticised Pope Francis, who “has occupied himself a great deal with supporting communist governments but never worried about what these governments were doing”.

“I’m not a religious fanatic [but] I believe deeply in God,” Murillo added. “I wake up and go to sleep with Him – and I always ask Him to guide me.”

Critics have questioned the dramatic policy changes already implemented by Áñez’s government – such as cutting ties with Nicolás Maduro’s Venezuela.

“We’re being governed by the four per cent,” complained one official from Morales’s Movement Towards Socialism (MAS) party in reference to the share of the vote Áñez’s candidate secured in October’s election.

Jim Shultz, the founder of the Bolivia-focused Democracy Centre, said the government was “doing everything wrong”.

“They don’t have a mandate to do anything other than keep the seat warm until there can be clean elections. But that is not how they are acting – and that is a huge mistake for the country,” he said.

“The impact is that it feeds this narrative of ‘this government has just been stolen’. That, ‘You see those crazy rightwingers … really are trying to seize power in the country’,” Shultz added.

Diego von Vacano, a Bolivian political scientist from the Texas A&M University, said he believed “a pretty significant purge” of Morales’s supporters and his pro-indigenous policies was under way.

“I don’t think it’s a good idea. Evo did transform Bolivia from almost an apartheid state into something better. He made obviously a lot of mistakes but Bolivia should assimilate those positive changes instead of trying to erase them and go back to something before Evo.”