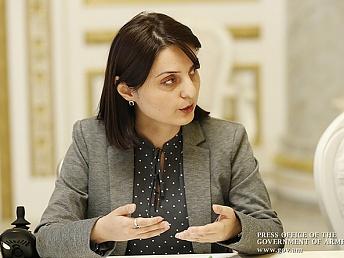 YEREVAN, November 26. /ARKA/. The Armenian law on prevention of family violence and protection of victims of family violence needs revision, Armenian Labor and Social Affairs Minister Zaruhi Batoyan told ARKA News Agency. “Experience shows that the existing mechanisms are not enough for cooperation with the police, government and other agencies,” she said.

And therefore, she said, the government has already made a number of decisions ensuring the application of this law. In particular, the scheme for creating asylum facilities, their minimal standards and financial support are already determined.

According to the Armenian Police Department’s figures, 2,682 family violence reports have been received over the first ten months of this year, of which 1,533 were registered. Investigations have been conducted into 375 family violence cases over the mentioned period of time against 585 cases at the same period a year before.

It has become known earlier that psychological support centers for victims of violence will be established in Armenia’s all provinces starting from 2020. This measure is designed as an important instrument for lessening violence in families. The changes also imply payment of AMD 100,000 to 150,000 to violence victims as financial assistance.

On December 13, 2017, the Armenian National Assembly amended the law on prevention of family violence and protection of victims of family violence. The amended law ensures availability of justice, protection as well as psychological, legal and social support to victims of violence. The law also empowers particular state agencies to establish peace in families and points out various social means for settling things and restore peace and tolerance in families.

On January 31, 2018, special law enforcement divisions were formed in Armenia by the government’s order. They started operating already on June 30, 2018.