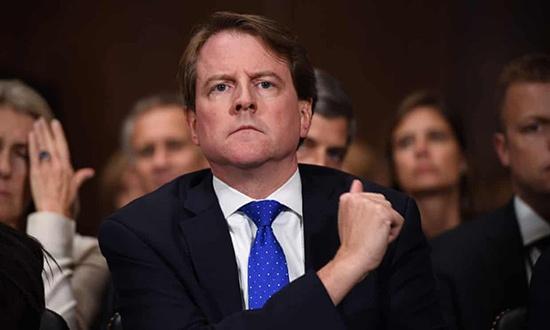 Don McGahn during the US Senate judiciary committee confirmation hearing for Brett Kavanaugh in 2018 on Capitol Hill in Washington DC. Photograph: Saul Loeb/Pool/AFP via Getty Images

A federal judge has landed a damaging blow on Donald Trump in the US president’s ongoing fight with Congress, ruling that the former White House counsel Donald McGahn must testify in the impeachment hearings despite claims that he had “absolute immunity” as a top presidential adviser.

The judgment from Ketanji Brown Jackson, of the US district court in Washington, has potentially far reaching implications for Trump as he struggles to fend off impeachment. Not only is McGahn an important witness in his own right – as Trump’s first White House counsel he had broad influence until he left the post in October 2018 – but the ruling could also affect other key witnesses called before Congress.

Those high-value witnesses include John Bolton, the former national security adviser who is reported to have been deeply unhappy about Trump’s posture on Ukraine, Bolton’s deputy Charles Kupperman and the current acting chief of staff, Mick Mulvaney. In each of those cases the White House has deployed the same argument – that the officials were so core to executive functions that they enjoyed immunity in the face of congressional subpoenas.

Jackson’s ruling has blown a large hole in that legal argument. In terms that left no room for ambiguity, the judge scathingly remarked that the White House had got its separation-of-powers thinking in relation to the respective standing of the president, Congress and judiciary “exactly backwards”.

Pointedly, the judge added: “It is a core tenet of this nation’s founding that the powers of a monarch must be split between the branches of the government to prevent tyranny… Stated simply, the primary takeaway from the past 250 years of recorded American history is that presidents are not kings.”

It was the role of the judiciary to interpret the law and of Congress to conduct investigations of suspected abuses of power by the government, she wrote in the 120-page opinion. The Department of Justice’s claim “to unreviewable absolute testimonal immunity on separation-of-powers grounds … is baseless, and as such, cannot be sustained.”

Adam Schiff, the chair of the House intelligence committee and key Democratic figure in the impeachment inquiry, called the ruling a “very significant victory”.

“With today’s ruling, the courts have made it absolutely clear … that absolute immunity is not a legitimate basis by which to prohibit senior White House officials from testifying before Congress.”

The justice department instantly moved to appeal the decision, rendering an appeal hearing inevitable and opening up the possibility that such a fundamental dispute over where power lies in modern America will end up at the door of the US supreme court. In the short term, though, the immediate question is whether the Democrats in control of the impeachment process in the House of Representatives will be able to use this legal opening to oblige McGahn and other crucial witnesses to testify.

McGahn has already spent many hours in front of the special counsel on the Russia inquiry, Robert Mueller. His testimony may be important in determining whether obstruction of justice is included as a grounds for impeachment.

The House judiciary committee is still investigating whether Trump tried to have Mueller himself sacked, as recorded in the Mueller report citing McGahn. Jerrold Nadler, the committee’s chair, said in a statement following the ruling that McGahn was “a central witness to allegations that President Trump obstructed special counsel Mueller’s investigation … Now that the court has ruled, I expect him to follow his legal obligations and promptly appear before the committee.”

The House speaker, Nancy Pelosi, said that multiple court rulings had made the point clearly: “The president’s insistence that he is above the law is an offense to our constitution and to every American”.

Bolton and Mulvaney promise to be critical witnesses should they eventually be forced to testify in the impeachment hearings under Jackson’s ruling. Several officials who have already appeared before Congress have named Bolton as having disapproved of attempts by Trump’s inner circle to coerce or bribe Ukraine by withholding military aid and an Oval Office welcome for the country’s new president unless an investigation was publicly launched into Joe Biden and his son Hunter.

Bolton reportedly objected to the desired arrangement in lurid terms, calling it a “drug deal”.

Mulvaney has become more deeply implicated in the Ukraine scandal this week after new secret documents emerged from a confidential White House review. According to the Washington Post they show that Mulvaney had tried after the event to create a justification for why almost $400m of military aid to Ukraine had been suspended that would obscure its role as part of the quid pro quo.