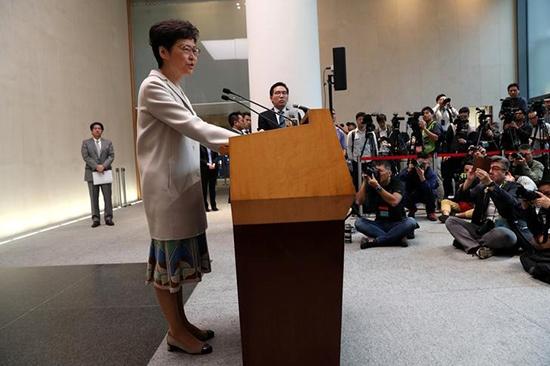 Hong Kong leader Carrie Lam acknowledged on Tuesday that the record turnout in local elections won by opposition, pro-democracy candidates highlighted dissatisfaction with her administration, while appealing for an end to violent protests.

Appearing tired and drawn, Lam spoke a day after results showed democratic candidates secured almost 90% of 452 district council seats in Sunday’s elections, a landslide victory in polls that were widely seen as a barometer of the opposition to the Beijing-backed leader.

Hong Kong’s most unpopular post-colonial leader acknowledged voters wanted to express their views on many issues, including”deficiencies in governance”.

Speaking in measured tones, she thanked residents for voting peacefully and hoped the calm weekend was not just for the elections but a signal that residents want an end to unrest that has rocked the Chinese-ruled city for six months.

“Everybody wants to go back to their normal life and this requires the concerted efforts of every one of us,” Lam said during her weekly address at the government’s headquarters.

“So, as I have said repeatedly, resorting to violence will not give us that way forward. So please, please help us to maintain the relative calm and peace … and provide a good basis for Hong Kong to move forward.”

Some observers say Lam, who came to power in 2017 on a platform to heal social divisions, is out of touch with the population and won’t say anything concrete unless Beijing gives her the green light.

“There’s no content in her talk, which is usual,” said Ma Ngok, political scientist at Chinese University of Hong Kong.

“The majority of the people still support the(pro-democracy) movement so it is up to them (Beijing) to respond. If they don’t respond with any kind of concessions, I think the protests would go on for some time.”

The Asian financial centre has enjoyed a rare lull in violence for nearly a week, breaking from six months of often violent anti-government unrest that has plunged the city into its biggest political crisis in decades, creating the greatest internal challenge yet faced by China’s President Xi Jinping.

As demonstrations roil Hong Kong, the Chinese leadership has set up a crisis command center on the mainland side of the border and is considering replacing its official liaison to the restive semi-autonomous city, people familiar with the matter said.

Protests have sprung up on an almost daily basis since June, with flash mobs often gathering with little or no notice, at times forcing the government, businesses, schools and even the city’s international airport to close.

The violence had escalated up to last week, with protesters hurling petrol bombs and firing arrows at police who responded with tear gas and rubber bullets.

Demonstrators are angry at what they see as Chinese meddling in the freedoms promised to the former British colony when it returned to Chinese rule in 1997.

China denies interfering and says it is committed to the”one country, two systems” formula put in place at that time. Police say they have shown restraint in the face of potentially deadly attacks.

While calm has descended across most of the city, a small group of protesters remain holed up in Polytechnic University, surrounded by police following extreme clashes in the run-up to elections.

Lam urged the protesters at the sprawling campus on Kowloon peninsula to leave peacefully as soon as possible.

University authorities estimate as many as 50 protesters may be hiding, too frightened to attempt an escape. Some protesters’ estimates were lower, suggesting just a handful remain.

The anti-government demonstrations bolstered support for democrats in Sunday’s elections, with a record three million people casting their vote.

The pro-democracy parties overwhelming victory poses a conundrum for Beijing and piles pressure on Lam, who is facing renewed calls to step down. The democrats took control of 17 out of 18 district councils.

A full-page advertisement on Tuesday in Hong Kong’s Sing Pao newspaper by a “group of voters who safeguard Hong Kong’s future” read: “In the past five months, the public demands have been clear. Carrie Lam, what have you heard? What have you changed? Do not dwell on empty talks about deep reflection, resignation is the only result.”