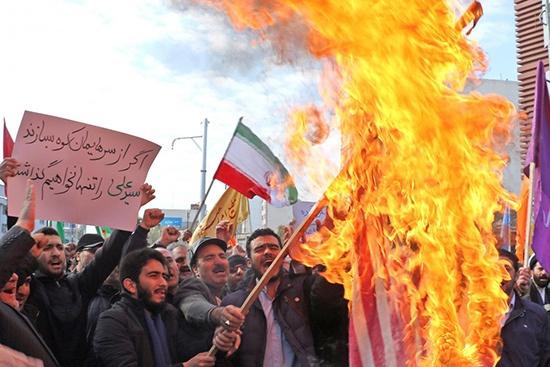 Mahan Abedin – MEE
The latest unrest will encourage Iran’s national security establishment to step up its challenge to US power in the region.

s the world struggles to understand what’s going on in Iran in the midst of an internet blackout, one thing is clear: the widespread rioting and looting does not pose any political threat to the Islamic Republic.

What started off as scattered protests against a petrol price hike quickly degenerated into acts of rioting and vandalism which then elicited a harsh state crackdown.

There are two striking features about the unrest. Foremost, the Iranian middle classes have boycotted the protests, fearing the unrestrained violence of the rioters who have torched banks, police kiosks and even hospitals. The protests occurred in the poorest areas of towns, or in the case of Tehran, in the poorest satellite towns of Greater Tehran province, such as Islamshahr, Shahriar and Gohardasaht (a neighbourhood of Karaj in Alborz province).

In Tehran itself, there were no protests at all, save for minor incidents in the poorer eastern districts of the city such as Pirouzi and Tehranpars.

Second, the Iranian political system has talked and acted in unison by both condemning the riots and promising a harsh crackdown. One hardline newspaper editor even broached the idea of hanging riot leaders.

This speaks of deep coherence and unity in the establishment, something that had eluded the Islamic Republic for nearly four decades.

In other words, the nature of Iran’s political system has changed and this shift comes into sharp focus during a crisis or upheaval, such as the recent protests.

The Islamic Republic can no longer be described as “factional” or “fractured” as it used to be for decades. Ironically, this unity elicits violent protests as disgruntled people can no longer appeal to – or exploit – divisions within the system to advance their cause or gain an advantage.

This shift has immediate consequences for Iranian foreign policy, as hinted by Iranian leader Ayatollah Ali Khamenei. Iran will now act more confidently – and possibly more aggressively – in the standoff with Israel, Saudi Arabia and the United States.

The mainstream international media has tried to frame the protests through the prism of the all-too-familiar context of economic-driven grievances rapidly escalating into anti-establishment riots.

By contrast, the Iranian establishment has depicted the protestors as “thugs” and hoodlums directed by foreign powers.

At Friday prayers in Tehran on 22 November, Ayatollah Seyed Ahmad Khatami claimed that the “enemies” had been preparing for the disturbances for three years.

The theme of foreign interference has loomed large in the analysis of Iranian leaders.

The country’s supreme leader Ayatollah Khamenei set out the grand analysis by describing the recent events as a “security war”. The fact that the disturbances in Iran came on the heels of the protests in Iraq and Lebanon has cemented the belief within the Iranian leadership that it is being targeted by the US, Israel and Saudi Arabia as part of a broader destabilisation strategy.

Such a connection may seem far-fetched at face value but it cannot be ruled out altogether. Barely a week before the start of the disturbances in Iran, Turkish President Recep Tayyip Erdogan speculated that the “anti-establishment” uprising in Iraq could spread to neighbouring Iran.

For its part, the US government, which had been anxiously awaiting just such a scenario ever since announcing its “maximum pressure” campaign against Iran last year, has tried its best to fan the flames of revolt and destruction. The US special representative for Iran, Brian Hook, could barely hide his glee at the unrest, all the while pledging to maintain the harsh sanctions regime that have contributed to the rioting.

In the latest development, US Secretary of State Mike Pompeo has called on agitators to submit videos and other information on the “crackdown”. These messages are a clear attempt to foment additional unrest and the US government is foolish if it thinks Iran will leave the provocation unanswered.

The Iranian establishment has been united in confronting the unrest. President Hassan Rouhani echoed Khamenei in declaring victory over “foreign enemies”, and specifically identified the “Americans”, “Zionists” and “regional reactionaries” for fomenting the unrest.

“Regional reactionaries” is a reference to conservative Arab regimes in the Gulf, notably Saudi Arabia and the United Arab Emirates.

President Rouhani’s rhetoric was particularly tough, not least because of his centrist background and his loose and tacit alliance with reformist political currents. As an astute politician, Rouhani has a firm grasp of political realities and his unusually tough rhetoric may be a signal that he is moving away from the reformists to fully embrace the conservatives and principlists (Osoolgerayan).

This political shift may be an early election manoeuvre ahead of parliamentary elections scheduled for February 2020.

The events of the past week are likely to fully complete a process that has been underway for a decade, since the so-called Green uprising following disputed presidential elections in June 2009.

The political earthquake of 2009 heralded the beginning of the end of factional politics in the Islamic Republic, notably a division into Islamic left and right founded primarily on profound differences on economic policy.

As I argued back in July 2009, the Green uprising – and the subsequent crackdown – led to the emergence of a “leaner and meaner” Iranian political system.

This process of purging and catharsis within the Islamic Republic is more or less completed. In other words, Iran’s political society has shifted closer to the security establishment and by definition it is now much harder for foreign powers – notably the West which operated the “moderate” vs “hardliner” dichotomy for decades – to gain advantage by exploiting internal political divisions.

The nature of the latest uprising only serves to underline the wider and deeper political reality.

Whilst the uprising appears to be nationwide, it lacks depth and numbers. By most credible accounts, less than 100,000 people were involved. The Fars news agency – citing an “intelligence body” – reported 87,000 protestors, of which 93 percent were men.

Who’s behind the riots?

The videos produced by the protestors themselves tend to validate these claims. Most videos show very small – but highly aggressive – crowds confronting an assortment of riot police and security forces. The protestors and rioters don’t even appear to be motivated by clear political goals, besides maximalist demands and a rejection of the establishment in its entirety.

They are certainly not connected to any of the country’s recognised political forces. This is in sharp contrast to the much larger protests of 2009-2010, which were essentially an outgrowth of factional disputes. In that context, the latest unrest can be considered a continuation of the late 2017-early 2018 protests, albeit in a more radicalised and violent form.

This makes the authorities’ job much easier in two important respects. First the initial repression is easy as the crowds lack depth and their actions, as demonstrated by vandalism, arson and looting, mean their movement will not resonate with Iranian society writ large, especially the middle classes.

Second, by showcasing the mayhem caused by the uprising, the Islamic Republic can capitalise on it politically, primarily by mobilising its natural constituency in areas hit hardest by the protests and rioting.

The bottom line is that the Islamic Republic’s political society has never been so coherent and united and fully in tune with the country’s security apparatus. This makes it all but impossible for any protest movement – indigenous or foreign inspired – to establish even the flimsiest of footholds.

The most important question at this juncture is what effect the uprising will have on tension points across the region. The Islamic Republic’s hardcore ideologues have let it be known in no uncertain terms that Iran should go on the offensive and retaliate against foreign adversaries, specifically against Saudi Arabia.

This echoes the call of the judiciary chief, Ayatollah Ebrahim Raisi, for “tough punishment” for the rioters and their “masters”. It is widely expected that the most egregious offenders (those found to have led arson gangs and the killing of security forces personnel) could be hanged.

Most important of all – in terms of foreign policy – the secretary of the Supreme National Security Council, Rear Admiral Ali Shamkhani, called for “revenge” for the “martyrs” (i.e. the security forces personnel killed by the rioters).

“All those who used rioting, sabotage, looting and used weapons against the security forces and the people, will certainly be reprimanded and we hope to continue our resistance which is the only way to confront the West,” said a defiant Shamkhani.

Meanwhile, the commanders of the Islamic Revolutionary Guards Corps (IRGC) have gone on the offensive against Iran’s foes, by attributing the uprising to foreign enemies and hinting at possible deterrent actions in the near future. The IRGC’s deputy commander, Rear Admiral Ali Fadavi, has claimed that the US has gone “crazy” at the fact that the disturbances were suppressed by Iranian security forces within 48 hours.

Adopting a more offensive posture, Major General Gholam Ali Rashid, the commander of the Khatam-al Anbiya Central Headquarters, warned the US to act “responsibly” in order to safeguard the lives of its troops.

Speaking on the sidelines of air defence manoeuvres dubbed “defenders of the skies of Velayat 98”, General Rashid claimed that the Iranian armed forces – in the form of the state military and the IRGC – will utilise “all resources” and their intelligence prowess to not only contain threats but in fact to respond to threats in an “offensive” capacity.

General Rashid’s warning comes a day after the American aircraft carrier, the USS Abraham Lincoln, transited the Strait of Hormuz for the first time since its deployment. The upshot is that the latest unrest will encourage Iran’s national security establishment to step up its challenge to US power in the region.

If the United States and its allies thought that fomenting, or – at the very least – encouraging violent unrest in Iran would arrest the Islamic Republic’s strategic momentum, then they are in for a big disappointment.

Mahan Abedin
Mahan Abedin is an analyst of Middle Eastern politics. He is the author of Iran Resurgent: The rise and rise of the Shia state. He tweets @MahanAbedin.