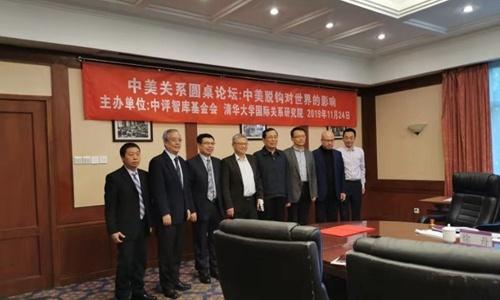 Amid intense strategic competition, where are the China-US relations headed? Will the US really decouple from China and how will the decoupling affect the world? Chinese scholars discussed these issues at a roundtable on China-US relations jointly organized by China Review Think Tank Foundation and the Institute of International Studies, Tsinghua University, on Sunday.

Strategic competition is the new US policy on China. It is a big change from the engagement policy under president Clinton. The US last year published its national defense strategy, shifting focus from the fight against terrorism to major power competition. Currently, the US strategically targets China mainly in the economic and technological domains, which is backed by its moves against the country in fields including politics, diplomacy, military, security and people-to-people contacts. But I think the US policy on China is beyond competition. It’s a mix of suppression, crackdown, containment, prevention and engagement.

China doesn’t focus its US policy on competition, as it doesn’t intend to replace the US in hegemony. Following its reform and opening-up, China laid out three strategic goals for achieving socialist modernization. Based on the current focus of economic and social development, competition with the US is not what China mainly seeks.

Washington is adopting a maximum pressure policy with an attempt to force Beijing to revise trade and investment rules between the two countries. Meanwhile, it is seeking technological decoupling from China. These actions are aimed at thwarting China’s momentum of catching up with the US and its modernization process. It has become clear that the China-US competition is mainly a contest for dominance of the global industrial chain and technology.

The US-launched trade war with China indicates that the external environment for China’s development has undergone significant changes. China must turn pressure into a driving force. It must insist on reform and opening-up to build a higher-level, better and more open market economy.

Jia Qingguo, director at the Institute for China-US People-to-People Exchange of Peking University

Economic decoupling means cutting off economic ties. Now it’s partly becoming a reality that is mainly influenced by two factors. First, US President Donald Trump’s policy of seeking reciprocal trade had a great impact on China-US trade. What the US called “a reciprocal trade,” if realized, will cause a sharp decline in trade volume between the two countries. Second, in the 5G era, if competition in high-tech area cannot be well managed, it may lead to economic decoupling, the possibility of which depends on interactions between the two countries. With mistrust growing rapidly, the possibility of US-China decoupling is rising. But a full decoupling is not likely in the short term.

In the high-tech era, the two countries should act rationally, prevent risks, and avoid confrontation and decoupling as well as maintain cooperation. They should lead the international community to formulate rules in handling risks brought about by advanced technologies.

China and the US are competing in terms of comprehensive national strength and strategy. Because of the rise of developing countries, particularly China, the influence of the West is waning. The international landscape has changed faster than the US expected, leading to Washington’s strategic anxiety. Since Trump assumed office, the US has sought to shape the global order based on the “America First” policy. US strategic adjustments have had a negative impact on globalization, making the biggest power the greatest factor of uncertainty in the changing international situation and the reason for intensifying major power competition.

Meanwhile, China is approaching its goal of national rejuvenation, is getting closer to the center of the global stage like never before and the country’s relations with the world are undergoing unprecedented changes. This has increased the strategic anxiety of the US. Washington hypes up the so-called China threat, defines it as a strategic competitor and spares no effort in strategically suppressing and containing China. US actions have undermined bilateral relations, global strategic stability as well as global economic cooperation and sustainable development.

Why has decoupling become a buzzword? The US is defending itself, claiming it doesn’t seek decoupling from China while China believes US moves are aimed at severing ties. The fact is Washington is acting differently from the past.

The US is recalibrating its China policy in keeping with the times. It has realized that the approaches it adopted in competing with the Soviet Union cannot be applied to China nowadays. The US now claims it doesn’t seek to decouple from China, nor does it pursue containment or confrontation. Why? I recently visited the US. What I learnt is the US believes its China policies over the past few decades since the founding of the People’s Republic of China all failed and it has to adopt a new policy. So it’s very likely the US is exploring how to decouple from China. It’s a new strategy in US history.