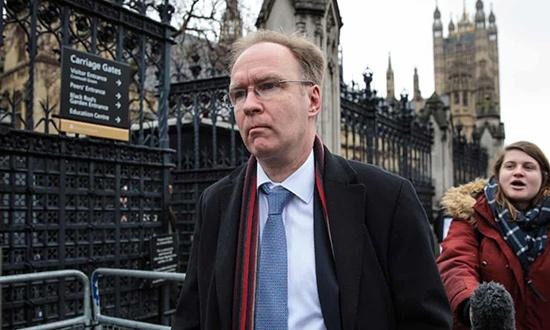 Jennifer Rankin in Brussels  –  The  Guardian

Boris Johnson is sowing the seeds of “the biggest crisis of Brexit to date”, Britain’s former envoy to the EU Sir Ivan Rogers has said in a scathing verdict on the government’s “diplomatic amateurism”.

Less than three weeks before polling day, the man who resigned as the UK’s EU ambassador in January 2017 said Johnson was repeating Theresa May’s “strategy errors” and would soon find himself “unwisely” boxed in by his campaign promises.

When he launched the Conservative party manifesto on Sunday, Johnson repeated his promise not to extend an 11-month transition period that kicks in if the UK leaves the EU with the withdrawal agreement on 31 January 2020. Negotiating a trade deal with the EU in an unprecedentedly quick time is the centrepiece of the prime minister’s misleading pledge to “get Brexit done”.

In a lecture at Glasgow university on Monday night, Rogers, who resigned following a Tory backlash over his reports that an EU trade deal might take a decade, said “the biggest crisis of Brexit to date” was “virtually inevitable” in late 2020.

“In practice, this prime minister is, for all his talk of getting Brexit done, now basically replicating the strategy errors of 2016 and 2017, which brought his predecessor down,” he said. “This is diplomatic amateurism dressed up domestically as boldness and decisiveness.”

While the UK could get a “quick and dirty” trade deal by the end of 2020, Rogers said it would exclude the UK services industry and give the EU leverage over fishing rights in British waters.

“It all points to a repetition of exactly the syndrome we have suffered for the last three [years]. And a repetition of myopia on which ultimately lands us with a poor and deteriorating relationship on multiple things that really matter, economically and strategically,” he said.

The pressure to “get Brexit done” will mean that if returned as prime minister, Johnson will soon make “a lot of concessions” to secure his deal.

“Because we are under time pressure and known to be desperate to ‘escape vassalage’ by the end of 2020 … the EU side just sees a huge open goal opportunity and repeats its playbook from the article 50 process,” Rogers added.

He argues that the UK could get a basic free trade agreement by the end of 2020, which he calls “a very thin, Canada minus minus deal” in reference to the Conservatives’ preferred model. But he also said the two sides risk heading to “a no-trade deal” in the short to medium term and “a very difficult relationship after that”.

Rogers, who held senior roles in No 10, the Treasury and the European commission, skewered claims made by Johnson and frontline cabinet ministers such as the chancellor, Sajid Javid, that trade talks with the EU would be fairly simple because both sides are starting from a position of regulatory alignment.

“The fact of ‘being aligned on day one after exit’ does not make the negotiation of a trade deal easier,” Rogers said. “The only relevant question is where you aim to be on day two, day 200 or day 2,000.”

In a passage Johnson might envy as a former newspaper columnist, Rogers said there would be “no escape from ball-achingly technical and lengthy negotiations” on the small print of free-trade deals. He is equally blunt about the claims of unnamed former UK trade ministers on the ease of trade talks: “One can only watch and marvel at what planet they inhabit.”

The former ambassador did not spare Jeremy Corbyn, although he gave less attention to the Labour leader. Rogers gives a withering verdict on Corbyn’s neutral stance on any second referendum, as well as his pledge to “get Brexit sorted” within six months of taking office. The Labour position “frankly deserves the Brussels eye-rolling it duly gets”.

He also said remainers who wanted to wind the clock back were in “denial” about EU thinking.

In keeping with previous lectures, Rogers accused the EU of failing to think through the strategic consequences of its relationship with the UK.

EU politicians have long insisted that the UK must make up its own mind about what kind of post-Brexit relationship it wants. Rogers said the EU was being too simplistic, by failing to have a collective preference about a relationship that “hugely matters” to them.

“Brexit could have represented – could surely still represent – something of an opportunity to think about differentiated integration,” he concluded. “It’s time for the EU to think more clearly and strategically about its future relations with the UK, because they can get a lot worse than this yet.”